Exit Interview is an occasional series profiling veteran sustainability executives as they leave their jobs and companies.

In 1992, Andrea Asch answered an ad in the Burlington Free Press for the manager of natural resources at Ben & Jerry's. At the time, she had been working for an environmental engineering firm doing hazardous waste cleanup. "I went from the hazardous waste industry to the hazardous-to-your-waistline industry," as she puts it. I met Asch soon after she joined the company and watched her steward the iconic ice cream company’s sustainability journey.

This week, after 26 years, Asch will depart Ben & Jerry’s. We recently discussed her career and the evolution of the company’s environmental mission, which pretty much go hand in hand. The conversation has been edited for clarity and length.

Andrea Asch: It was right on the heels of making Chocolate Chip Cookie Dough, which was a major success. All we did was frantically make Chocolate Chip Cookie Dough morning, noon and night. And there was this notion that we really had to look at the environmental part of our business. While there was plenty of passion and interest in the social side of the company, there was really not a lot of attention paid to the environmental side.

The job description was written for me to design whatever I wanted. So, I had a clean palette. Coming from a regulatory and science background, I wanted to put some discipline and some baseline information in place. You can't set a direction if you don't know where you're starting from.

How do you engage people to do the right thing? That's always been a big part of my job: engaging people.

So, I measured everything at our plant at the time in Waterbury, which is of course our biggest tourist attraction here in Vermont. And we were in the process of building a state-of-the-art manufacturing plant in the northern part of the state, and I did all the permitting for that work. I was able to lean on my experience in regulatory compliance and in science, but also look at the human interaction. How do you engage people to do the right thing? That's always been a big part of my job: engaging people.

Asch: It was really about still being that funky, chunky, new-way-of-working type of business. Everybody was completely passionate about what we did. We were really outspoken around social issues, writing an annual report, which people just didn't do then. You didn't have a mission statement that you publicized, if you even have one. You didn't publish the good, the bad and the ugly in your annual report, which is what we did.

There was no fear. We just did what we felt was right as a business. We gave away a lot of ice cream. We had our One World/One Heart festivals. We just kind of opened our arms wide and pulled anybody who would want to join us on this journey around our social mission, and the beginning of our environmental program, but really about us as an ice cream company with the notion that there was "caring capitalism." You could give back to your community, and the vehicle for doing that was ice cream.

Makower: Rainforest Crunch was the company’s first significant environmental initiative, back in the late 1980s. What was the mindset in terms of how Ben & Jerry's wanted to show up in the world environmentally? 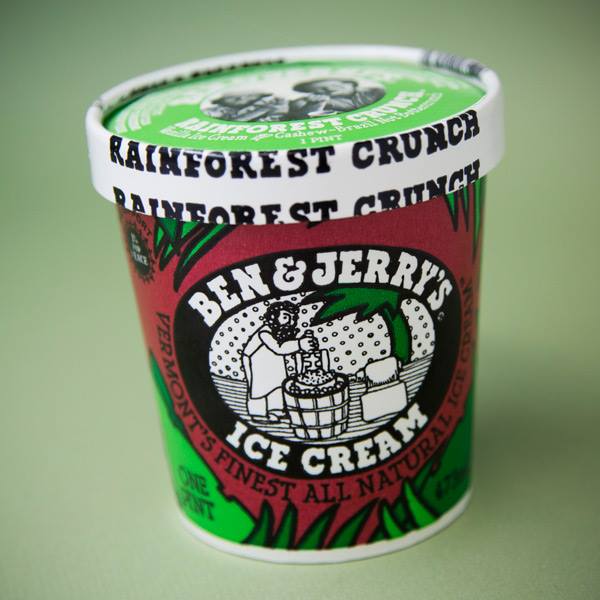 Asch: A lot of the Rainforest Crunch sourcing process was about using the power of our business to purchase an ingredient that had another attribute to it, other than just the nuts. It had a purpose to it, and that was about raising the awareness around the rainforest, around sourcing ingredients that would have a benefit to the communities in which those nuts were harvested.

But nobody followed suit, and we had to make some changes to support better whitening techniques. Those are some of the projects that were very strongly rooted in our business the belief that we could use the power of business to affect change.

Makower: Unilever purchased Ben & Jerry’s in 2000. How did that change things?

Asch: I'd say the question I get asked probably most frequently, "So what's it like now, being owned by Unilever?" And I say, "Oh, you mean for the past 18 years?"

I would not have stayed with the company if my values would have been compromised. A lot of opportunities have been presented to me by being a part of Unilever. It's never without its challenges, of course, working for a large multinational. Having Paul Polman at the helm of Unilever has been incredibly beneficial, and for us here at Ben & Jerry's, having Jostein Solheim as our CEO has provided great leadership.

Makower: What has Ben & Jerry’s relationship been with the activist communities? I'm sure a lot of it's been really good because of the hero nature of the brand, but I know that a lot of leadership companies become targets, too.

Asch: We have great big targets on us. There's always a steady line of activist groups that want us to take on their particular cause, and they will stay relentlessly at us until we address what their particular concern is. Or perhaps we're already doing it but we just haven't communicated what we are doing.

There's always the external communication piece that is very targeted to our core consumer base, but we also do a tremendous amount of work that we don't necessarily communicate. You can read about it in the social and environmental assessment report that we publish every year. We don't hide behind what we're doing, but we may not always talk specifically about what we're doing, because it's just the way we do business.

Makower: Does it feel sometimes kind of unfair?

Asch: It does feel unfair, absolutely, because I feel like as a company we've done some amazing work, and just because we don't necessarily talk about it — I guarantee you, not every company talks about everything that they do. It's just either not feasible, or they choose not to.

Makower: How do you feel about the pace of change that you've been able to make?

Asch: Being in the environmental field, you can either see the glass half full or half empty, and I always see the glass half full. I love the rate of change in many areas. I think change is good, and especially in the environment field, as there's greater awareness, better passion around the issues, better communication. I think there are a lot of passionate people out there. 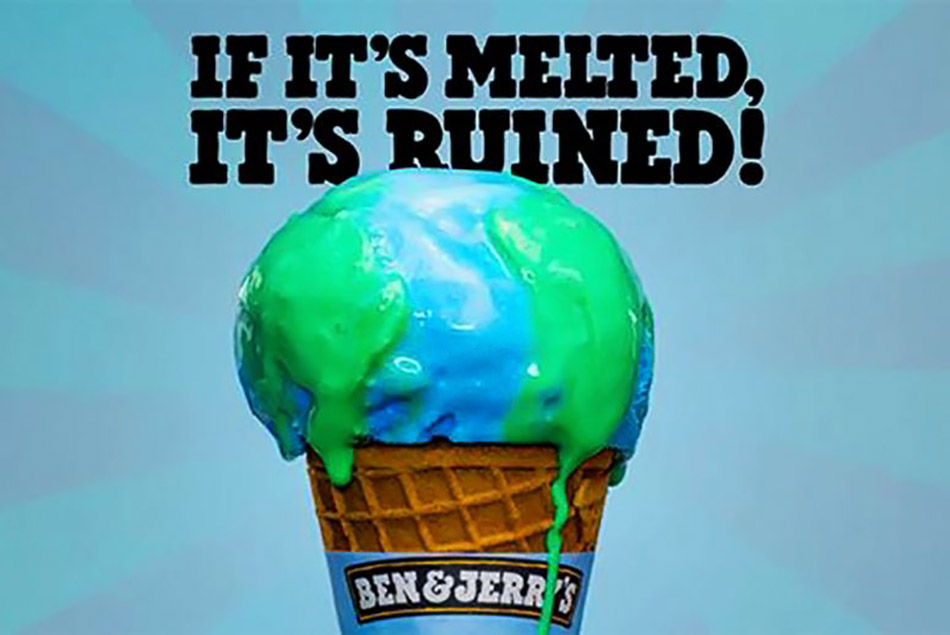 Do I think some of it is moving too slowly? Of course. I have a lot of big concerns that all of us want addressed. But as individuals, it's hard to do, when you talk about issues like climate change, population, the loss of topsoil. To me, those are three really critical issues that are all heavily intertwined. How do we as an industry affect change, and how do we do it before it's too late?

That concerns me, certainly, but I see more companies taking on environmental roles in their business, hopefully not just as lip service, but doing really good work.

Makower: If you're like most people in this industry, you get a lot of young people coming to you for career advice, mentorship, informational interviews or jobs. What do you tell them about getting a job like yours?

Asch: I love getting those calls because when I was in graduate school I had a person that I cold-called, and that was of course well before electronics. I had to pick up the phone and call. He answered the phone and spent a ton of time talking to me. I'll never, ever forget that.

And that's my pay-it-forward. I'll always talk to students. They'll ask me, "So how do I get your job?" And I tell them. I was stunned when I got the job. I asked, "How come you hired me?" And they said, "Because you put your volunteer work on your resume."

That is something that I tell everybody I speak to. Never forget the community that you live in or that you're passionate about. Even if it's volunteering one day a week, get some experience that's different from what you perhaps have academically trained for, to give yourself a different perspective.

I also tell them that it's important to have a good science background. Understanding how systems work, how ecological systems work, how you think and process analytically information, is really valuable in any business. If you can look at business from a systems point of view, I feel that you'll have greater success.

Makower: I've been to the Ben & Jerry's offices, and it seems like a fun place to work. Is that the reality?

Asch: There was a post on Facebook that had six boxes. It says, "This is what the customers think we do," and it's handing somebody an ice cream. "This is what my mother thinks I do." In the last box, the person is sitting in front of their computer. And that is the reality.

We all work really hard. On the other hand, we have a slide in the middle of our office. We have freezers full of ice cream. We have Scoop U, where we train new managers how to run a scoop shop. Employees can get an ice cream for a buck.

People leave thinking, "Oh, I've had it here," and they go someplace else. Many come back and say, "Wow, the grass isn't always greener." I've had opportunities to leave the business, but I feel incredibly privileged that I've had the best environmental job for a company that reflects my values, and that I've had a wonderful 26-year career.

Has it always been bubble gum, roses and ice cream? Of course not. But I really feel I've been incredibly privileged to have the career that I've had.