Last week, Bob Langert retired after 32 years at McDonald’s Corp., 27 of them heading the company’s environmental and sustainability operations. His was a remarkable run for a sustainability executive — not just in its duration, but in the wide range of challenges he encountered and addressed along the way, and the many sustainability innovations he helped his company roll out — most of them unseen and unknown by the hamburger-eating public.

I’ve known Langert since the early 1990s and long admired the passion and perseverance he brought to his work and his company. Last month, at the 2015 GreenBiz Forum, I conducted an on-stage interview with Langert, from which this Q&A has been adapted (and edited for clarity and length). You can watch a brief video excerpt from the interview below.

One additional note: Starting today, Langert is joining GreenBiz part-time as an editor at large. He’ll be contributing a regular column and working with the GreenBiz Executive Network, our peer-to-peer learning forum for sustainability executives.

Joel Makower: Give us a capsule version of your trajectory at McDonald’s. You haven't been in sustainability all of those 32 years.

Bob Langert: I started out in charge of 75 truck drivers who distributed food and paper to our restaurants. I was in charge of Golden Arch Express, which was a little trucking division that was supposed to be making money. It was not. I was hired in to make money. After a year, we were still losing money. So we sold that and I had no job. I’d thought that's what I was going to be doing the rest of my life.

They looked at me and said, "What can Langert do?" So they gave me this temporary environmental assignment to save the polystyrene clamshell — which I failed at, as you know — and also to phase out chlorofluorocarbons. That was 1988.

I'm a product of the '60s. I believe in the social revolution of the '60s: Bob Dylan; Neil Young; Crosby, Stills, Nash and Young. I read every book on John F. Kennedy and Bobby Kennedy. I saw Martin Luther King march in a local park. This was in my blood. So when I had that temporary assignment, I thought, "This is for me." And it's been a wonderful journey ever since.

Makower: The EDF-McDonald's partnership you created in 1989 is iconic. People still hold it up as an exemplar of corporate-NGO partnerships. What was the driving issue at the time?

Langert: At the time, McDonald's was a symbol of waste and a disposable society. Everybody loved McDonald's up until the late '80s. Then all of a sudden we had kids not liking us, sending polystyrene packages to our CEO. We had never experienced that before.

So we said, "What are we going to do about it?" EDF’s Fred Krupp came to McDonald's with this idea. And he took a lot of criticism for working with McDonald's back then.

When we did this work with EDF, we reduced 300 million pounds of waste during the '90s. We did a lot of different things to change packaging, not only for McDonald's but for the whole industry. And I thought to myself, "Man, if we could do that with packaging, we should be able to do that with food and agriculture."

So it's always been my mission at McDonald's, with our reach with suppliers and our whole system, to replicate that idea. And ever since then I've been trying to take on tough issues.

Makower: I've known you since the early '90s. There are three things that I find remarkable. One, you've already started to get to, which is your willingness to engage with anyone, particularly any critic. Why were you able to do that?

Langert: I feel like I'm the same as them. I looked at all the people that are very passionate about these issues as like, "Wow, they're passionate about it. So am I." I never looked at any of these people as the enemy. I always looked at them as, "What can we learn from them?" 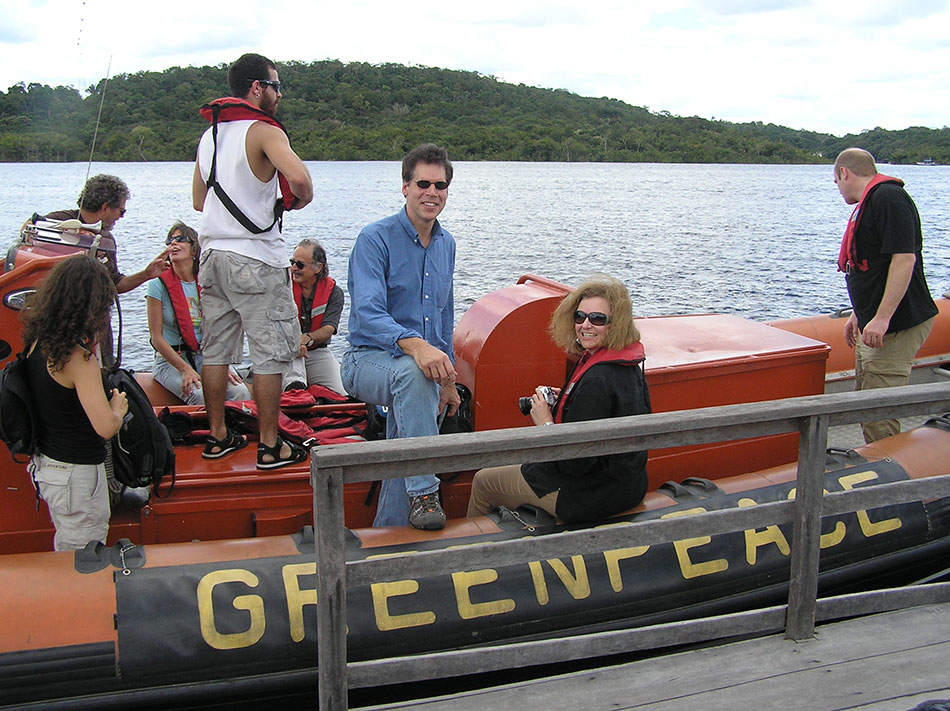 I always assumed that everyone has good intents. I think the intent of Greenpeace and other groups is on helping to change the world. Who are we to view them as the enemy?

I took a trip through the Amazon for nine days with four people from Greenpeace. You wouldn't even know who was from McDonald's and who was from Greenpeace. We have a shared passion. You can find a common interest. If people are willing to compromise, we could come up with great solutions.

That's one of the things I get frustrated about in today's world — all this polarization. I really think compromise and meeting someone in the middle is a good thing, and the work that we've done has been trying to find that spot. Some of my best friends are people from these NGOs. I would love to have them be my next-door neighbor.

Makower: The second thing I find remarkable is that you did whatever you did regardless of whether there would be any recognition or credit. In fact, you even knew that some initiatives were going to get slings and arrows in spite of your best intentions and best efforts.

Langert: We should be able to talk about it oblivious of the slings and arrows. But I admit, our company historically is not the best at it because you get so many slings and arrows, and you get sued over things and commitments you make. It makes you afraid to get out there.

I'll give you an example. We made this commitment to get out of TFAs, trans-fatty acids, in our cooking oil, and we set a timeline of three years. We didn't achieve the timeline. We ended up achieving it after two or three more years. But we had a payout of like a $10 million lawsuit for not meeting the timetable. These are things that make you a little bit gun-shy.

Another story is about soy and the Amazon, and how we worked with Greenpeace and put forth a soy moratorium. But if you ask 100,000 people in America about it, none of them would know it. None would know that McDonald's was so critical to gathering other retailers and working with the soy producers there to say, "Hey, we've got to come up with a different way."

There's nothing more rewarding than working on things that have that type of transformative change.

Makower: The third thing that I find remarkable is your absolute love for your company. Through thick and thin, through up-cycles and management changes, through litter and waste, through climate change and deforestation, through nutrition and wages, you believe in what McDonald's is and does.

Langert: I do love my company and that's why it’s hard to go. I've been into the deep underbelly of McDonald's. I've been at the table seeing the tough issues. I’ve been part of senior management and I've been to suppliers, and I like what I see.

Our reputation and our image obviously is not that way, so it gets frustrating when people see us in a different light than how I see it.

Makower: This is an interesting time at McDonald's because you're managing sustainability through a decline of the business, at least in the U.S. I’m curious how you see the role of sustainability in all this, because you've got competition with fast-casual restaurants — the Chipotles and Five Guys Burgers, which put a little bit more thought into sourcing or talking about where food comes from. And there's a new generation of kids that don't love McDonald's the way that kids traditionally had. That seems to be a big challenge.

Langert: I think you're accurate in depicting the turnaround situation that we have, and it's a global situation for the most part for McDonald's. Our management team sees the sustainability agenda as part of the solution. We've gone through some trimming, some cutbacks and some tough decisions. But the sustainability agenda, budget, resources and strategy is intact.

If you take a look at the sustainability framework that we put out May 1 and some of these bold goals that we have, they're still there. Our new CEO just spoke to all of us in a town hall meeting a couple weeks ago and gave a big shout-out to our mission to buy sustainable beef.

We need to be a more relevant brand to consumers, to your point. And the work of sustainability is going to make us more relevant. Our actions for the future are going to be part of our growth.

How McDonald's is Mainstreaming Sustainability