<p>What happens when fossil-fuel companies&#39; assets are reduced to nothing by carbon regulations or market forces? Shareholders want to know.</p>

ExxonMobil last week agreed to publish a “Carbon Asset Risk” report describing how it assesses its financial risks from climate change, namely a potentially lowered valuation of its oil reserves. The move is being seen by some as a pivotal milestone on the road to a low-carbon economy.

According to the press release issued by the shareholder activist groups that negotiated this, “The report will provide investors with greater transparency into how ExxonMobil plans for a future where market forces and climate regulation makes at least some portion of its carbon reserves unburnable.”

Welcome to the brave new world of “stranded assets.”

Stranded assets is a financial term that describes something that has become obsolete or nonperforming well ahead of its useful life, and must be recorded on a company’s balance sheet as a loss of profit. The term has gained currency in recent years as environmentalists and economists converge to understand and address the implications of policies or market actions that could dramatically could decrease the use of carbon-intensive fossil fuels.

The simple question behind stranded assets is this: If climate concerns means that coal or oil reserves must stay in the ground, never to be mined or pumped, what are the financial risks to oil and coal companies and their shareholders? After all, these companies already will have paid billions for the rights to access these reserves, and may have built infrastructure aimed at bringing them out of the ground and into the marketplace. What are the balance-sheet implications of these massive investments that never will bear fruit?

This isn’t just academic or the musings of green-eyeshade accountants. You'll be hearing more about stranded assets in the coming months and years, as it pervades policy and politics, activism and corporate responsibility discussions. It's a conversation that's just getting started.

Clearly, regulations and taxes — whether at the local, national regional or global level — are just one way that carbon could lead to stranded assets. As Al Gore and David Blood of Generation Investment Management described in a Wall Street Journal piece in October (may require subscription), there is also indirect regulation through increased pollution controls, constraints on water usage, or policies targeting health concerns; and mandates on increased use of renewable energy adoption and efficiency standards. “Even the threat of impending regulation creates uncertainty for long-lived carbon-intensive assets,” they wrote. 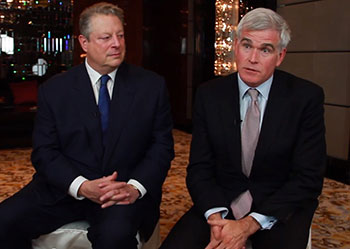 Market forces also could lead to stranded assets, they explained, especially as renewable energy technologies become economically competitive with fossil fuels in many markets. “This cost competitiveness, combined with the ability to secure stable long-term prices for power, and an increase in distributed electricity models, could continue to shift capital allocation way from fossil fuels.”

That last example is behind the ExxonMobil announcement. It is part of a broader shareholder action campaign led by Ceres, As You Sow and socially responsible investors to get large energy companies to acknowledge that the value of fossil fuel assets may be out of line with emerging policies on climate change, and that trillions of dollars in assets hang in the balance. (Ceres has cataloged nearly a dozen shareholder resolutions on carbon assets filed during the 2014 season against fossil fuel companies and utilities.)

The Exxon announcement is being seen as nothing less than game-changing. Jonathan Koomey, research fellow at the Steyer-Taylor Center for Energy Policy and Finance at Stanford University, noted in his blog:

The reason why this development is so important is because once markets realize there’s an arbitrage opportunity, they relentlessly chip away at it until it is eliminated. And the stranded fossil asset arbitrage opportunity is one that’s worth many trillions of dollars. So the pressure will continue to build, and soon the disclosures will result in attention paid to this asset risk that simply hasn’t been present before. That attention will become a flood very rapidly. It’s the beginning of the end of the fossil-fuel economy, but the big players just don’t realize it yet (or if they realize it, they’re not admitting it).

So, as Exxon goes, so goes the industry? It’s too soon to tell, but the dollars involved are simply too big to ignore. And now that the activist crowd has tasted victory, no one is about to let up. 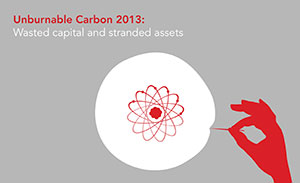 Part of the impetus comes from a related term, “unburnable carbon,” that is also gaining favor, spurred by a 2013 report by that title from Carbon Tracker and the Grantham Research Institute on Climate Change and the Environment at London School of Economics. The report, "Unburnable carbon 2013: Wasted capital and stranded assets" (PDF), concluded that between 60 to 80 percent of coal, oil and gas reserves of publicly listed companies are “unburnable” to keep within the 2° C limit. Which is to say, companies have five times as much oil and coal and gas on the books as climate scientists think is safe to burn.

This coal and gas and oil is still technically in the soil. But it's already economically aboveground — it's figured into share prices, companies are borrowing money against it, nations are basing their budgets on the presumed returns from their patrimony. It explains why the big fossil-fuel companies have fought so hard to prevent the regulation of carbon dioxide — those reserves are their primary asset, the holding that gives their companies their value. It's why they've worked so hard these past years to figure out how to unlock the oil in Canada's tar sands, or how to drill miles beneath the sea, or how to frack the Appalachians.

In his article, McKibben cites John Fullerton, a former managing director at JP Morgan who now runs the Capital Institute. Morgan calculates “that at today's market value, those 2,795 gigatons of carbon emissions are worth about $27 trillion. Which is to say, if you paid attention to the scientists and kept 80 percent of it underground, you'd be writing off $20 trillion in assets.”

Such eye-popping numbers are causing financial analysts at such firms as Citi, HSBC and Standard & Poor’s to take note. And given the potentially massive hit to stock prices, the economy-wide impact could be staggering. In 2012, the Bank of England warned that a collapse in the value of oil, gas and coal assets as nations tackle global warming is a potential systemic risk to the British economy.

A report, "Stranded Carbon Assets" (PDF), from Generation Foundation, the nonprofit arm of Generation Investment Management, looks at the risks this way:

The inevitable transition to a low-carbon economy will revolutionize financial markets at an unprecedented magnitude. Although we cannot, and should not, abandon the world’s current energy infrastructure overnight, investors who equate the transition with drawn-out, incremental change do so at their own peril as the stranding of carbon assets may occur at unforeseen rates and at an unpredictable scale.

The question of how to manage this transition remains open. How do you wind down the fossil-fuel economy in a way that is equitable to shareholders and doesn’t unduly shock the economy — but still recognizes that time is of the essence? Do we, as Gil Friend and Felix Kramer recently mused, simply buy out the coal companies?

While we ponder, a divestment movement is gaining steam, inspired by similar campaigns of yore and no doubt encouraged by last week’s victory over Exxon. Leading the effort is 350.org, whose Do the Math campaign is rallying college students to press their school administrators and trustees to divest which is inciting countless campaigns to press colleges and universities. Charitable nonprofits and pension funds are in their sights, too. As the group explains:

That’s compelling arithmetic that almost anyone can understand.

Image by cmgirl via Shutterstock