It's been a busy year for Facebook's expansion into the data center world. First was the January announcement that it was opening a green data center in Prineville, Ore. Then came the news in August that it was already planning to double the size of that facility. And now comes the news that the company is investing nearly half a billion dollars in another new data center in North Carolina.

The company's Rutherford County data center will cost $450 million to build over the next 18 months, and will boast plenty of the green technologies that Facebook has been touting of late.

Details about the data center are scarce to nonexistent, except for the cost, and a handful of pictures posted to the data center's Facebook page. But, based on the location, it's possible to infer two things:

1) Outside-air cooling will not be quite as easy as in Oregon, and
2) The power mix for North Carolina makes it likely that it will draw electricity from coal-fired plants. 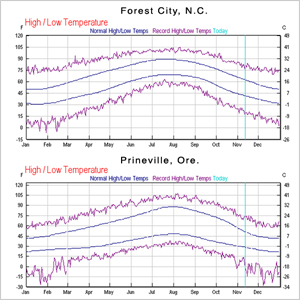 The seasonal weather averages for Forest City, N.C., and Prineville, Ore., at right (click image for full-sized), show warmer low temperatures and a slightly longer hot-weather curve in the summer. Although the winters in North Carolina are plenty cool, summers are much hotter than in Oregon -- "brutal," according to Cade Metz in The Register.

As to point number two: You may recall a little ongoing dustup between Facebook and Greenpeace over Facebook's use of coal-fired power to run its Prineville data center. Well, according to the federal Energy Information Administration, where Oregon is dominated by hydroelectric power and coal-fired electricity is largely imported, North Carolina is coal country, with about 60 percent of its energy coming from coal, about 30 percent coming from nuclear power.

The state is also among the top 10 for wind power, but speculation among the media is that Facebook will be using Duke Energy for its electric utility, and Duke has eight coal-fired power plants in the Carolinas. According to an article on Mediapost, Duke Energy "generates about 54.5% of its power from coal, 27% from nuclear, 12% from wind and hydro, and 6.5% from natural gas."

Conversely, Duke Energy is among the leaders in the utility industry when it comes to renewables and green commitments, with a number of notable projects in recent years, including a $100M investment in solar power back in 2008, a $600M commitment to electric vehicles in 2009, a LEED Platinum skyscraper in Charlotte, and a plan to build mini solar plants in North Carolina. The company was one of the first to abandon a "clean coal" group over climate change issues in 2009, as well. GreenBiz.com has not one but two profiles of CEO Jim Rogers in our archives.

Facebook has yet to comment on any green elements of the data center, other than its plans for LEED certification. But Greenpeace has already commented on the news, saying in a statement: "Greenpeace and over half a million Facebook users have asked Facebook to move away from their use of coal, but it appears that like it did with its data center in Prineville, Oregon, Facebook has chosen again a location that will increase demand for dirty energy." Greenpeace also reiterates its call to Facebook to adopt renewable energy for its data centers.

There will no doubt be more news and announcement from both sides as more details emerge about Facebook's new data center.