Where can you find a self-proclaimed DOUG (Dumb Old Utility Guy) from Kentucky hobnobbing with executives from the world's trendiest Internet companies to a backdrop of neon green signage and daylight-friendly house music?

At the famously lavish Silicon Valley headquarters of Facebook, which on Tuesday hosted its second-annual gathering on "[email protected]" — a wide-ranging conference that drew participants from Levi's, Walmart, Salesforce, Hewlett-Packard, IDEO, Microsoft and Blackrock, among others.

"What can we do, collectively, to engage in some of those global issues?" asked Facebook Director of Sustainability Bill Weihl. 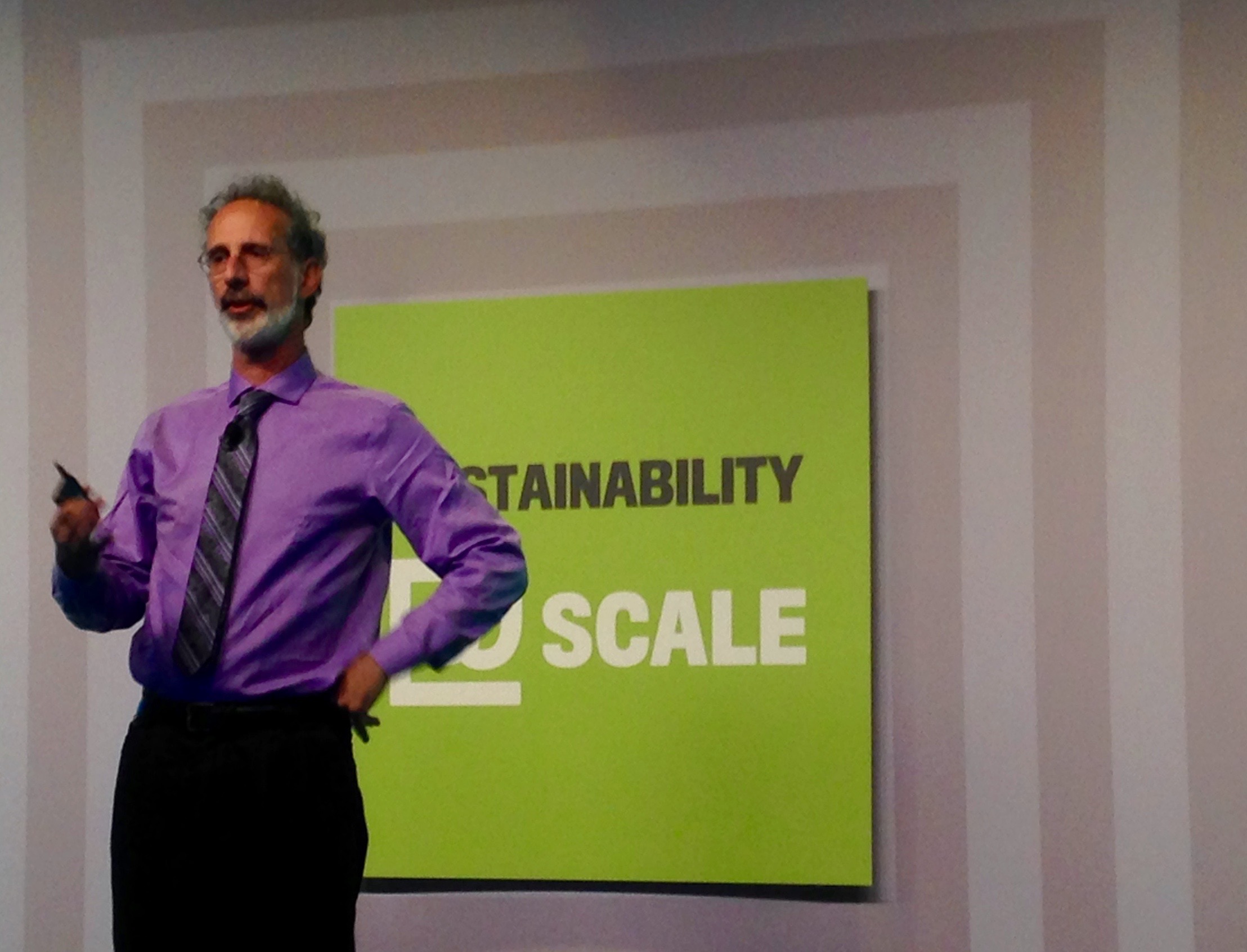 According to Pacific Institute Co-Founder and President Peter Gleick, who delivered a keynote talk on the economics of water and related sustainability issues, the root of that challenge lies largely in connecting the dots.

While plenty of companies in California are grappling with the intellectual concept of "peak water" or the immediate impacts of drought, he said, businesses and policymakers should also consider how sustainability issues are connected both economically and ecologically.

Pair those self-defeating dynamics with macro-trends toward rapid population and climate change-exacerbating emissions growth, and the picture gets murkier. That's especially true when factoring in lagging economic incentives to prioritize conservation of limited resources over short-term profit potential.

“When we use water for something, we’re producing economic value," Gleick said, naming tangible goods like cotton, semiconductors or food.  "There’s also an ecological value. We’re good at measuring one thing and bad at measuring another... We usually ignore the one we’re not good at."

Underscoring the event's emphasis on achieving sustainability at scale, he highlighted the need for systemic changes to water pricing and efficiency, but also the potential of technologies like desalination and waste water reuse.

“There are lots of new solutions that don’t require taking more water out of the ecosystem," Gleick said. "I don’t mean brown lawns and shorter showers. What I mean is long-term changes.”

For example, software or Internet technology companies that don't physically make much of anything are known in sustainability circles mostly for their efforts to green massive corporate data centers, ramp up efficiency and shift to renewable energy sources.

Both Facebook and Salesforce are among the tech companies that have committed to 100 percent renewable energy, experimenting with a growing array of options to purchase clean power. 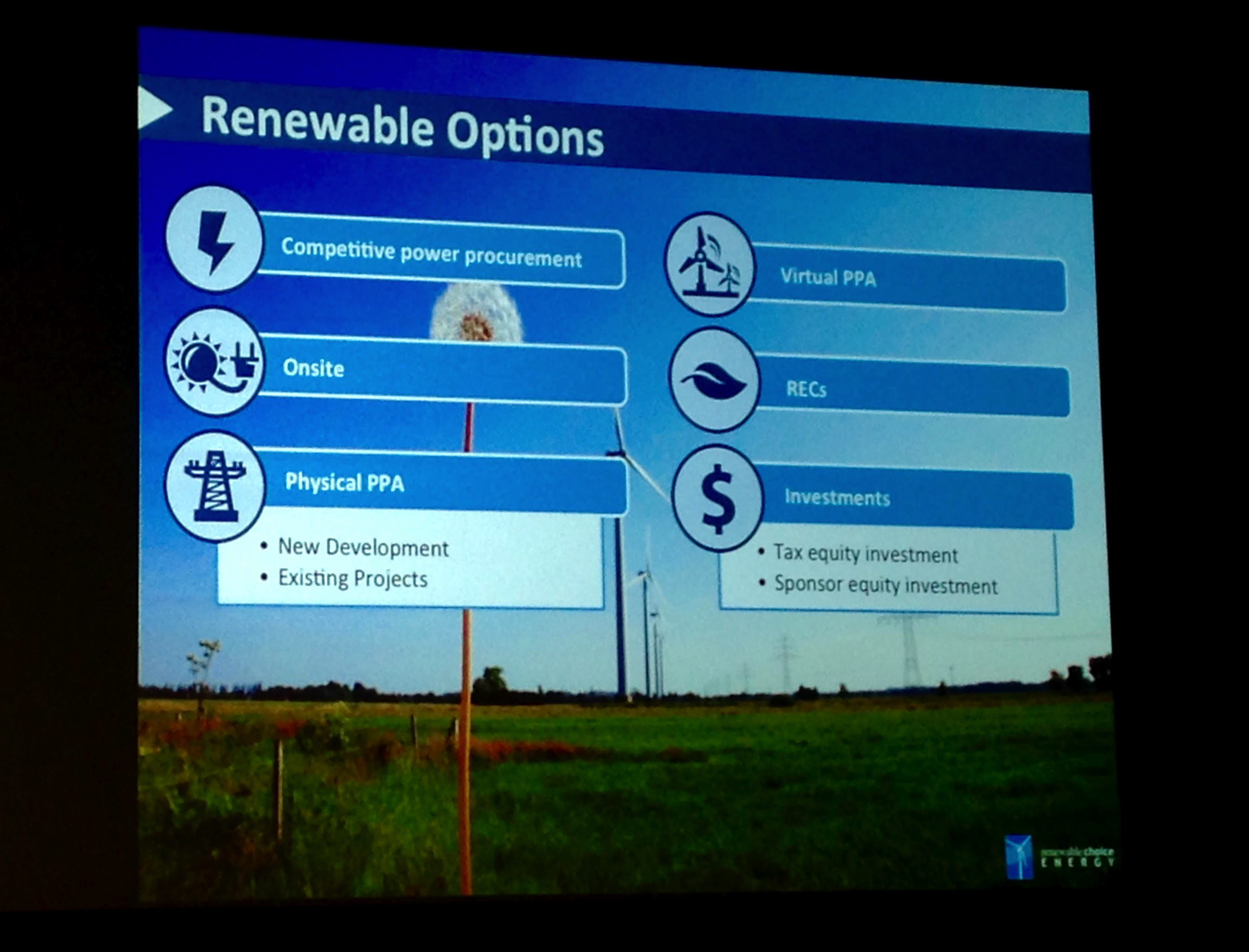 Walmart, which counts 11,000 stores in 27 countries, is an example of a large player in another sector aiming to produce or procure 7 billion killowatt-hours of renewable energy by 2020 as part of an overall objective to reach 100 percent clean energy.

The company is looking to a mix of on-site renewables, distributed generation and new efficiency gains to make the move cost effective.

"By having 10 year purchase agreements… we know what our energy bills will be," said Katherine Jennrich, Walmart's senior manager of energy services.

The cooperative with upwards of 535,000 members has worked to beef up renewable energy offerings — including controversial waste-to-energy power sources like landfill gas (an unpopular choice with activists like the Sierra Group).

That gamut of options illustrates the need for companies to define what renewable energy really means.

“Does a REC count for that? Does it have to be new renewables?" said Erin Decker, senior sustainability manager for Salesforce. "It’s a really important conversation to have internally, but know that it’s going to change over time."

When it comes to the bigger picture for manufacturers in sectors ranging from electronic devices to consumer apparel, ensuring sustainability farther down the supply chain gets much more complex.

In fact, even large suppliers like business-to-business supplier Flextronics, which had 85 factories and 14,000 vendors contributing to $26 billion in total revenue last year, struggle to even get a handle on key issues.

A recent emphasis on addressing third party reports of rampant forced labor in South Asian labor markets like Malaysia, for instance, revealed a much deeper lack of insight into global operations. “The lesson it drove home to us was we really did not understand those issues, because we were not communicating effectively with our workers," said Bruce Klafter, vice president of corporate social & environmental responsibility at Flextronics.

Particularly in underdeveloped regions vulnerable to intermediary recruiters that may lure migrant workers into debt in exchange for the promise of employment, smartphone-based worker survey technology is gaining traction to provide additional information on the scope of the issues at hand.

Heather Franzese, executive director of the nonprofit Good World Solutions, oversees a product called Labor Link that promises to collect information on working conditions on a daily basis. That could be just the beginning, as Labor Link and competitors like LaborVoices seek new ways to tap into "people that were previously invisible," she said.

"We’re looking at how we can potentially collect data from wearables worn by workers," Franzese said — a nascent field, but one which would likely raise major questions about worker data privacy.

She added that the business case for such technologies often lies in reduced employment and training costs.

"If you have 15 percent turnover every month, you have huge costs," Franzese explained.

In the apparel sector, which was recently the subject of a new documentary exposing systemic shortcomings in supply chain standards, Levi Strauss is one company that has worked for years to push the sector in a positive direction by incentivizing better behavior.

In addition to forging new 2020 goals designed to curb toxins in the supply chain, the company has started surveying workers at five of its vendors to determine their most desired employment benefits.

With results indicating that health care, financial services and education for employee children are top of mind, Levi's is working with groups including the World Bank's International Finance Corporation to offer "actual money in your pocket incentive(s)," like more favorable lending terms.

Still, companies slow to voluntarily address supply chain sustainability pitfalls in other areas, like conflict minerals, have instead found themselves trying to catch up with new reporting and transparency requirements.

“Given these positive models… the question we have to ask ourselves is why is it still a relative handful of companies that are doing this?" Dan Viederman, CEO of labor advocacy nonprofit Verité, said of voluntary supply chain sustainability efforts. "When companies don’t act on their own, regulations get involved."

In a provocatively-framed debate on "Thinking Outside the (check) Box," panelists squared off on the matter of whether “today’s sustainability reporting model is bloated, burdensome and broken."

Michelle Edkins, managing director for asset management giant Blackrock, criticized the irrelevance and lack of standardization that characterizes many sustainability reports from an investor's perspective.

"What is it that you are doing so well as a company that you have a long-term future, and that our customers’ money is in good hands?" Edkins asked, adding that, "The quality of data is abysmal."

Still, proponents contend that current models do allow individual companies to benchmark themselves in an effective way.

“It’s tremendously flexible," said Steve Lippman, director of corporate citizenship for Microsoft. "You can look at all of this guidance that people are providing to you for free."

Indeed, there is an array of reporting standard-setters currently active in different industries, like the Global Reporting Initiative (GRI), Sustainability Accounting Standards Board (SASB) and International Integrated Reporting Committee (IIRC).

But broader challenges have also become embedded in the field of sustainability, like the push only relatively recently to set corporate environmental goals based on concrete science, and the lack of legally-binding commitments to follow through on those voluntary targets.

In many cases, Edkins contended that activists groups still wield the most power to compel change in corporate behavior, despite insistence that reporting in and of itself improves accountability.

"There’s a huge gap in the information," Edkins said. "The model doesn’t work if you need social shaming to make companies report stuff."

“It’s a lot of work. It takes, usually, a corporate team about six months," Teear said, noting that 75 percent of companies on the S&P500 completed a sustainability report of some kind last year. "It’s a big investment, so there has to be a reason to do it."

On that point, Edkins agreed.

“We have the technology to make these reports a hell of a lot more accessible," she said. "You do have to make it a usable tool."