Tule Technologies, Rubicon Water and other ag-tech companies as well as university and government researchers have devised tools to grow more food with less water.

This article, written and co-published with Civil Eats, originally appeared on Ensia.

From reading the weather to choosing a crop, farming always has been a hands-on enterprise. When a farmer wonders how much water a crop needs, a simple test always has sufficed: Grab a handful of soil and feel how it clumps together.

Now something else is helping inform the farmer’s touch: Data. Sensors, satellites and software are adding piles of new data to help manage water on the farm. From soil moisture to leaf transpiration, pump speed to valve status, a farm field these days can seem as wired as an airport.

Water scarcity is adding urgency to the quest for this kind of information. Droughts seemingly have become more common and persistent across the globe, presenting farmers with tough choices and slimmer economic margins. In the face of uncertainty, technology offers one way to exert more control over basic inputs such as water.

In the Texas panhandle, the recent prolonged drought forced many farmers to realize they no longer can depend on rain alone to irrigate crops. Many are drilling deep wells to tap into the Ogallala Aquifer, the largest in North America, for supplementary irrigation water.

“Irrigation is important to people here — not only farmers, but the whole economy,” said Susan O’Shaughnessy, a research agricultural engineer at the U.S. Department of Agriculture in Bushland, Texas.

“We know it’ll run out someday. We can’t stop that,” she said. “Irrigation is important to people here — not only farmers, but the whole economy. We’re looking to sustain farmers for a few years to come.”

Improved irrigation efficiency also can reduce diversions from creeks and rivers, leaving more water for aquatic habitat and other human uses. And it may prevent herbicides and fertilizers from being carried back into those rivers when water runs off fields.

Only about 20 percent of global farmland is irrigated, but that irrigated land accounts for 40 percent of food production. Flood irrigation is the most commonly used method, even though crops use only about half of the water applied by this method.

Many people recognize a center-pivot sprinkler because it creates “crop circles” visible from the air. A giant sprinkler on wheels rotates around a central water supply (a well or supply pipe), watering a circular field. It is the most common irrigation technique in the Texas panhandle and many other parts of the United States.

And it is becoming increasingly popular around the world because it is simpler and more durable than many other irrigation technologies. It also can be efficient, with up to 90 percent of applied water being absorbed by the crop in automated center-pivot systems. The remaining 10 percent is either lost to the wind or runs off the field. 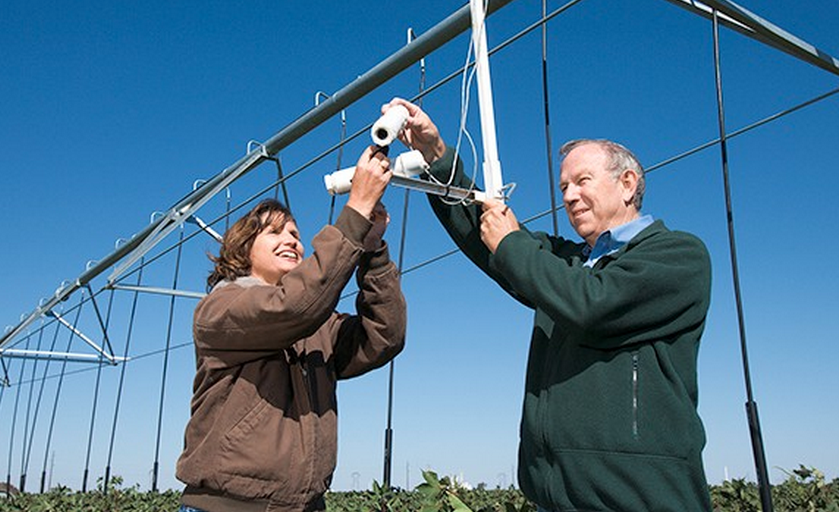 O’Shaughnessy is helping make center-pivot systems even more efficient by developing infrared sensors. Shown being adjusted by O’Shaughnessy and colleague Nolan Clark in the photo, these hang from the center-pivot arm to measure temperature in the leaf canopy of the crop below and provide data farmers can use to apply water only when and where needed. Such data are a better indicator of plant health than traditional soil-moisture readings, she said, which are commonly used to determine irrigation settings.

In O’Shaughnessy’s system, an onsite computer — the brains of the $3,000 system — processes data from the infrared sensors along with weather information. The computer compares these data against stress thresholds for that particular crop to determine how much to irrigate. Different zones within the circle may have unique thresholds based on soil type, drainage characteristics and other factors, and will get different amounts of water.

“At midnight, it takes this data … and spatially calculates the crop water stress for each management zone,” O’Shaughnessy said. “So if that is exceeded, it signals to the system that an irrigation is needed in that zone.”

The system produces a map of the circle for the farmer to show which areas need water. It also creates a new irrigation schedule to provide the water each zone needs. The farmer either can allow it to go ahead, or change it if — in his own judgment — other factors need considering.

On most irrigated farm fields around the world, water arrives by some form of surface irrigation, usually by flooding water into open ditches fed by a river or pumped from the ground. It then gets to plants the way it has for millennia — via flooded furrows. This is the oldest and simplest form of crop irrigation.

Drip irrigation is an increasingly popular way to improve irrigation efficiency over this traditional approach. This technology disperses water in small, flexible water lines, either above or below ground. In most cases, an “emitter,” or opening positioned at each plant, releases water at a measured rate based on the plant’s need.

Many farms are converting to drip because it allows precise application of water, as well as application of fertilizers that are delivered with the water directly to the root zone. But to make it work, the water first must be pressurized in the field, and that requires ponds, pumps, filters and pressure regulators — which require investing in a power source and regular maintenance.

The basic principle involves flooding fields at a faster rate and with more limited quantities of water than that used by traditional methods. It seems counterintuitive, but it works because the speed and precision provided by soil-moisture sensors and automated canal gates means the water doesn’t have an opportunity to run off the field or soak deep into the ground where the crops can’t use it.

The canal automation saved 32,000 acre-feet of water per year from being diverted for crops, which was then used to improve habitat in the Murray River. In a government-funded program in the Murray River watershed north of Melbourne, canal gates were automated to reduce water loss across the Shepparton Irrigation Area from 30 percent to 10 percent.

The region is considered one of Australia’s most productive, growing a wide variety of crops including grains, oil seeds, apples, pears and many other fruits. The canal automation saved 32,000 acre-feet of water per year from being diverted for crops, which was then used to improve habitat in the Murray River.

A study completed in March by Australia’s Grains Research and Development Corporation found such tight control of surface irrigation reduced water losses below the root zone by more than 50 percent. It also reduced nitrogen losses and improved nitrogen uptake by plants. Farmers note that the technology saves time as well, because they no longer have to race through their fields to close and open canal gates by hand at just the right time.

Another new technology being used in California, primarily with drip irrigation, measures actual evapotranspiration — the movement of water from soil through plants to the atmosphere — on an entire farm field. Sensors long have been available to measure evapotranspiration for a single plant or a single point in a field, providing data farmers can use to estimate water use on a whole field. But that approach is imprecise.

The new approach, “surface renewal,” measures the energy of wind eddies that contact plants. As wind moves across a field, water vapor moves from plants into the air. A sensor measures change in the wind’s energy, which is then used to calculate the amount of water vapor transfer over the area the wind has traveled.

The farmer uses this information to gauge the amount of water absorbed by the crop. It can be compared against a predetermined stress level in the plant to decide how much water to apply for the best yield — or, in the case of wine grapes, the best balance of acids in the grapes to get the desired flavor.

Developed by researchers at the University of California at Davis, the system is being deployed commercially by Tule Technologies, a company formed with university support.

“In the same field and in the same season, we sometimes help with water savings, yield and quality,” said Tom Shapland, CEO of Tule Technologies.

The company installs its sensors, which can cover as much as 10 acres, for $1,500 each, and provides a growing-season-long data subscription. The system is being used with wine grapes, almonds, walnuts, citrus, pistachio, melons, strawberries, tomatoes and other crops.

Shapland said the goal is to both improve crop yield and save water.

“Tule is an efficiency technology,” said Shapland, who developed the system while a Ph.D. candidate. “If a grower happens to start applying too much water, we tell them the plants are not using all the applied water. In the same field and in the same season, we sometimes help with water savings, yield and quality.”

Howes cites the example of data provided by soil moisture sensors buried 2 to 3 feet down at strategic intervals in a field. The sensors have become common across the U.S. for many types of crops to help farmers decide how much water a field needs and when.

But the large volume of data they spit out can be overwhelming. Howes says that time management studies have shown farmers have as little as 5 percent of each day to make irrigation decisions. The rest of the day is packed with choices about labor management, tractor work, pest control, fertilizer application and purchasing raw materials — not to mention selling the crop.

“A lot of farmers have gotten bogged down and basically abandoned that [soil moisture] system, because … they just don’t have time to actually look at it every day and decipher the data,” Howes said.

The next step, Howes said, is to equip a drone with a thermal-imaging camera. In partnership with colleagues at NASA and the U.S. Geological Survey, Howes is working to turn remote-sensing data from satellite imagery into measures of evapotranspiration on farms. The team is producing satellite photos with 30-meter resolution showing water use by crops in varying color codes. The photos show farmers at a glance which area of a crop needs more or less water.

Because of processing time, those images may be weeks old once they reach the farmer. The next step, Howes said, is to equip a drone with a thermal-imaging camera to produce the same kind of maps faster and in finer detail. Although drones have been getting lots of attention as commercial tools, it remains to be seen if the promises will bear fruit.

“A big part of the business is to make sure you’re not overspending on technology,” said John Diener, a farmer in California’s San Joaquin Valley, who has helped Howes and colleagues with the satellite mapping. “We are conserving every drop of water that we can. It’s not in our financial interest to do anything but that.”

There have never been so many ways to help conserve water on farms. The key question is, will farmers embrace them, given the trade-offs? Just like the trajectory of future water supply and demand, that remains to be seen.