The Federal Reserve’s new signals on climate change and risk

While the Trump administration continues to ignore the danger of climate change, a surprising new actor has broken out to take it seriously: the Federal Reserve System.

The Fed, the U.S. central bank, has moved from irregular mentions to a concerted effort to roll out a spate of new ideas and endeavors that highlight the risks of climate change to our financial system. As part of this effort, in recent weeks the Fed has:

Quite an awesome two weeks, in my opinion.

Some argue that the Fed is the single most influential actor in the economy, and so when the Fed moves — or even just talks about moving — people notice and the stock markets react. So much so that people used to try to guess what the Fed would do by the size of the Fed chairman’s briefcase: Was it thick or thin?

Momentum for the public comments on climate change made in recent weeks have been building for the past year. Last November, for instance, the Fed’s San Francisco District Bank hosted the first Fed Climate Change conference. At this conference, Fed Governor Lael Brainard made a very clear case for the Fed to include climate considerations in meeting its mandate in her closing remarks:

To fulfill our core responsibilities, it will be important for the Federal Reserve to study the implications of climate change for the economy and the financial system and to adapt our work accordingly. Congress has assigned the Federal Reserve specific responsibilities in monetary policy, financial stability, financial regulation and supervision, community and consumer affairs, and payments. Climate risks may touch each of these.

Even the Chairman of the Board of Governors, Jerome Powell — a Trump appointee — hinted at the importance of climate risks to the financial system at a press conference in January.

Then, on Nov. 5, Powell said that the Federal Reserve is already working to include more climate considerations in its work:

The public will expect and has every right to expect that we — that in our oversight of the financial system, we will account for all material risks and try to protect the economy and the public from those risks. Climate change is one of those risks… And we are, you know, very actively in the early stages of this, getting up to speed, working with our central bank colleagues and other colleagues around the world to try to think about how this can be part of our framework. And we're watching what other countries are doing.

On a recent Monday, the Fed took an even more concrete step. For the first time, it included climate risk in the bi-annual Financial Stability Report. Brainard added a statement to the page where the report is published. She used most of the space to continue to make the case for climate consideration: "It is vitally important to move from the recognition that climate change poses significant financial stability risks to the stage where the quantitative implications of those risks are appropriately assessed and addressed."

I read this as we need to stop just talking about climate change as some vague threat (because it’s a very real and growing danger) and start including those risks in decision making. What would this mean? For example, rules that would influence what interest rate an investment in a fossil fuel company or a beachfront development gets. Those decisions often can decide if a project moves forward or is abandoned as unprofitable.

As the Fed officials were talking more about climate change, one public step was missing: joining the Network for Greening the Financial System (NGFS). This group includes all major central banks around the world, save for the U.S. Its members work to understand and manage climate risk, and help make their economies more sustainable.

Imagine my joy when, capping off the eventful week, one of Donald Trump’s appointed Federal Reserve Board Members, Fed Vice Chair for Supervision Randal Quarles, asked by the Senate Banking Committee about NGFS, responded: "We have requested membership. I expect that it will be granted."

Up until now, the largest, most influential central bank in the world has not been a public part of the important conversations that central banks are having regarding climate risk. Now that is changing.

This is especially important because the financial system the central banks oversee directs the resources that can help or hurt people or planet. To the non-Fed enthusiast, these actions may seem like tiny steps. Geeks such as me who focus on its work know that the Fed has taken a huge first step in acknowledging opportunities and risks. Now it’s up to the Fed to do something about them. 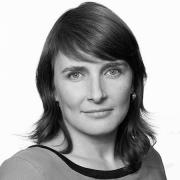 See all by Sarah Dougherty