<p>A new report by oekom research finds that while sustainable investment is growing globally, few companies are adequately prepared to measure and improve their sustainability performance.</p>

In its third annual Corporate Responsibility Review, oekom research, the German sustainable investment rating agency, analyzes the corporate social responsibility (CSR) performance of approximately 3,100 companies from more than 45 industries in over 50 countries. Overall, the results of oekom's analysis are not particularly heartening; according to the firm, "Only one in six companies currently satisfies the environmental and social requirements laid down by oekom research as prerequisites for oekom Prime Status." 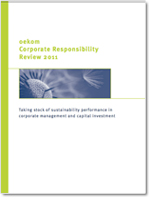 To arrive at its rankings, oekom employed what it terms "absolute best-in-class" criteria, by which the sustainability performance of companies is not only compared to its industry peers; companies must also "meet absolute requirements in terms of sustainability performance," according to the report. Absolute criteria, oekom contends, helps guard against the erroneous inclusion of companies like BP -- ;whose long history of health and safety violations culminated in last year's Gulf of Mexico oil spill disaster -- ;among top sustainable companies.

Furthermore, citing the 2010 European SRI Study published late last year by Eurosif, oekom pointed out that more than one-third of sustainable investments in Europe continue to use such exclusionary criteria as controversial industry sectors and significant violations of recognized labor and human rights standards.

Not surprisingly, oekom observed that companies in sustainability sectors are more likely to receive a positive rating, "as their products and services make a major contribution to sustainable development." The ranking of companies listed on the MSCI World bears out the observation, as the top five finishers are all renewable energy companies. Of the top five, the US-based First Solar ranked fifth.

For the first time, oekom rated companies on the MSCI Emerging Markets index. Wipro, an IT company headquartered in India, ranked first in the emerging markets breakdown.

Overall, oekom found that only one-quarter of companies "have the basis for a sustainable management system." Furthermore, widespread violations by companies of social and economic standards persist. According to the report, half of the manufacturers in the electronics sectors have been involved in violations of employees' rights, often through their supply chains. An astounding 75 percent of consumer electronics manufacturers have had substantiated antitrust violations as well.

In addition, 40 percent of companies in the mining sector have been involved in human rights violations, the report states.

In the report, Robert Hassler, CEO of oekom, took issue with the much-cited "black swan" theory of the financial crisis, which, he wrote, contends "that the collapse of the property market and the resulting global financial and economic crisis were not foreseeable." Against this theory, Hassler offers the analysis of economist Nouriel Roubini, which argues, according to Hassler, that "anyone with a clear view uninfluenced by the pursuit of short-term profits and bonuses could have seen the crisis coming."

As the aforementioned studies of the performance of sustainable investment products during the financial crisis revealed, sustainable investors may well have been better positioned than others to anticipate the potential impacts of poor corporate governance practices. According to oekom, "The principal factor behind the strong growth in the market is increased engagement on the part of institutional investors." An indicator of such increased engagement can be found in the marked increase in the number of signatories to the United Nations' Principles for Responsible Investment (PRI), which now number nearly 900.

In response to the financial crisis, the report observes, many sustainable institutional investors reduced the proportion of equities in their portfolios and increased their investments in money market investments and bonds. As a result, the consideration of environmental, social, and corporate governance (ESG) factors in fixed-interest investments has grown considerably.

"At the same time," the report continues, "There has been a tangible increase in interest among sustainable investors in alternative investments, such as forestry and commodities." The report points out that the issue of investment in commodities actually requires a two-step evaluation by sustainable investors. Firstly, as with their other investments, they must assess the ESG performance of commodities, "determined here by the conditions under which the commodities are cultivated or extracted and processed," according to the report.

Secondly, the report continues, investors must assess the impact of such investments on the volatility of commodity prices. According to oekom, "Speculative commodity investments which give rise to or exacerbate negative social and environmental impacts do not constitute sustainable investments."

An example of concerns raised in response to proposed investments in commodities occurred in the US in 2010, when the California State Teachers Retirement System (CalSTRS) announced a plan to invest $2.5 billion in commodities markets. In response, a coalition of investors led by the Interfaith Center on Corporate Responsibility (ICCR) expressed the concern that speculation in global food markets could lead to sharply higher food prices and famine in some regions.

As a result of the ICCR initiative, CalSTRS agreed to scale back its commodities investments to a $150 million pilot program, which it will monitor for social impacts.

Qualitative improvements must also include an increased influence on corporate behavior, oekom concluded. "Only in this way," the report states, "Can one of the key concerns of sustainable investment be achieved -- getting companies to change course toward sustainable management."

This article originally appeared on SocialFunds.com, and is reprinted with permission.

Photo CC-licensed by A. Strakey.