Fight or switch? How the low-carbon transition is disrupting fossil fuel politics

As the Trump administration works to weaken regulations on fossil fuel production and use, a larger struggle is playing out across multiple industries. Until recently, oil companies and their defenders generally reacted to calls for regulating carbon emissions by spreading doubt and promoting climate denialism. However, I believe this approach is becoming less effective as climate change effects worsen and public demands for action intensify worldwide.

As a scholar who focuses on the politics of energy and the environment, I see growing anxiety among corporate elites. Some fossil fuel defenders are embracing a new strategy that I call climate defiance. With a transition to a low-carbon economy looming, they are accelerating investments in fossil fuel extraction while pressuring governments to delay climate action.

Climate defiance is leading to some surprising clashes between the Trump administration, bent on extreme deregulation and extraction, and many other companies who recognize that the fossil fuel economy is unsustainable, even if they have not embarked upon a green transition. Climate change is sparking this self-reflection, which is writing a new chapter in global warming politics. 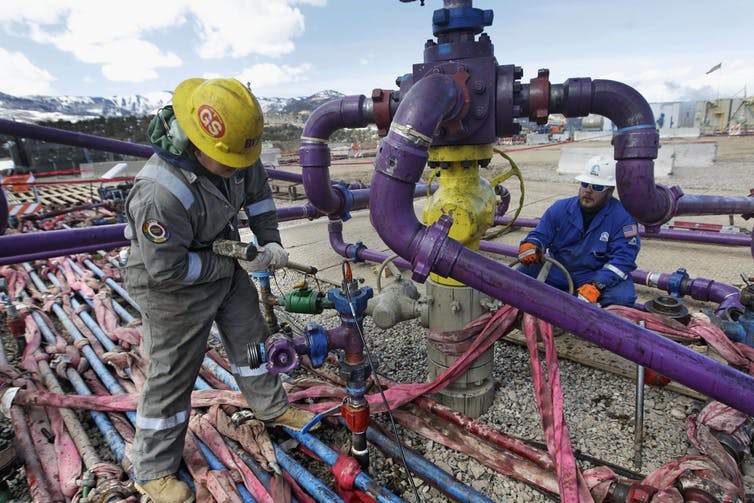 Workers tend to a well head during a hydraulic fracturing operation outside Rifle, in western Colorado, March 29, 2013. AP Photo/Brennan Linsley

But when it became clear that the Trump administration planned to go further than simply weakening the standards, and to freeze them altogether in 2020, some automakers balked. California and more than a dozen other states insisted on the right to keep higher standards, and four major automakers — Ford, Honda, Volkswagen and BMW — joined them.

Those companies, who represent about 30 percent of the U.S. market, have agreed to adhere to stricter emissions standards similar to the Obama plan, citing the need for more regulatory certainty. In retaliation, the Justice Department recently opened an antitrust investigation into the pact.

Methane — the main component of natural gas — is a greenhouse gas that contributes significantly to global warming.

Several major oil companies, including BP and Royal Dutch Shell, oppose Trump’s plan to further deregulate methane. Why? They have invested heavily in natural gas as a way to extend their fossil fuel business, and methane leaks pose a serious threat to the notion that natural gas should play a prominent role in a green transition, especially as renewable energy costs continue to decline.

In contrast, the American Petroleum Institute and smaller oil and gas companies support the rollback, claiming that methane control is too expensive.

Beyond these specific controversies, many companies in the energy sector and beyond have voiced support for moving to a lower-carbon economy.

For example, in August the Business Roundtable, a corporate advocacy group comprised of almost 200 CEOs from major American corporations, declared that corporate responsibility meant more than just serving shareholders. Instead they adopted a broader definition that includes serving customers, employees, suppliers, communities and shareholders, and pledged to "protect the environment by embracing sustainable practices across our businesses."

Such declarations are easy to dismiss as corporate greenwashing. Corporate responses to climate change largely have touted market-based reforms such as pricing carbon emissions, which would not jeopardize ongoing fossil fuel extraction and profits.

Indeed, global fossil fuel and overall energy consumption are still rising. And while banks may highlight their support for renewable energy projects, they also have provided at least $1.9 trillion in fossil fuel financing since the 2016 Paris Agreement entered into force.

Corporate responses to climate change largely have touted market-based reforms, such as pricing carbon emissions, which would not jeopardize ongoing fossil fuel extraction and profits.

Meanwhile, recent climate change assessments warn that avoiding warming on a catastrophic scale will require "rapid and far-reaching transitions in energy, land, urban and infrastructure (including transport and buildings), and industrial systems." Many experts assert that change on this scale ultimately will require countries to stop burning fossil fuels altogether.

Others assert that investments in renewable energy alone will not stave off drastic warming. Historically, they argue, new renewable energy additions mostly have increased overall energy consumption, rather than displacing fossil fuels. From this perspective, phasing out fossil fuels will require political action.

Such a shift poses an existential threat to major oil companies. Big Oil touts its green projects, but renewable energy accounts for only 1 percent to 4 percent of its new investments (PDF). In the view of energy scholars Daniel Sperling and Lewis Fulton, Big Oil has "no clear road map" for a green transition.

In my view, struggles between the Trump administration and major corporations over environmental deregulation signal an awareness that the fossil fuel economy’s days are numbered. Although climate deniers occupy prominent positions in the White House, Congress and the Environmental Protection Agency today, recent polls show that two-thirds of Americans are worried about climate change and believe it will harm them.

As I argue in my recent book, our fossil fuel system was set up to put the world to work for the benefit of European and American powers. Its profits come from undervaluing the labor and resources that feed it, which I believe has led not only to climate change but to extreme global wealth inequality.

A green transition is therefore not only a technical project. As global interest in Green New Deals suggests, climate change calls fossil fuel capitalism itself into question.

I see corporations beginning to sense this challenge. Some companies, especially those built upon fossil fuels, will continue to resist moving toward a lower-carbon future. Others will promote market reforms rather than broader systemic changes. I believe, however, that the most forward-looking must begin to imagine how they will fit into a just and decarbonized economy.

Business leaders call out the climate action resisters among them