The fight over the future of carbon pricing has arrived

The Paris Climate accord and an uptick in clean energy are just two factors pushing carbon pricing into mainstream economic arguments.

Putting a price on carbon. It's not a particularly novel idea, but it's one that people in powerful positions are talking about again in the wake of the Paris climate talks and the annual meeting of the World Economic Forum in Davos.

There is reason to believe, however, that the political calculus around carbon pricing is changing — even if it's not on the global scale that advocates envisioned heading into the COP21 United Nations climate talks in December.

"You cannot impose a carbon price in some sort of top-down way by waving a magic international wand," Anthony Hobley, CEO of climate advocacy group Carbon Tracker, told GreenBiz in an interview during the Paris talks. "You need to develop that bottom-up and then link it."

Rather than relying on a long-shot global carbon edict, state and federal leaders in multiple jurisdictions are seizing on a confluence of drivers — national emissions goals set in Paris, more business backing for strong climate policies, the U.S. Clean Power Plan — to seek opportunities to expand existing carbon markets.

Add to that the ongoing oil price slump and the decline of coal production in developed countries, and the debate over carbon pricing also runs straight into warnings about the environmental and financial risks posed by "stranded assets" — namely, coal and oil reserves that an increasingly vocal group of advocates argues must go unburned to avoid climate catastrophe.

The big questions now: Who could be the first to implement new carbon pricing measures, and how will the politics play out?

China and Mexico, along with the states of New York and Oregon, are among the locales that climate advocates are watching the closest to forge new headway on carbon markets.

In the meantime, the stakes of inaction are getting higher. With many countries lacking a clear path to meeting emissions goals and clean energy technologies in need of expansion capital, global temperatures remain on track to blow past the 2 degrees Celsius threshold that scientists warn would mark a point of no return on climate change, increasing the risk of extreme weather and geopolitical turmoil that could undermine the global economy.

"We’re already in that low-carbon, technology-driven transition," Hobley said. "The big unknown is, ‘Will it happen quickly enough to keep us under 2 degrees?'"

So-called "carbon markets" function in one of two ways: a tax on carbon pollution; or a cap-and-trade system where credits can be purchased and traded to offset carbon emissions that exceed predetermined limits.

The idea is that at least some proceeds are then invested back into carbon reduction, be it solar farms, public transit-oriented development projects or a related cause. As some political pragmatists point out, the revenue generated by a carbon tax also potentially could be used as a bargaining chip to secure broader buy-in.

"In the absence of climate change policy, when carbon-intensive goods are purchased, neither producers nor consumers pay for the damages caused by climate change," the World Resources Institute notes in a new report (PDF) calling for more carbon pricing policies in the U.S. "Instead, these damages are borne by society at large."

While carbon pricing has been a crucible of environmental policy proposals for years, a growing number of businesses and economists for international bodies such as the World Bank and the U.N. contend that carbon pollution premiums are a viable way to make progress on emissions-reduction targets while also driving capital toward clean energy.

The catch: It's not just the lack of a price on carbon that perpetuates society's dependence on coal, oil and gas.

Fossil fuels are subsidized at a rate of $10 million per minute worldwide, adding up to more than $5 trillion last year alone, according to the International Monetary Fund. In the U.S., rental prices for federal lands are also set much lower for oil and gas developments than clean energy projects, a Renewable Energy World analysis of Bureau of Land Management data shows.

"Many fossil fuel projects are benefiting from a lower cost of capital — they are getting money far too cheaply," Hobley said. "There’s also what we call a fossil fuel risk premium that many in the financial markets are only just waking up to. The problem is this risk is not really fully understood, so it’s not being priced in."

The private sector is far from a monolithic entity — a characteristic that becomes exceedingly clear when delving into supporters and opponents of carbon pricing policies.

While American businesses are generally quieter on the issue than their counterparts in Europe, internal carbon pricing systems and public-private initiatives are pushing the concept beyond the fringes of the business world. Inconsistent corporate carbon disclosures and wide variation in carbon prices also show that much work remains to be done.

As of September, 435 businesses ranging from Exxon Mobil to Google to Campbell's Soup already had imposed an internal price on carbon — a 150 percent uptick from 2014, according to company-reported data analyzed by CDP (PDF). Those companies charged themselves anywhere from a few dollars per metric ton of carbon emissions to well over $100 per ton, with energy and industrial companies skewing higher.

By factoring in the "externalities" of carbon emissions (sustainability speak for the hidden costs of pollution) companies are attempting to proactively brace themselves for stricter carbon regulations. In the short term, they're also presented with a financial incentive to shrink their operational footprints.

"These corporations are realizing massive efficiency gains, because no department within that corporation wants to continue bearing the burden of this internal tax on the profit and loss statement year in and year out," said Sean Penrith, executive director of Oregon-based conservation finance nonprofit the Climate Trust. "They’re looking to improve it."

In an annual carbon market forecast published by the Climate Trust, Penrith notes that a quarter of global emissions already fall under some sort of carbon pricing regime, such as Europe's 10-year-old emissions trading system or California's cap-and-trade market.

The public-private Carbon Pricing Leadership Coalition, for instance, has marshaled (mostly European) companies such as Nestle, Philips, Unilever and Shell in public support of stronger climate policies. Before the Paris talks, a letter was sent by six oil companies (again, European) calling for a price on carbon.

Still, a recent report by professional services firm KPMG paints a chaotic picture of the state of carbon disclosure among corporations: 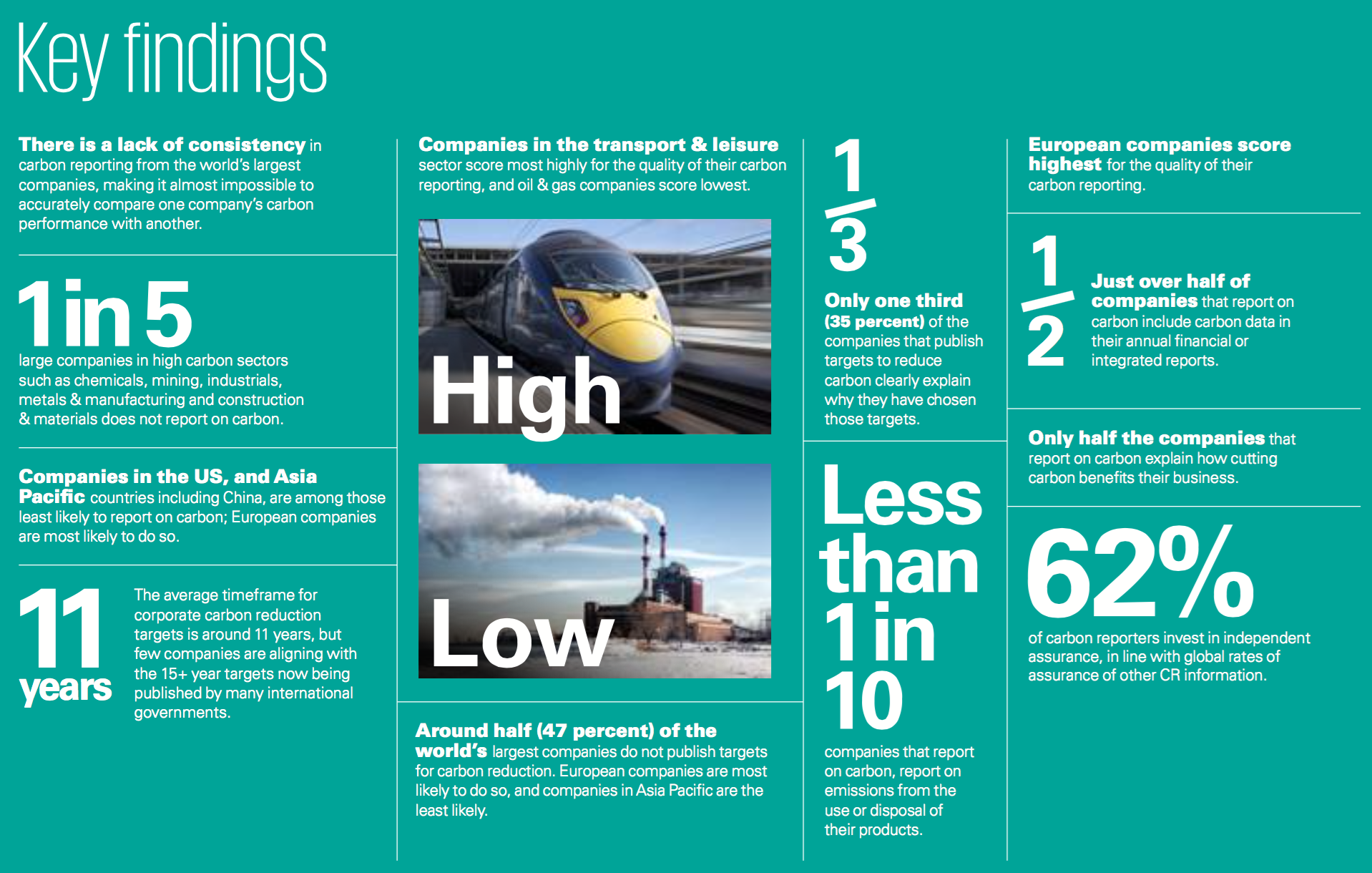 Even among companies that are reporting emissions data, KPMG notes that many don't explain how they calculated emissions goals or include information relevant to the issue in their annual financial or integrated reports.

"U.S. companies — with a few exceptions — are not speaking out," Tom Kerr, principal climate policy officer of IFC/World Bank Group, recently told the online publication Environmental Leader. "This is due in part to misconceptions about the effectiveness of carbon pricing in delivering a strong environmental and cost-effective outcome."

Beyond that, most companies with an internal carbon pricing system also don't take into account emissions generated by the actual use of their products. In this scenario, automakers, for instance, would count consumer fuel consumption as a carbon cost in addition to the emissions that result from manufacturing the vehicle.

In addition to the activity around carbon pricing in the corporate world, several significant policy shifts also are occurring, albeit largely under the radar.

For starters, a relatively obscure but important provision in the Paris Agreement calls for a mechanism to better link disparate carbon markets.

"Whether people like it or not, Obama has artfully crafted a pathway to multi-state cap and trade," Penrith said. "The time is ripe for another U.S. state to jump in."

New York Gov. Andrew Cuomo has floated his state as one that eventually may seek a market linkage with California, though the specifics of such an arrangement are far from clear.

The California Air Resources Board did not respond to questions about linkages to New York or other jurisdictions by the time of publication, but many places face similar obstacles to jumping on board with California. Much like regulatory fights over a higher minimum wage or any number of environmental and social matters, critics often contend that carbon pricing inevitably will alienate business tenants.

"There’s a big concern about leakage," Penrith said. "States are very concerned that, depending on the approach they take and who they link up with, will they create an impetus for businesses to move away?"

Depending on the approach [states] take and who they link up with, will they create an impetus for businesses to move away?

In addition to implementing the Paris Agreement and the Clean Power Plan with buy-in from businesses, the looming 2016 presidential election — anticipated to attract millions of dollars from individuals and companies associated with the fossil fuel industry — is another major concern for climate policy advocates.

On the flip side, a large-scale reordering of capital already underway could make a direct impact. Institutional investors with assets totaling more than $3 trillion have divested from fossil fuel portfolios, thanks to activist pressure and to anxiety about the long-term prospects for potentially unburnable carbon assets. That means cash is now up for grabs.

Making the case that there are viable investment opportunities in clean energy and sustainability for financiers outside of the impact investing community must be a priority, he added.

"It’s incumbent upon us to create a business value proposition," Penrith said. "If you have a command and control regulatory regime without a market, you can’t attract capital."