The fight over how to power the developing world

Clean energy advocates see a big opening to bring power to the world's estimated 2 billion people living in "energy poverty" or without electricity. But energy incumbents aren't likely to willingly give up potential customers.

In war-torn South Sudan, where 50 percent of the population lives in poverty and the average life expectancy is 55 years, reliable power has largely fallen by the wayside. When the World Bank last tallied the numbers in 2010, a paltry 1.5 percent of the country's then-population of around 10 million people had access to electricity.

In Cambodia, only 31 percent of the population has reliable power. In Haiti, it's 34 percent, and in ultra-modern Singapore, 72 percent of residents had electricity as of 2010, according to the World Bank.

These countries provide stark examples of global "energy poverty," or the lack of access to reliable modern energy, which impacts an estimated 2 billion people worldwide.

While the humanitarian toll of dependence on unhealthy electricity stand-ins like biomass and kerosene is often bleak in its own right, a lack of power and related infrastructure also stunts local government service delivery and business activity. 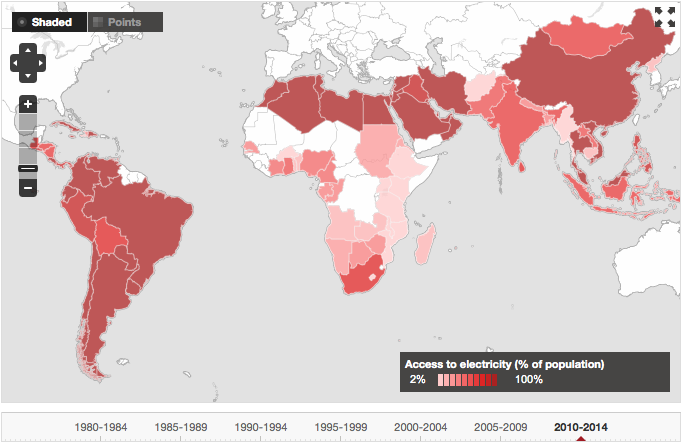 That reality — combined with the global proliferation of mobile technology and refinement of decentralized renewable energy — is now driving more clean energy providers and advocacy groups to wade into the world of delivering power to first-time customers, who in many cases lack the funds for a monthly energy bill.

"The cost and performance of solar, LEDs and batteries has enabled this shift," said Sam Goldman, founder of off-grid solar company d.light. "It used to be some junky battery, a jumble of wires and a panel that may or may not have worked. Now we’re delivering a good product with a brand and a warranty behind it."

Though companies like d.light have steadily grown their own market shares in recent years, the off-grid energy industry has been far from centralized in its own right. That is until now.

Power For All, a new coalition of off-grid renewable energy providers and advocacy groups like the Global Off-Grid Lighting Association, will formally launch on Thursday at the United Nations' Sustainable Energy For All event in New York.

The campaign — part industry cheerleader and part industry lobbyist — aims to unify the fragmented players in the de-centralized energy space to both grow the global market for off-grid renewables and ingratiate relevant technologies into global policy. That last part will be particularly important in the run-up to the UN Climate Conference slated for December in Paris.

Between now and then, Power For All hopes to grow the clout of distributed renewables in the conversation about relatively low-cost — and low-carbon — energy strategies, since groups like the International Energy Agency have forecasted a tab upwards of $756 billion (PDF) to achieve universal energy access through a mix of grid, microgrid and off-grid sources by 2030.

"This is a critical year for anyone who cares about energy anywhere," said Kristina Skierka, Power For All campaign director and president of clean energy advisory firm Katalytix. "We need to have a voice in the lead-up to Paris."

Going off the grid

Energy poverty is an issue with a global footprint, which also means that the potential market for cost-effective solutions is huge.

"Around 19 percent of the world’s population, or 1.3 billion people, have no access to electricity at all," according to ONE, an international advocacy group focused on poverty relief. "Lack of electricity in Africa remains one of the biggest barriers to the region’s development and prosperity, and continues to trap millions of people in extreme poverty."

While many under-developed and rural areas have waited decades for the electrical grid to reach their town, renewable energy providers are now eying the example of wireless phone carriers who skipped landline infrastructure to go straight to cell phones.

"If we’re going to build out the grid in Africa in all these countries, it’s going to take too long and cost too much money," Goldman said. 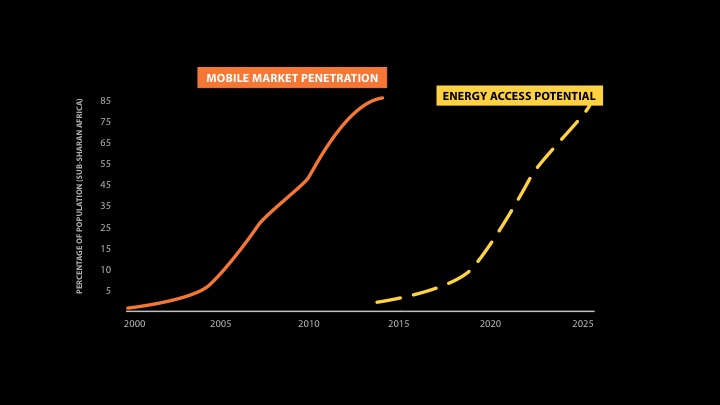 He points to the growth of his own nine-year-old company, which sells products ranging from an $8 solar study light to a complete in-home or small business solar power system with various financing options.

d.light has raised $40 million in funding from a mix of social and venture capital investors, recently hit 50 million customers and currently enjoys about 80 percent market share in the solar lantern market, Goldman said.

The field is also currently experiencing a wave of competition from new entrants, including Africa-based M-KOPA Solar and Off-Grid Electric, which combined raised $43 million last year.

"We are at the point where scale is being achieved," Skierka said.

Still, decentralized power has its limits, particularly with issues like solar energy storage far from figured out to generate large-scale electricity or ensure uninterrupted power. Reliability is tantamount.

"Nobody’s saying cities shouldn’t be run on the grid and that you don’t need a massive amount of power for industrial uses," Goldman said, though Skierka notes that off-grid renewables likely do have a role to play when it comes to urban resilience planning.

While acknowledging those limitations, the next frontier is competing in global business and policy arenas for expansion in suitable areas. And fossil fuel-based energy companies are not competitors to take lightly in that realm.

A new International Monetary Fund report released this week, for instance, pegged the level of total global subsidies enjoyed by coal, oil and gas companies at an astounding $10 million per minute.

"We are really outspent in terms of getting the kinds of dollars and attention that we need," Skierka said.

One way to level the playing field is to grow the visibility of off-grid renewables with policymakers.

For Instance, Skierka said that Power For All will aim to explicitly incorporate off-grid solutions into Intended Nationally Determined Contributions (INDCs) pledged by countries during COP 21 later this year in Paris.

“Including distributed renewables in energy policy is really critical," she said.

The Power For All campaign is far from a bid to elicit sympathy for relatively small off-grid renewable energy players competing with entrenched fossil fuel interests.

Rather, the goal is to position the industry — which proponents have taken to calling the more Democratic and socially-responsible-sounding "energy access industry" — as a viable alternative to fossil-fuel based power in (mostly rural) areas where no grid exists.

“We think there is a self-serve, better path to access," Skierka said.

She added that two keys for winning over investors and policymakers lies in "de-risking" the sector and "de-position[ing] business as usual approaches."

The groups behind Power For All have already worked with a producer of Al Gore's touchstone documentary on climate change, "An Inconvenient Truth," to help shape messaging.

Ironically, the effort comes as fossil fuel companies themselves are also getting wise to the potential value — both financial and reputational — that could accompany clean energy deployment in emerging markets. Some oil and gas companies are looking to distributed solar to help lower their on-site energy costs, while others are investing in products like clean cookstoves to serve a wider audience.

But off-grid renewable energy advocates are also working to improve the value proposition of their own offerings for would-be investors or other potential private sector partners, like manufacturers.

“What we’re really getting interested in is disruptive business models," Goldman said.

d.light — an outgrowth of Goldman's time in the Peace Corps, where he saw a child in Benin, Africa badly burned by an overturned kerosene lamp — has worked to expand its financing offerings to sell bigger solar power systems. A "D20 solar home system," for instance, includes a solar panel, mobile-charging battery pack, two solar lights, two light switches and a portable lantern. For its more complex offerings, the company has experimented with offering financing packages both in tandem with microfinance partners and through various pay-as-you-go models.

In addition to other kinds of debt and loan financing, Skierka said communities in Africa and India in particular have long experimented with community funds to purchase off-grid renewables.

While such arrangements will have to be carefully overseen in markets where people often earn only dollars per day, Goldman is encouraged by the self-sufficiency of the nascent market compared to bigger energy incumbents.

"They’re buying our products at market cost," Goldman said. "They’re not subsidized at all."