FIJI Water Sued Over Claim That Product is Carbon Negative

A Southern California woman has sued the FIJI Water Company in a class action complaint that alleges the firm's claim of having a carbon-negative product amounts to false and misleading advertising that sways consumers to buy the pricey bottled water.

The law firm Newport Trial Group filed the suit on December 20 in U.S. District Court in Santa Ana on behalf of Southern California resident Desiree Worthington, who is described as having purchased FIJI Water repeatedly in the past four years -- a period that roughly coincides with the start of FIJI's carbon-negative marketing campaign.

FIJI Water announced the campaign in November 2007 as part of a broader plan to make the bottling, packaging and transportation of the product more environmentally responsible. 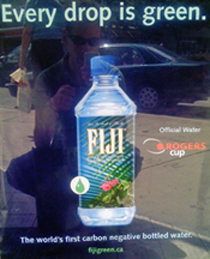 The initiative followed an onslaught of criticism of the bottled water industry. An article in Fast Company earlier that year noted:

"And in Fiji, a state-of-the-art factory spins out more than a million bottles a day of the hippest bottled water on the U.S. market today, while more than half the people in Fiji do not have safe, reliable drinking water. Which means it is easier for the typical American in Beverly Hills or Baltimore to get a drink of safe, pure, refreshing Fiji water than it is for most people in Fiji."

On its site, FIJI Water says:

"Since 2008, FIJI Water has been a carbon-negative brand. We are the first and only major bottled water company to make this commitment, under which we will continue to offset 120% of our emissions. That means that we are not only mitigating our environmental impact but also making up for a little bit of someone else's."

The method FIJI Water uses to calculate its offsets is at the heart of the recently filed suit.

The suit contends the carbon negative claim "induced countless consumers to pay a premium for bottled water" and cites comparative prices showing that FIJI Water costs about twice as much as other well-known brands of bottled water.  Worthington, the only named plaintiff in the lawsuit thus far, "would not have purchased FIJI water at a premium if she knew that Defendants' current operations did not remove more carbon from the atmosphere than they release into it."

FIJI Water, whose environmental practices continued to draw fire even before the lawsuit, did not respond to requests for comment, but describes its offset program on its site:

"To guarantee the quality and long-term benefits of our offset program, we have partnered with Conservation International (CI), a leading conservation organization, and invested in an extensive forest restoration project in Fiji. With the first 250 acres of new trees already planted and growing, the resulting 2,000-acre forest will deliver key global as well as regional benefits, including long-term carbon sequestration, preservation and restoration of natural wildlife habitats and biodiversity in the region, protection of critical watersheds, and income opportunities for hundreds in local Fijian communities."

The Newport Trial Group declined to comment on the suit.