As climate change risk rises, economies are adapting to curb its harmful effects. What cities are doing to mitigate these risks is coming into focus. Densely populated with people, buildings and transportation systems, urban areas demand higher quantities of energy and water. Because of this, reducing the environmental impact of these communities is fast becoming an international priority. After considerable progress in Europe, in the United States, technological innovation and regulatory developments are laying the groundwork for one possible solution: creating a smart city.

The smart city of the future occurs at the intersection of ongoing advancements in sustainable power generation, energy efficiency, non-polluting vehicles and changes in local and regional electricity grids — all combined for a more climate-friendly metropolis.

The environmental and social benefits anticipated as a result of overhauling urban energy production and consumption are substantial. Low-carbon transportation, for example, not only reduces day-to-day pollution —improving citizens’ health — it also can help to mitigate the detrimental effects of climate change in the longer term. What remains to be answered, however, is how smart cities will be funded and the impact disruptive technologies could have on the credit quality of the various entities likely to take part in backing this sweeping transition.

The financial undertaking involved in creating smart cities will be no small task. Whether undertaken by a public sponsor, a private entity or under a public-private partnership scheme, we expect that the projects to build out smart cities largely will be funded by debt. That said, debt financing and an accumulation of debt also could lead to weaker credit quality among corporate and public entities, and utilities if a large time lag emerges between the spending and the related benefits. Substantial capital spending also can affect operating efficiency, making the rated entity's cash flows more volatile as revenues become less predictable — a consequence, potentially, of jurisdictions with more regulatory uncertainty. 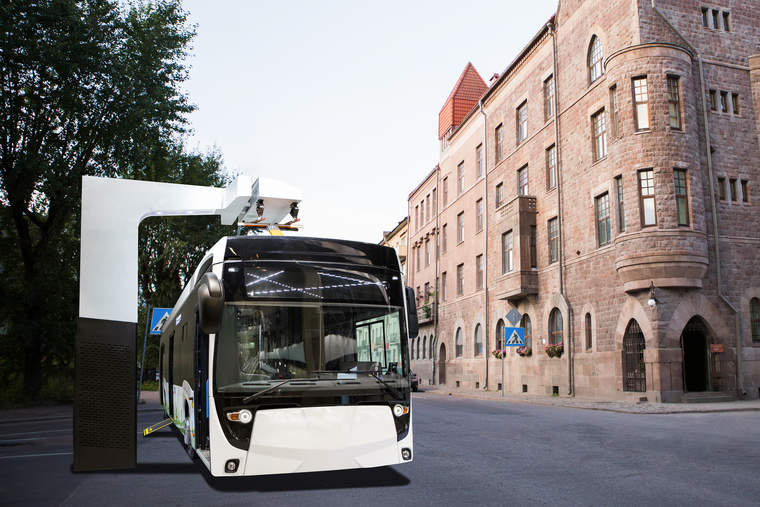 Shutterstock
An electric bus at a stop is charged by pantograph.
Some of this debt is likely to be raised in the form of green bonds. Municipal green bonds have been on the rise — with market estimates for 2018 suggesting that global issuance could top $15 billion of an estimated $200 billion of total labeled green bond issuance. Thus, funds will go toward various decarbonizing technologies such as renewable energy, electric vehicles, energy efficiency measures or battery storage.

Technological disruption and grid decentralization likely will have a significant yet disparate effect on a city, its inhabitants and its suppliers. While the potential benefits for consumers will vary, the impact could be much greater for some major players in the energy grid. For example, efforts to reduce carbon emissions could mean that utilities will face the prospect of more stranded assets spread across a smaller number of ratepayers and fewer megawatt hours.

The smart city of the future occurs at the intersection of advancements in sustainable power generation, energy efficiency, non-polluting vehicles and changes in electricity grids.

The ability to manage these risks can have a material impact on credit ratings for a variety of market players — including municipalities, corporations and utilities. In fact, S&P Global Ratings’ sustainable finance research found that between mid-2015 and mid-2017 environmental and climate (E&C) factors were important to 717 ratings. And for 106 of those, E&C risks were key to a rating action — that is, a ratings change, outlook revision or placement on CreditWatch. Environmental risks include those associated with the transition to a low-carbon economy — and so, going forward, this likely will increase as cities pursue integrated, cleaner city planning.

It is therefore important to take a broader look at how incumbent members of the energy system — mostly financed by corporate and project finance structures — will fare under new business models from a credit, business and environmental standpoint. For example, credit metrics could change directionally and at varying speeds, especially among different types of power producers. Environmental ambitions increasingly could play into decisions on energy production and usage.

Given the large-scale planning responsibilities that state and local governments and authorities will need to undertake in order to implement smart city plans and infrastructure, we are likely to see more municipal policies implemented that relate to these decisions. That may be especially true in jurisdictions that already have instituted some environmentally conscious policies and that are implementing their own carbon reduction regulations in lieu of a firm federal policy in the United States.

California, for example, recently mandated the installation of solar panels on new homes constructed post-2020, while other jurisdictions are favoring the use of electric or natural gas-fueled buses. Where 95 percent of the American bus fleet comprised high carbon diesel engines as recently as 1997, that figure has declined by nearly 50 percent in the past two decades. Indeed, alternative vehicles have fallen in price and policymakers — with the support of the Federal Transit Administration (FTA) — have boosted their use to cut greenhouse gas emissions.

Other action by state and local governments includes improving buildings’ energy efficiency, helping to reduce the carbon footprint of built-up areas. As a result of this commitment to energy efficiency and changes in the domestic economy, between 1972 and 2015 — and despite a soaring population — residential natural gas usage remained essentially flat. Progressive coastal cities in the United States are leading the early charge; San Francisco and Boston, for instance, have received strong feedback for greening their footprints early in the process, especially in the realm of energy efficiency. Moreover, during the latter part of the period to 2015, electricity usage also flattened. And if using less energy to produce the same output is one-half of reducing carbon emissions, the more obvious other half is creating power with less carbon to begin with.

Debt financing and an accumulation of debt could lead to weaker credit quality among if a large time lag emerges between the spending and the related benefits.

As such, one of the more promising avenues for greening city infrastructure is the greater proliferation of rooftop solar panels. At present, we estimate that only about 1 percent of nationwide rooftop solar potential is being realized. This figure seems slated to grow, however. The cost of solar panels continues to decline, having already dropped by over 50 percent during the past eight years, a trend that is likely to continue. Ultimately, we believe that state and municipal support of distributed renewable assets will be key to encouraging continued solar panel installation — following California’s lead.

Nothing is guaranteed, however. It is important to note that policy decisions can be all too easily reversed — as they depend upon the often changeable popularity of the policy or policymaker. Secular changes in economics can be more enduring. So we believe that the sophistication of these new cities — and the penetration of smart city technology — largely will occur at the confluence of policy and economics.

While policy seems to be requisite for getting smart cities off the ground, economics will provide the underlying longer-term benefits. The opportunities for cost and carbon savings are most pronounced in highly populated areas that can benefit from the efficiencies of distributed generation, reduced transmission building, electric vehicle penetration and more advanced heating tactics.

In some densely populated areas of the United States, for example, energy consumption per capita is already remarkably low, partly thanks to more public transit and less vehicular traffic. Green power also continues to advance. A key reason is that the economics of many components needed to make smart cities — both energy- and data-related — have become more favorable. The smart city transition isn’t only a good thing for the climate-conscious consumer or the policy maker considering reputational risk; it makes economic sense, too.

Smart cities thus present new prospects for America’s aging infrastructure — which, by 2020, may have fallen into such disrepair that it threatens to disrupt economic growth if not properly addressed. This challenge transcends partisanship, as Republicans and Democrats alike agree infrastructure overhaul is in order, even if the method for funding it differs. The infrastructure opportunities — and associated economic incentives —are convincing, notwithstanding the environmental impetus.

Ultimately, the financial and credit consequences of this new vision are still unknown. However, political commitment, combined with economic rationale and wide-reaching environmental benefits, could pave the way for smart cities to proliferate across the United States — working for a greener, more interconnected nation and, eventually, a more sustainable world.

How PACE Affects the Future Financing of Energy-Saving Projects

How can communities finance microgrids for public safety?