Finding the psychology of sustainability

An excerpt from “A New Psychology for Sustainability Leadership: The Hidden Power of Ecological Worldviews,” by Steve Schein. Published by Greenleaf Publishing, copyright 2015 by Steven Schein. Reprinted with permission.

As midsize mammals dependent on the Earth’s ecosystems for life, human beings face the most serious and complex set of ecological problems in our history. Driven by our ecologically unsustainable way of life and the dramatic increase in our global population, these problems include an increasingly less predictable climate and a wide range of interrelated social, environmental and economic problems.

Although multinational leaders have been immersed with scientific information describing the ecological crisis, overall it has not altered the short-term economic approach to business that is responsible for the serious problems we face. It appears that more information from the natural sciences is not enough. Perhaps the social sciences can make a vital contribution by reframing ecological issues, especially for sustainability leadership?

There are at least eight interrelated social science disciplines that can be applied for this purpose. These disciplines, which I characterize as ecological worldview traditions, are deep ecology, eco-psychology, environmental sociology, social psychology, ecological economics, indigenous studies, integral ecology and developmental psychology.

Although these schools of thought have existed for several decades as separate academic disciplines, there has not been enough exploration of how they can be integrated into the business curriculum to comprehend the broader implications of sustainability leadership. This is due in large part to the continued silo nature of our universities, with business schools still being separate from departments of environmental studies, psychology, philosophy, sociology, anthropology, communications and the humanities.

I draw on key concepts and themes from within these disciplines as part of the theoretical framework for my research about sustainability leaders. A partial list of scholars and themes from these traditions is provided in Table 3.1. A brief description of how each discipline has interpreted the worldview concept follows. 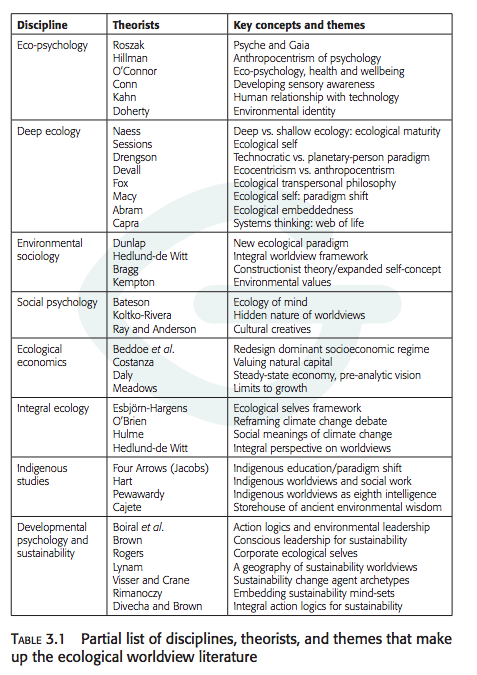 Through the lens of social psychology

As a foundation, let’s first explore the concept of worldview, what it means and why it holds so much potential for advancing sustainability leadership.

Michael Anthony Hart, social work professor at the University of Manitoba, observes that we continually use our worldviews to make sense of the social landscape and to find ways towards whatever goals we seek. In their seminal book, “The Cultural Creatives,” sociologist Paul H. Ray and psychologist Sherry Ruth Anderson situate worldviews in the context of values and culture in the United States. They characterize our worldview as comprised of everything we believe is real. This includes our understanding and interpretation of the economy, technology, the Earth, how we work and what we value.

Ray and Anderson observe that a change in worldview don’t happen often because it changes virtually everything in our consciousness. They describe this is as a sense of who we are and what we are willing to see, including our priorities for action developed throughout our lifetimes through socialization and social interaction. Hart observes further that our worldviews are encompassing and pervasive, yet they are unconsciously and uncritically taken for granted as the way things are.

Psychologist Mark Koltko-Rivera defines worldviews as a set of assumptions about physical and social reality that can have powerful effects on our cognition and our actions. He describes worldviews as our total outlook on life, society and its institutions. Highlighting the hidden nature of worldviews, Koltko-Rivera adds that explicit references to worldviews are often obscured in academic articles and in our conversations because they are called other things including values, paradigms and beliefs.

Through the lens of developmental psychology

Over the last four decades, researchers from the field of developmental psychology have periodically used the term “worldview” synonymously with “stages of development,” “action logics,” “orders of consciousness” and “ways of making meaning.” Temple University professor Willis Overton characterizes worldviews as narratives that ultimately evolve to become an overarching paradigm constellated by  a set of interwoven and coherent set of concepts.

Leadership consultant and human development researcher Barrett C. Brown puts the worldview concept into a sustainability context by explaining how developmental psychology can be used to map how worldviews change over time and become more complex as an individual’s span of care grows.

He observes that as human beings we have the potential to develop from caring for ourselves/family/group/nation to eventually caring for all human beings, and ultimately to all sentient life. In the context of sustainability leadership, Brown highlights the importance of effectively communicating to different worldviews. He explains that in order to enhance our effectiveness as sustainability leaders we need to be able to honor all worldviews as they are, even if they differ from our own. 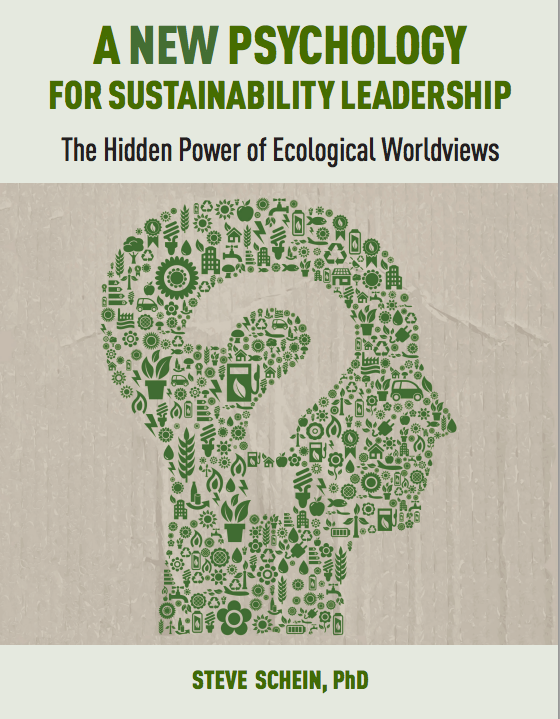 Through the lens of integral ecology

Integral ecologists Sean Esbjörn-Hargens and Michael Zimmerman put worldviews into a developmental and ecological context. They observe that within the environmental movement there are three large groups of worldviews known as traditional, modern and postmodern. They explore the implications of worldviews on politics, religion and culture from a developmental perspective and explain how environmental issues arise differently for people depending on their worldview. Esbjörn-Hargens and Zimmerman observe that this can prevent leaders from effectively communicating with each other and attribute the failure of solving the world’s major environmental problems at least partially as a failure to differentiate among worldviews. Now with an initial sense of how the concept of worldview has been described and how it may apply to sustainability leadership, we now focus more closely on the concept of ecological worldviews.

Ecological worldviews were described as early as the 13th century by St Francis of Assisi, who said that all humans were responsible for protecting nature as part of their faith in God. Ecological worldviews have been described in the 19th century through the transcendentalism of Ralph Waldo Emerson and Henry David Thoreau. In the early 20th century, they can be found in the writings of the mystic Thomas Merton and land conservationist Aldo Leopold. In the second half of the 20th century, philosopher Lynn White explored the larger spiritual implications of ecological worldviews by attributing their absence as a root cause for the ecological crisis.

Collaborator in Chief: How sustainability leaders are made

Are we missing the real message of the Pope's climate encyclical?

Overdue: The next Copernican mindset shift