The government is looking for at least a one-to-one matching investment from the private sector for the three-year project to increase the amount of biofuels used by the Navy, which has a goal of cutting oil consumption in half by 2025.

Advanced drop-in biofuels can be used with existing fuels in planes, ships and vehicles without retooling equipment or delivery systems. The Defense Department's other green initiatives are outlined here.

• VW Renewable Venture: Volkswagen is stepping up its interests in renewable energy with a commitment of 1 billion Euros (about USD $1.44 billion) for green power production in the next two years. The amount tops the 600 million Euro midterm commitment the company announced in June. Among other things, Germany's largest automaker may buy interests in at least two offshore windfarms, according to Reuter's take on an article from Financial Times Deutschland.

• UNIQLO Clothing Drive: Popular clothing retailer UNIQLO expands its 5-year-old All-Product Recycling Initiative to stores in the United States, United Kingdom and France starting September 1. The firm started the program as a way to recycle its clothing for industrial use but found that most of the apparel customers donated was still wearable. As of July, more than 11.5 million pieces of clothing with the store label had been collected for distribution through UN refugees aid and other disaster relief programs.

• Water-Saving Sweet Spot: The landscaping company for the Jelly Belly Candy Company is installing a high-tech water management system at the confectioner's headquarters that is expected to reduce water used for irrigation by 29 percent. ValleyCrest Landscape Maintenance is installing a Weather TRAK smart water system by HydroPoint. The candy company's 35-acre HQ, factory and visitors' center just off Interstate 80 in Fairfield, California, is a beacon for children and others with a sweet tooth.

• Rewriting School Texts on Plastic: Almost 25,000 people have signed an online petition to strike passages about the benefits of plastic shopping bags from California high school texts. The effort follows a news investigation that revealed the American Chemistry Council pushed California's education department, its school board and the state EPA to insert the favorable language in curriculum on the environment. 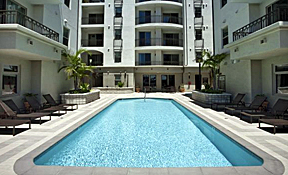 • It's Not Your Father's Dorm: I neglected to mention this LEED-Platinum lollapalooza in the last Green Building Roundup: the sleek, 161-unit student apartment building called West 27th Place that serves the University Southern California. The mixed-use development (that's it at the top the page and its swimming pool is pictured right) was certified at the U.S. Green Building Council's highest level.

The building saves water and energy, has an elevator that generates electricity and was constructed of materials that are kinder to the planet. The off-campus apartments for the private school blow away the drab cubby holes from the days before IKEA. Each has at least one private bath, a washer-dryer, free wifi and a "luxury kitchen." Fully furnished units have an entertainment center plus free cable. Rent runs from $773 a month for a 425-square-foot studio to $1,291 for a one-bedroom. A 4 BR-2BA  goes for the bargain rate of $680 per bed. The posh, now fully leased digs opened just before the start of the school year. After all, the school is the home of the Trojans, not the Spartans.