<p>Leaders of the startup say their Rapid Building Assessment Platform can add speed and volume to the often balky process of onsite energy audits.</p>

Imagine having the energy efficiency of your building assessed without an auditor ever setting foot in the place and getting the results -- along with customized recommendations on how your company can cut waste -- in a fraction of the standard turnaround time.

That vision of a "zero-touch" audit is what FirstFuel Software CEO Swapnil Shah and his colleagues are trying to deliver to the market with their Rapid Building Assessment Platform.

They announced Thursday that their startup landed $2.4 million in an initial round of financing led by Battery Ventures and Nth Power, which were joined by individual investors.

The money will be used to scale up the business and move it from pilots to broader distribution. The Massachusetts-based company has been conducting pilots with two of the largest utilities in the U.S. as well as government agencies and is looking to add a third utility to its list of pilot partners, said Shah.

The power of the system lies in its "ability to analyze the consumption patterns of a building remotely," said Shah, who gave me a rundown on how the platform works. Essentially, he said, it needs only two things from the customer -- the address of the building to be assessed and a year's worth of hourly electricity consumption data from the utility that serves the property.

The platform takes that information and applies hourly local weather data for the same year-long period and uses GIS mapping to capture building data about the structure. Then the platform's analytics take over to produce, in effect, a "CAT scan" of the building's energy performance, detecting pattern and anomalies. While that's happening, consumption areas -- such as heating, cooling, lighting, lighting, gas, ventilation, plugload and pumps -- are analyzed and compared to benchmarks that FirstFuel has developed for comparable buildings.

The result is a report that provides building owners with the big picture on their property's energy consumption and drill-down information on consumption in specific areas. Most important are the operational and retrofit recommendations that can increase efficiency and reduce costs. 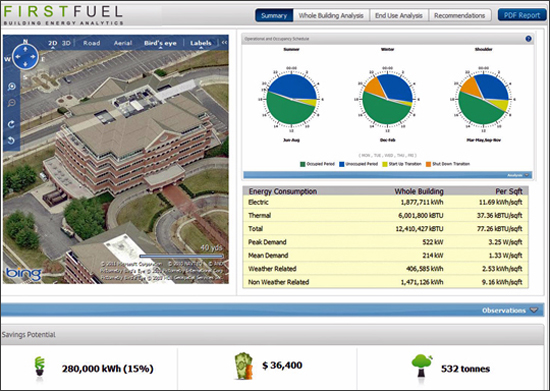 That all sounds great, I told Shah, but it also seems a bit too good be true. I asked whether the platform works in real-world applications.

"We can prove it and have independent studies that show it works," he said.

Lexington, Mass., put the platform to work on five of its largest buildings. The assessment was returned in less than a week. It recommended 13 operational measures that could save the town more than $90,000 per year on annual energy costs, which had been $1.6 million annually for the five buildings, according to a case study on FirstFuel's website. Projected over a five-year period, the savings would be $450,000.

"FirstFuel is helping us to save half a million dollars from our operating budget -- identifying savings where others didn't, and at a fraction of the time and expense, all without encumbering my staff with on-site audits," said Pat Goddard, Lexington's public facilities director, in the case study.

FirstFuel's technology is interesting in that takes analytic concepts used in energy modeling for new construction and retrofits and takes it further to create its business model. The company sees its initial market as utilities, especially those serving cities that will soon require commercial building owners to submit reports on energy audits and benchmarking for their properties.

As I've reported, San Francisco, Seattle, New York City and Washington state are among the jurisdictions with such regulations. As those requirements kick in, the demand for energy performance assessments will spike.

Shah said his company's technology can help handle that load by providing numerous reports in the time it takes to produce one from an on-site audit (the company wants to ramp up to conduct hundreds within a month). Typically, he said, it's a high-touch process involving at least one site visit and several contacts with building personnel that can take weeks. "This is zero-touch," he said.

Utilities in the U.S. spent about $6.6 billion year on programs and work aimed a energy efficiency and 40 percent of it went toward commercial and industrial buildings in 2010, according to the Consortium for Energy Efficiency. That amount is expected to soon double, so besides saving time, FirstFuel technology can "provide more savings for each dollar spent," Shah said.

Point taken on saving time and increasing the volume of assessments that can be delivered by any one source, but what about the jobs that would affected by the technology, I asked.