Five Walmart Stores to Collect 28 Types of Trash for TerraCycle

Five Walmart stores on the East Coast will be the first to test a new collection system for 28 types of trash that TerraCycle turns into new products.

The waste comes in from collection Brigades, schools that sign up to collect specific types of waste, and TerraCycle donates 2 cents per item collected to the school or charity of the Brigade's choice.

Brigades currently have to mail in trash they collect. The collection system at the five Walmart's, going into place Oct. 1, will allow anyone to drop off any waste that New Jersey-based TerraCycle accepts in converted 20-foot trailers (below) at Walmart stores in Secaucus, Vineland, Deptford East and Lanoka Harbor, all in New Jersey, and Tullytown, Penn.

Earlier this year, TerraCycle and Walmart worked together on a special Earth Month promotion. During April, all Walmart stores carried numerous TerraCycle products. Walmart still carries a line of coolers that TerraCycle and Olivet make out of chip bags. 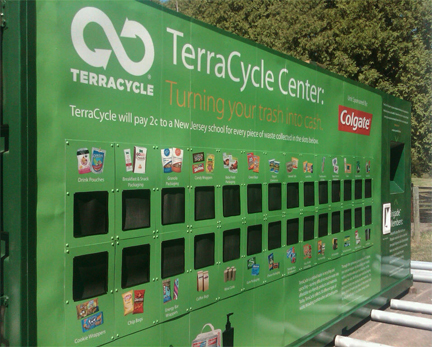 In addition to working together on the collection system, TerraCycle and Walmart teamed up on the new Trash for Cash Collection Contest, which will give five grants ranging from $10,000 to $50,000 to the New Jersey public schools that collect the most waste through TerraCycle collection Brigades until Dec. 15.

[Editor's Note: This article has been updated with addition information on TerraCycle's work with Walmart.]