Editor's note: In his April 7 column, "Can we flatten the curve on climate?" GreenBiz Group Executive Editor Joel Makower asked for readers' comments on his suggestion to borrow the concept of "flattening the curve" from the COVID-19 pandemic and apply it to climate change. This was among the many reader responses.

My first reaction to the comparison between the climate crisis and the pandemic: We cannot shelter in place for climate. Yet, symptoms are known. The physical repercussions of climate risk are very visible. So is the science. Regretfully, no vaccines nor tests would help in reversing climate change.

Restarting the communication clock on the urgency of climate action is an essential component of getting us to rein in the consequences. We have ample evidence — almost daily — of effective communications in times of crisis: the ones that work (for example, New York Gov. Andrew Cuomo’s daily updates to New York state residents or Arne Sorenson’s COVID-19 message to Marriott’s associates) and those that will last even longer in people’s minds but for the opposite reason.

Communicating the facts continues to affect action more than the point of views of so called "influencers."

If we had to place on a time delay the impact of headlines, we likely would see the warnings from medical experts and scientists having the strongest impact in building lasting memories for us all.

If we had to place on a time delay the impact of headlines, we likely would see the warnings from medical experts and scientists having the strongest impact in building lasting memories for us all.

Giving a voice to the scientists that know most of the impact of climate change — the obvious ones as much as the less obvious — most likely would yield a longer-lasting societal memory.

Where I place my sincere hope is not on the individual reflection left to each of us. Too often it is led astray by short-term needs that continue to inherently place ethics last in everyday choices.

Rather, I choose to trust in "social learning" — borrowing from a neuroscience publication of mine in the aftermath of the global financial crisis. Empirically, in periods of time when groups are called to make decisions in a state of ambiguity and extensive "known unknowns," decisions are more likely to be skewed to the near-term comfort zone and going for "good enough" solutions. Suboptimal, in both short and long term, as group decisions end up supporting individual decision makers. (Hint: This already could be happening as we see diverging scenarios in the debate regarding the post-COVID return to business as usual.)

How far can we go in terms of mobilizing resources (people and capital) if we restart the clock on effectively communicating climate change priorities? I think the real lesson of COVID-19 is that society can respond forcefully and collectively when enough of us are well-informed of what needs to be done, and the government supports individual action with laws, ordinances and other policy actions.

By using the "new" base case (the pandemic scenario) wisely and identifying the magnifier effect of coordinated group efforts led by science-based recommendations on flattening the curve, we may see the power of social learning in action.

I would expect the climate curve to be shaped differently from that of a pandemic.

Putting social learning to work, I would place the magnitude of population affected in the Y-axis as a function of a "social learning delay." The Y-axis (Affected Population, severity) as scaled from Least Affected/Vulnerable for The Shortest Time to the Most Affected/Vulnerable for the Longest Time. The X-axis (Social Learning Delay, time) scaled from the shortest time for "social acceptance of the climate crisis" to the longest time.

Counterintuitively, it becomes evident that effectively communicating on the societal issues of heightened climate risk requires addressing the group that exhibits the longest social acceptance and also the least vulnerable part of the population. Effectively communicating our climate risk scenarios to flatten the curve would need to move the climate risk dial of the least vulnerable segment of the population to be a matter "individually relevant" to them, now.

The implications of supply-chain instability, consumption patterns and everyday choices surrounding capital allocation and investing would be great places to start driving social learning in a climate change communication environment that amplifies the recommendations of scientists. 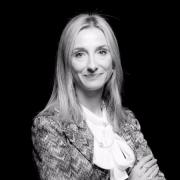 Sustainability metrics should grow along with bond yields

See all by Alessia Falsarone