Floating cities: the future or a washed-up idea?

Floating cities: the future or a washed-up idea?

Humans have a long history of living on water. Our water homes span the fishing villages in Southeast Asia, Peru and Bolivia to modern floating homes in Vancouver and Amsterdam. As our cities grapple with overcrowding and undesirable living situations, the ocean remains a potential frontier for sophisticated water-based communities.

The United Nations has expressed support for further research into floating cities in response to rising sea levels and to house climate refugees. A speculative proposal, Oceanix City, was unveiled in April at the first Round Table on Sustainable Floating Cities at U.N. headquarters in New York. 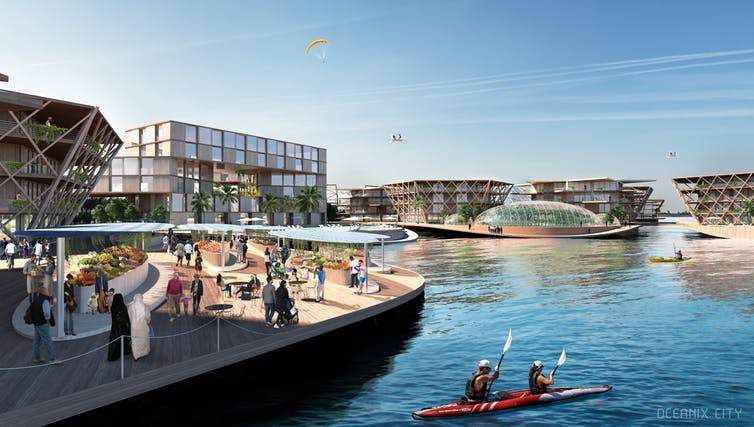 The former tourism minister of French Polynesia, Marc Collins Chen, and architecture studio BIG advanced the proposal. Chen is involved with the Seasteading Institute, which is seeking to develop autonomous city-states floating in the shallow waters of "host nations."

While this latest proposal has gained U.N. attention, it is an old idea we have repeatedly returned to over the past 70 years with little success. In fact, the Oceanix City proposal has not reached the same level of technical sophistication as previous models.

A brief history of floating cities

The architecture community was fascinated with marine utopias between the 1950s and ’70s. The technological optimism of this period led architects to consider whether we could build settlements in inhospitable places like the polar regions, the deserts and on the sea. 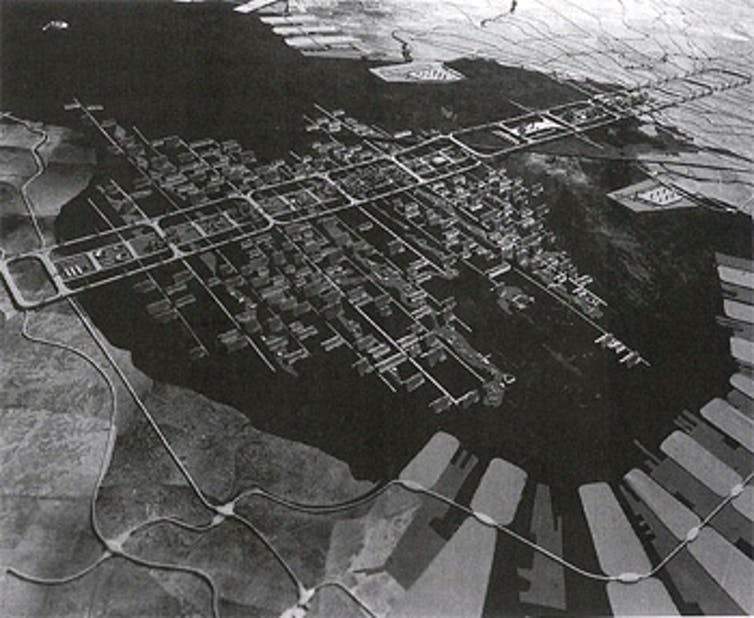 The Japanese Metabolists put forward incredible projects such as Kenzo Tange’s 1960 Tokyo Bay Plan and the marine city proposals of Kikutake and Kurokawa.

In the West, Buckminster Fuller proposed Triton City, which would be connected to the mainland via bridges. Archigram, a neofuturistic architectural group, proposed underwater sea farms.

These proposals were directed at solving the impending urban crises of overpopulation and pressures on land-based resources. Many were even sophisticated enough to be patented.

The arc of this global architectural discussion was captured during the first U.N. Habitat conference ("Habitat I") in Vancouver in 1976. In many ways, the U.N. has returned to the Vancouver Declaration from Habitat I to "[adopt] bold, meaningful and effective human settlement policies and spatial planning strategies" and to treat "human settlements as an instrument and object of development."

We are seeing a pivoting that began in 2008 with Vincent Callebaut’s "Lilypad" — a "floating ecopolis for ecological refugees."

Where floating cities were once dismissed as too far-fetched, the concept has been repackaged and is re-emerging into public consciousness. This time in a more politically viable state — as a means of addressing the climate emergency.

The technology and types of floating city structures

No floating settlements have been created on the high seas. Current offshore engineering is concerned with how cities can locate infrastructure, such as airports, nuclear power stations, bridges, oil storage facilities and stadiums, in shallow coastal environments rather than in deep international waters.

Two main types of very large floating structures (VLFS) technology can be used to carry the weight of a floating settlement.

The first, pontoon structures, are flat slabs suitable for floating in sheltered waters close to shore.

The second, semi-submersible structures (such as oil rigs), comprise platforms that are elevated on columns off the water surface. These can be located in deep waters. Potentially, oil rigs could be repurposed for such floating cities in international waters. 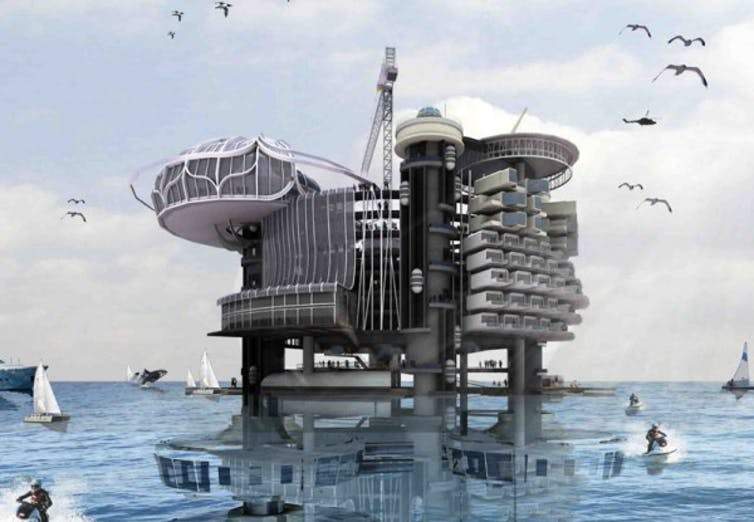 Oceanix City is based on the pontoon structure. This would restrict it to shallower waters with breakwaters to limit the impacts of waves. This sort of structure could serve as an extension of a coastal city, as a life raft for island communities inundated by rising waters, or to provide mobile essential services to residents of flood-prone slums.

While some early marine utopian proposals were responses to emerging urban issues, many proposals conceptualized "seaborne leisure colonies." These communities would be independent city-states allowing inhabitants to circumvent tax laws or restrictions on medical research in their own countries.

This sort of floating city was conceived of as a micronation with sovereignty and ability to provide citizenship to its occupants. The example was set by the Principality of Sealand, off the coast of Britain. 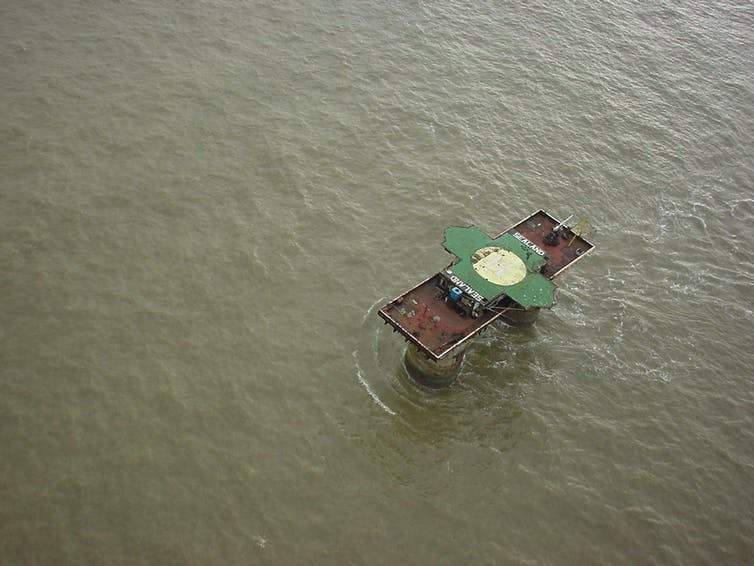 FlickrRyan Lackey
The Principality of Sealand is a micronation situated on Roughs Tower, a platform off the coast of Britain.

The Principality of Sealand is a micronation situated on Roughs Tower, a platform off the coast of Britain. Ryan Lackey/Flickr, CC BY

None of these proposals has succeeded. Even modern attempts such as the Freedom Ship and the Seasteading Institute’s plans for an autonomous floating settlement under French Polynesian jurisdiction have stalled. A recent attempt at creating a sovereign micronation (seastead) off Thailand led to its proponents becoming fugitives, potentially facing the death penalty.

Technology is not a barrier to floating cities in international waters. Advances in technology enable us to create structures for habitation in deep sea waters. These schemes have never really taken off because of political and commercial barriers.

While this time round proponents are packaging floating cities in a more politically viable concept as a life raft for climate refugees, commercial barriers remain. Apart from the U.N., few organizations have the economic and political influence or reason to deliver a satellite floating city in the ocean.

Given the significant risk of a community in extreme isolation in international waters, the solution to bringing people together in mid-ocean requires us to think about what connects us.

In my view, the future of ocean cities is in technology campuses and in tourism. Given the significant risk of a community in extreme isolation in international waters, the solution to bringing people together in mid-ocean requires us to think about what connects us: technology; work; and play. In these three elements we see, perhaps, the two lowest-hanging fruits (or the most buoyant of possibilities) for ocean cities.

The first is in floating tech campuses where large technology companies set up floating data centers and campuses in international waters. Situated outside national jurisdictions, these campuses could circumvent increasingly onerous privacy regimes or offer innovative technological services without having to negotiate regulatory barriers.

The second prospect is a return to the seaborne leisure colonies of the past. Companies such as Disney could expand on their cruise offerings to build floating theme parks. These resorts could be sited in international waters or hosted by coastal cities.

Given our fascination with living on water, even if Oceanix City does not suceed, it won’t be long before we see another floating city proposal. And if we get the mix of social, political and commercial drivers right, we might just find ourselves living on one. 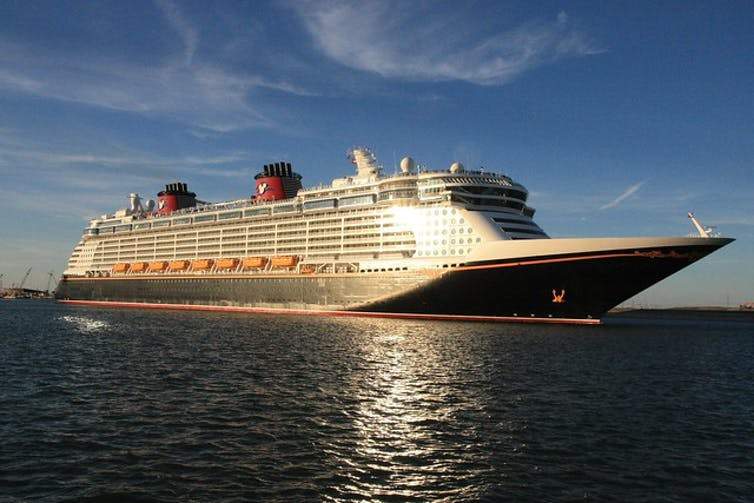 The Anthozoans Are Coming to Save Us! Corals Offer Concrete Solutions to Our Carbon Woes

In the depths of the oceans, business as usual takes a toll