Floating like the wind to a clean energy transition

Floating wind has the potential to make a huge contribution to filling the installed capacity gap in renewables and represents a game changer for the energy sector globally.

To a casual observer, the energy transition seems to be in full swing: Many governments and companies across the world are pledging to reduce their carbon emissions to zero over the coming decades, meaning that for the most part fossil fuels will have to be replaced by renewable energy. To meet these net-zero targets, however, and pivot from fossil-based fuels to low-carbon energy, renewable energy sources need to be developed urgently.

Unfortunately, this capacity does not exist, as recently explained to the G20 by wind energy executives. In 2017, almost 80 percent of global energy came from fossil fuels, and although renewable sources are growing fast, a huge installed capacity gap needs to be filled, particularly as energy demands continue to rise over the coming years. "Floating wind" has the potential to make a huge contribution to filling this gap and represents a game changer for the energy sector globally.

Above the ocean floor

The concept is fairly simple: Floating wind uses turbines located at sea but not drilled into the ocean floor to generate clean electricity. The turbines are towed out to sea and then erected on floating platforms, and can be towed back to shore for maintenance whenever required. The possibility to float turbines regardless of sea depth is a game changer in terms of capacity, and the potential for standardized manufacturing (compared to offshore fixed-bottom wind power) is a game changer in terms of cost.

Firstly, floating wind has a far greater additional potential capacity than either onshore or bottom-fixed offshore wind (wind turbines attached to the seabed). Onshore wind is often seen by local communities as an eyesore, and planning permission for new sites is becoming increasingly difficult to obtain.

Bottom-fixed offshore wind sites are limited by both water depth and existing maritime infrastructure, meaning turbines can only be installed in depths of up to 197 feet and cannot interfere too heavily with local communities and wildlife. Floating wind, on the other hand, can be installed regardless of sea depth, opening up vast tracts of ocean, which could be used for energy generation. It is estimated that floating wind has roughly double the potential capacity of bottom-fixed offshore wind, and this is only taking into account areas up to 124 miles from shore.

Secondly, wind levels are more consistent further from shore. This means that for similar installation costs, larger turbines with higher power outputs can be used, increasing energy and cost efficiency.

Thirdly, floating wind could facilitate the standardized design and production of turbines, which could bring costs down dramatically. Currently, different soil types and different sea currents mean each offshore wind park needs to be designed separately, driving up capital expenditure costs significantly. Standardization would reduce these upfront costs, and facilitate scale for production and maintenance, as well as the use of secondary materials, and recycling and reuse at the end of turbines’ lives. This level of scale will be key to cost reduction, and capex costs are already sinking very quickly.

As well as generating electricity (which could potentially be fed into grids), the opportunity to leverage floating wind technology to produce green hydrogen (i.e. hydrogen produced using renewable energy) exists, potentially even transforming existing oil and gas assets (e.g. platforms in the North Sea) into decentralized hydrogen production units. Theoretically, if the shipping industry moves towards being fueled by hydrogen, decentralized fueling units for ships could also be created, lessening demand on ports.

The outlook for jobs is also bright. The oil and gas offshore sector has traditionally been a large employer in many regions across the world (e.g. North Sea, Gulf of Mexico, Persian Gulf). For years, workers trained in offshore oil and gas have developed skills and expertise in a dangerous environment: these same skills are directly transferrable to floating wind, e.g. equipment inspections, staffing supply boats etc.

Ensuring a socially just energy transition is key to its social acceptance: floating wind can ensure that some of those hardest hit by the shrinking oil and gas sector will benefit directly from new jobs created by the scale-up of renewable energy. Floating wind will also bring local jobs: ports will need to be upgraded, turbine maintenance will be done locally, and production of turbines and support structures could also take place close to new wind farms. All of this will mean that local communities benefit not only from clean energy, but also from the economic benefits in its wake.

The path ahead for floating wind is not obstacle-free, however. Floating wind remains a new technology, and not all investors are willing to bet on it. Costs remain higher than fixed-bottom wind currently, with high costs for cables and connection to the grid required. Indeed, in some situations, connecting to local grids may not be feasible, requiring alternative measures to bring energy to the shore, such as green hydrogen. Huge and highly developed port facilities will also be required to service turbines effectively, infrastructure which cannot be built overnight.

To jumpstart investment, subsidies will initially be required (unless carbon externalities are adequately priced for), until standardization, learning and scale brings floating-wind costs below those of comparative methods. Current estimates see 2035 as the moment when levelized costs for bottom-fixed and floating wind converge, but it is possible that this moment could be reached much sooner.

As Will Hancock, senior structural engineer at Wood Thilstead, explains: “There is a scenario under which floating wind becomes the cheapest form of wind energy within 10 years (…) mainly driven by standardization of turbines and increased site availability.” 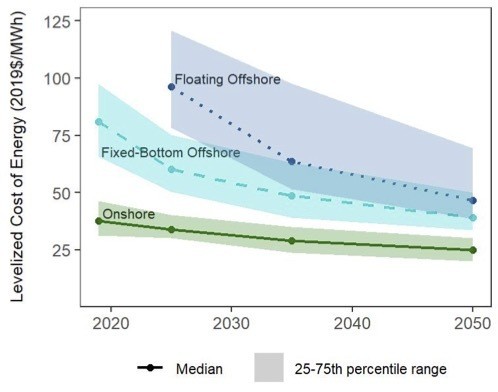 Across the world, governments, organizations and ordinary people are discussing carbon emissions as a matter of urgency. It seems that floating wind is often missing from this debate. Not only do governments need to ensure financing for this new technology (e.g. through subsidies to speed up scaling), they also need to make sure that planning for new projects is prioritized, and collaboration when projects located on the high sea (i.e. not within any one country's jurisdiction) are planned.

The opportunity presented by floating wind is huge, and the need for its urgent scale-up equally so.

Why repair is the first step to tackling smartphone e-waste

See all by Mo Chatterji