[Editor's Note: this article originally appeared on BusinessGreen, and is reprinted with permission.]

A Ford car plant which was recently shut down as part of cost savings by the car maker is being converted into a facility for renewable energy companies.

The facility in Wixom, Michigan, which at the height of production had about 5,000 workers, closed in 2007 with the loss of 1,000 jobs. The site will now be converted into a business park for a series of renewable energy companies, which the backers claim could generate about 4,000 jobs.

Ford said it has been working with energy storage system provider Xtreme Power and solar panel maker Clairvoyant Energy, who will be the first companies to take up residency in the 320-acre site and its 4.7 million square feet of plant space. The two renewable energy providers have invested about $725m (£635m) to redevelop the site, with work expected to begin early next year and clean tech manufacturing expected to get underway in 2011.

"The Wixom Assembly Plant served Ford well for half a century and we wanted to ensure it served Michigan well into the future," said Ford executive chairman Bill Ford. "Thanks to the collaborative efforts of two visionary energy companies and the leadership of state and local officials, we are transforming our Wixom facility into one of the largest renewable energy parks in the U.S. I can't imagine a better way to use this facility -- for ourselves, our children and our grandchildren."
{related_content}
Although Ford and the other companies involved discussed their role in developing the site, the backers also admit that state and local incentives were key to the project including refundable battery and photovoltaic tax credits, Michigan Economic Growth Authority employment tax credits, Renaissance Zone tax incentives and brownfield tax credits.

Xtreme Power systems, which develops technology to integrate renewable energy onto the electricity grid, will use more than one million square feet of the site.

"This move is significant on both ends of the spectrum," said Carlos Coe, president and chief executive of Xtreme Power. "It underscores a significant shift toward the accelerated commercialisation and adoption of strategic renewable energy technologies, due in large part to the deepened commitment on the part of local, state and federal policymakers to support companies like ours." 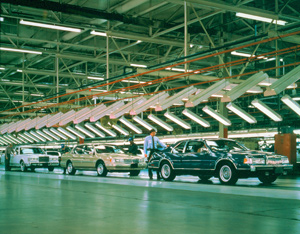 For its part, Clairvoyant Energy says it will have the capacity to produce more than 2.5 million solar panels a year at the Wixom site, which the company claims could equate to the need for one large coal plant every year.

The Wixom Assembly Plant was one of Ford's largest and oldest manufacturing sites, producing 6.6 million vehicles during its 50 years of operation. Production began in 1957 when Wixom became Lincoln Division's new national headquarters and the sole producer of all vehicles for the Lincoln Division.

"Over the years, Wixom Assembly produced the Lincoln Continental, Town Car, LS, Mark VI, VII and VIII, as well as the Ford Thunderbird and Ford GT," Ford said in a statement.

In May, Ford announced that it would invest $550m in converting a Michigan plant currently used to manufacture SUVs into a factory specialising in small, fuel-efficient cars that will also produce its first electric vehicle.

Documentary film maker Michael Moore covered the plight of sacked Michigan car workers in his 1989 film Roger and Me.

How to Develop a Sustainable Water Strategy

See all by Andrew Donoghue