While auto shows are traditionally used to introduce new models of vehicles, over the past two years Ford has used the North American International Auto Show (NAIAS) to focus more on showcasing its evolving business model. Gone is Henry Ford's original vision of vertical integration -- from "ore to auto" -- along with his famous dictum that you can get "any color you want as long as it's black." These have been replaced by wide-ranging partnerships and a platform strategy for its vehicles that gives consumers the ultimate choice in selecting an energy strategy that fits their lifestyles and their pocketbooks.

The New Model Ford -- It's Small

Ford used the NAIAS show to roll out a family of C-segment automobiles. The C-segment line is a new generation of vehicles built on a common platform. By leveraging a common platform, Ford has opted to introduce electrified versions of traditionally powered cars.

Unlike GM's Volt and Nissan's Leaf, which are unique electric vehicles, vehicles leveraging the C-segment platform can be built utilizing electric, hybrid, plug-in hybrid, fuel cell, or more traditional internal combustion power plants. This new platform is what president and CEO Alan Mulally calls his "One Ford" plan that allows the automaker to be more nimble in bringing out new models across a number of global markets and offer more choices for fuel efficient vehicles.

To highlight how much the new platform is a reflection of changes at Ford in the last couple years, one Ford executive noted "we used to be a truck and car company and now we're a car and truck company -- that's a big change." According to a Ford press release, in 2004 cars and crossovers represented only 35 percent of Ford sales volumes, with trucks and SUVs claiming 65 percent. By 2010, cars and crossovers accounted for up to 57 percent of overall sales. Small cars like the Ford Fiesta and Ford Focus now represent one in five new vehicle sales in the United States, up from 14 percent of the market in 2004.

The vehicles introduced at the auto show demonstrated Ford's execution of its electric and hybrid strategy laid out a few years ago. One part of that strategy that would have surprised Henry Ford is the company's collaboration with other companies. Their first electric vehicle, now in production, is the Transit Connect Electric commercial van equipped with an Azure Dynamics battery electric powertrain.

On a small test track on the show floor, Ford demonstrated the quiet and smooth ride and explained that while the vehicle had a range of 80 miles before it needed to be re-charged, most commercial fleet vehicles (such as those driven by AT&T and Southern California Edison, both early adopters of the Transit Connect Electric van) average 23 miles per day. 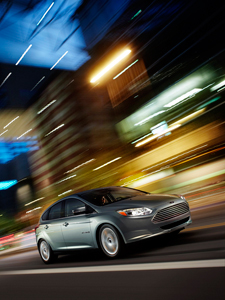 For consumers with no pre-defined delivery routes and perhaps a bit more range anxiety, one of the big announcements at both the Consumer Electronics show and NAIAS was the MyFord Touch instrument cluster. Working in partnership with Microsoft on the technology platform, Ford has produced a user interface and set of apps to provide traditional vehicle information (such as a speedometer and fuel gauge) along with more esoteric ways to monitor your driving. Butterflies are the main theme (the more you have the further you can drive), but more engaging is the "Coach" application.

In providing an overview of the new interface, a Ford spokesperson noted that achieving maximum range in electric vehicles will be a big part of the fun for many drivers, especially early adopters. Drivers can plan their trip using the My Ford Touch interface and the coaching application will advise the driver on how to achieve the desired range -- or if travel plans need to be adjusted. Further, by utilizing the vehicle's navigation system, travelers can identify where charge stations are located. And using the Ford SYNC technology that integrates a driver's cell phone with the vehicle, drivers can also check up on their vehicle status remotely.

Charging the batteries in Ford's electric vehicles brings another collaboration and more technology. Best Buy has partnered with the auto company to sell 240-volt home charging stations for Ford's 2012 electric Focus. The Geek Squad will perform installation as they continue to expand services to support consumer energy management programs. In an interesting twist, owners can choose to "value charge" -- telling the car when they plan to leave and letting it figure out the best time to charge -- or drivers can set a precise time window for charging to occur.

Ford's Green Light for the Future

Ford clearly took center stage at the auto show. I should point out that I was there as part of the company's 2-day Driving Green Technology event where they paid for my travel and accommodations, but in no other way compensated me. None of that swayed my opinion.

I first learned of Ford's vision during an on-stage conversation between Marc Gunther and Bill Ford at Fortune's Brainstorm Green event last year. It was intriguing then and it's even more interesting now to see how quickly Ford is evolving as a model of sustainability. Their financial prospects are solid as the only one of the big three automakers that didn't need to be bailed out. Their environmental record has been exemplary (click here to see a great overview of the company's sustainable materials strategy) and the new line up of vehicles gives consumers a choice in how they can drive to protect the environment.

As the worlds of energy, information technology, and transportation converge, there is nothing that can guarantee success for Ford (you can read some random notes about potential challengers here). But for now, the company is starting to deliver on a strategy that should make its prospects a brighter green for the future.

In addition to covering the activities promoted by Ford at the Detroit Auto Show, there were numerous other cars to gawk at and sites that were at once strange and intriguing.

In the back of the Lexus display was a sign that read "Welcome to the darker side of green." Besides being flat out creepy, there was no other context for the message. As one British reporter noted, "the car was yellow, so I had no idea what that message was supposed to mean."

It was good to see Bentley doing their part for the environment. The company introduced the new Mulsanne, whose "CO2 emissions and fuel consumption are reduced by more than 15 percent, in line with Bentley's environmental commitment."

Tesla unveiled their Model S, an attractive four door family sedan that is projected to go from zero to sixty in under six seconds – probably an important feature for getting the kids to school on time.

Mercedes and BMW competed for kudos in sleek design elegance, while Toyota announced a expansion of the Prius line with a contest to determine the plural of the hybrid model. Prii? Prium?

The most intriguing exhibitor was Chinese automaker BYD (who Marc Gunther wrote about here). The initials stand for Build Your Dream and while it may have been the least interesting booth display, it is certainly the most intriguing business model.

BYD is reaching beyond Henry Ford's model of vertical integration, where the manufacturing icon owned rubber plantations and iron mines to secure the raw materials he processed into vehicle components. BYD has established three green dreams to develop solar panels for power generation, batteries for energy storage, and electrified transportation to bring about a zero emissions eco-system.

In discussions with several executives at the show, my sense that this could be a major challenger was confirmed as one executive explained the evolution of the industry. "The Japanese surprised us and our industry had to work hard to get back to parity. But the Koreans evolved even more quickly, having learned lessons from both the American and European automakers as well as the Japanese. I think the Chinese will have the fastest growth of all and will be a major player in the global automotive market."