The 2010 Ford Flex will include the auto industry's first use of wheat straw, a waste byproduct of wheat production.

Wheat straw will make up 20 percent of the vehicle's two third-row storage bins, lowering the bins' weight by 10 percent, reducing Ford Motor Company's petroleum use by 20,000 pounds a year and lowering its carbon dioxide emissions by 30,000 pounds a year.

Ford is already looking at expanding its use of wheat straw to other car parts like center console bins and trays, armrest liners, interior air registers and door trim panels.

The use of wheat straw in the plastic bins also represents the first production-ready application to come out of the Ontario BioCar Initiative, a collaboration among Canadian universities and the auto industry to advance the use of plant-based materials. 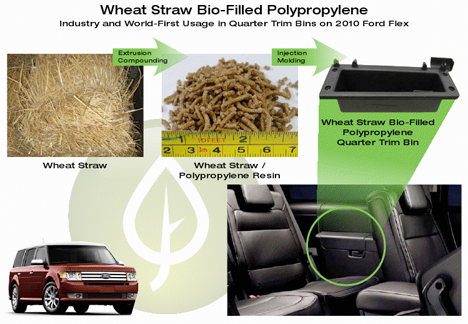 The University of Waterloo, one of the members of the BioCar Initiative, came to Ford with wheat straw-reinforced plastics that it developed with the help of plastics supplier A. Schulman. Within 18 months the material was approved for use in the Flex, which is produced in Ford's assembly plant in Ontario.

Ford and its suppliers have been working with four farmers in Ontario for the wheat straw they need. Within Ontario, there are 28,000 wheat farmers that have 30 million metric tons of wheat straw waste available at any given time.