An interview with Jon Powers, CSO for the Obama administration and co-founder of CleanCapital.

Jon Powers, a military veteran who served as chief sustainability officer for the Obama administration, spoke with Camilo Monge about what challenges the nation faces in the short run, what public policy measures should be supported and saved, and what a carbon tax could do for sustainable energy.

Now, after cofounding CleanCapital, a platform through which clean energy projects are able to find investors, Powers speaks often at universities and conferences. He discusses his views on the future of renewable energy, shares how countries around the world are tackling their energy challenges and talks about what the United States can do to advance the market for clean energy.

Jon Powers: For solar, a couple of things have happened. First, you have the solar Investment Tax Credit that was put in place by the Energy Policy Act of 2005. What that means is that you can take 30 percent of the construction price of a deal and get paid through tax credits — which is pretty efficient money. That is a big driver bringing down the costs of projects. This helps accelerate the growth of the solar industry overall.

By law, the 30 percent will ramp down, but it just got extended. What is unique about [the tax credit] is that when the negotiations were made between Republicans and Democrats to have that ramp-down extended, there was also a joint negotiation to open up oil exports. So that was the Republican ask on energy tax credits.

The second federal policy I’d mention is the SunShot Initiative. The program is part of the United States Department of Energy, which touches multiple verticals in the industry. It set a goal to have utility-scale solar cost approximately $1/W.

So, how do we reach $1/W? They started to address the different verticals, identifying certain grants for soft costs and thinking about how to get panel prices down. They looked at all the different mechanisms and barriers and tried to solve those puzzle pieces.

The tax mechanism was great, because it was a hammer to the industry — in a good way.

If you think about the two mechanisms, the tax mechanism was great, because it was a hammer to the industry — in a good way. Meanwhile, the SunShot Initiative was in essence a center of excellence — like a think tank — recognizing problems and trying to then address those problems and bring efficiency to the industry. The combination of both has been priceless in making the industry go where it is right now.

The price per watt [relates to] how much it costs to do an installation. Years ago, it was around $4/W and they wanted it to go to $1/W. Remember you are in a competitive space where the price of the electrons coming off that project its crucial. They called it grid electric price-parity. So, if I want to pay 7 cents/W or less for solar because the installation and the price are cheaper, then it makes sense to go solar. Driving down those costs to $1/W will help us get there. That is a great way to have a forcing mechanism for the market.

Monge: What would be the optimal scenario regarding these policies?

Powers: Consistency. At this point, for example, the ramp-down in the solar tax credit is OK because the price of panels is coming down. And if we want to completely get away from the need for tax credits, it will be OK to continue to ramp down over time, but consistency will be the most important thing.

The trick to the tax credits is that it is still an expensive part of the capital structure. It will be great when we don’t need to fund tax equity into a deal, but we are not there yet. Some will argue that we will be better off when the credits are gone — or even stronger for not having the hindrance of requiring the policy.

With that said, if you look at fossil fuels, they have had incentives in place since the 1920s, so I think what people really want to do is to level up the playing field.

The SunShot Initiative looked at the market and said, "What are the costs here?"

Sixty-four percent of our project costs consist of soft costs, which means permitting fees and financing. [It also includes] all the different pieces that make up that 64 percent.

Looking at those costs, they said, "Where can we apply pressure to bring more efficiency?" The initiative would look at those different pressure points and figure out mechanisms to address them. It was a very successful program. The goal was to achieve $1/W; I think they have surpassed it already. This may change with the tariff, though, because of the increases in some of the costs.

Now, the budget for programs like the SunShot Initiative has been eliminated by this administration. They are letting those good programs die. So, to be efficient, we need to keep those programs up.

The good news is that a lot of people in Congress support those programs, so whatever Trump says will be on the budget, they will counter with their own budget. It will be supported at some level. We need to support the programs that work. 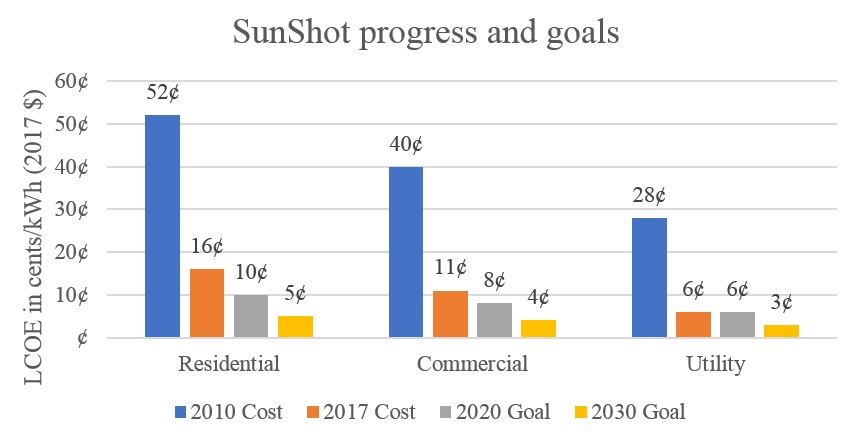 Monge: When do you see the industry becoming mature enough to not require incentives?

Powers: I don’t want to put a date on it, but we have seen a 471 percent growth in the industry since 2008, which will continue. Prices will continue to come down. If we can set a goal, as an industry, to spin off the need for incentives, we will all be healthier by the time they expire.

Monge: Which policies are inefficient or need improvement?

Powers: On the flip side, I think first about the solar tariff. That has been this unnecessary item that came out of the Trump administration. It’s going to be a painful price for a while — and it will hurt the industry. It’s going to be good for some manufacturing — but for the much broader industry, it’s not going to be helpful.

The reality is that it is not like one country does everything. So, what we are really doing is combining all these different parts of the supply chain. It’s a tariff that starts at around 30 percent of the panels, in essence, and then will reduce over time. The idea behind the tariff is that we can charge Chinese panels more and our manufacturing base will get stronger and add jobs.

The budget for programs like the SunShot Initiative has been eliminated by this administration. They are letting those good programs die.

Then, there is the inability of Congress to provide certain financial structures like MLPs (master limited partnerships) and REITs (Real Estate Investment Trusts). Those financial structures would help bring cheaper capital to the market, but they would have to pass legislation.

Monge: Is there any other piece of legislation or policy that should be promoted or improved?

Powers: The Clean Power Plan has been put in place by the Obama administration. The plan talks about addressing greenhouse gas emissions through the efforts of a rulemaking process. This is being dismantled by the Trump administration. The plan would set GHG emission goals for all these different states. They would set different strategies to get there. So, this plan helps hold them accountable for actions like trying to bring old power plants offline and putting up incentives for clean energy. Scott Pruitt, the current EPA head, is trying to dismantle everything.

We, in the United States, managed acid rain, which was a huge issue in the '80s and '90s. The Clean Power Plan is a similar type of model that’s trying to create market mechanisms to drive change. Pruitt, who is an oil-and-gas person, has tried to put an end to it.

The other [policy] that doesn’t exist, but should, is a carbon tax. What you really want is a carbon mechanism. The question is, how can you create a market for carbon between carbon emitters? This would incentivize industries like solar or energy efficiency.

The reality is that this is not going to happen during this administration with this president or probably with this Congress, so you have states trying to do carbon-trading schemes. It’s fine to have a regional approach, but what we need is a national solution here.

Why the energy finance cycle is prime for disruption

See all by Camilo Monge