A nuclear bunker in Stockholm has been transformed into a data storage center [and designed by Albert France-Lanord Architects], which boasts a range of green credentials. 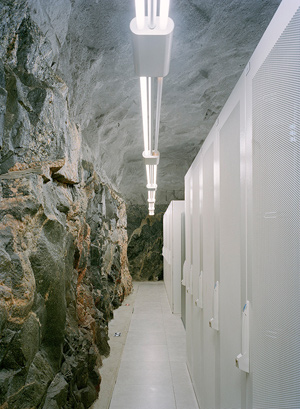 The Pionen White Mountains bunker is 30m (98 feet) beneath the ground, and Sweden's northern climate means that it can be cooled naturally for up to ten months of the year, leading to siginificant cuts in costs and CO2 emissions.

Data centers account for around a quarter of the world's emissions from the IT and communications sector.

The environmental benefits coupled with low electricity prices, stable political situation and no history of disruptive natural disasters have seen Sweden become a sought after location for data centers, with several international ICT companies choosing Stockholm as the base for their servers.

The video below explains why a nuclear bunker is the environmentally sensitive answer to house a power-hungry data center.

U.K.'s Forestry Commission Turns to IT for Climate Solutions

Energy Efficiency Must Be a Household Need Like TV, Internet: U.K. Minister

See all by Sam Bond