What an emotionally combustible mix for me.

First, the chance to be in the city where the fate of the planet is being discussed. Okay, so I wasn’t rubbing elbows with Lauren Fabius, Narendra Modi and Todd Stern negotiating the fine print of the COP21 accord. But to be in Paris, along with 40,000 others dedicated to coming up with an agreement the save the planet, was stimulating.

Second, for that city to be Paris, a city I know well, having worked with French companies for three decades. Wednesday, on my way to a speaking gig at the Grand Palais after the International New York Times Energy for Tomorrow event, I literally “wandered down the Champs Elysee,” to steal from a Joni Mitchell song. I passed by a café I remembered visiting on my first business trip to Paris. Not a lot of time to linger and reminisce between conferences, but moving nonetheless.

And lastly, to visit Paris just three weeks after the shock of the November 13 attacks added further poignancy. To hear the stories of my Parisian friend Thierry, whose 21-year-old daughter was out and about the night of the attacks, heard shots and was locked in the basement of the bar for three hours while everyone tried to sort out the chaos. To see the police and soldiers in force, seemingly at every corner, at every event, in every traffic jam. To go through security checkpoints 50 times in a week.

The town collectively seemed to be, to borrow a phrase I heard after 9-11, one blink away from tears.

As always when in Paris, I rode the French public transportation system, staying taxi-less and Uber-less for 10 days via the TGV, the RER train and the Paris Metro. More than once I heard them announce suspended train service due to a colie suspait (“suspect package”). More than once I watched someone jump at the sound of an unexpected train noise. The town collectively seemed to be, to borrow a phrase I heard after 9/11, one blink away from tears.

It was a poignant and proud week for Paris and the French to host such an event. Their city was on display, their heritage of defending the droits de l’homme, their tradition of French being the “language of diplomacy.” The city conjures up seminal images — from the French revolution, to Nazis and then GIs parading under the Arc de Triomphe — that serve as a fitting backdrop for the ambitious and global scale of COP21. 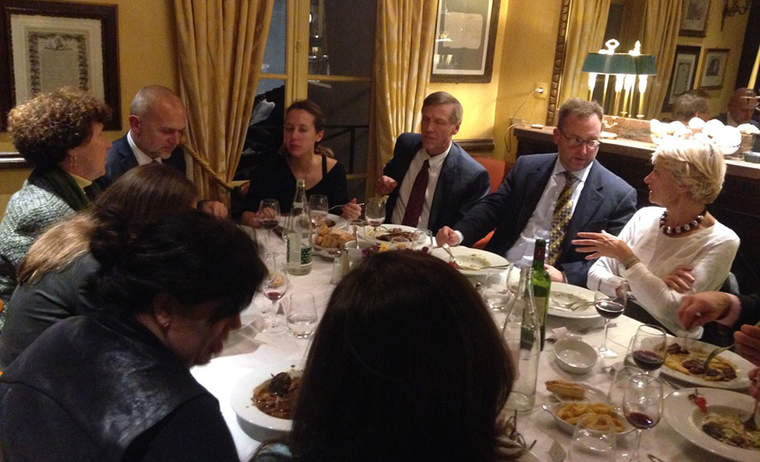 We took some of our biggest GreenBiz clients to dinner Monday night at Le Procope, Paris’s oldest restaurant, dating back to 1686, frequented in their day by writers like Voltaire and Victor Hugo. The waiter pointed out that the original wallpaper still hung from 1830 with the words liberté and égalité pasted on it. Okay, so the interior decorator at the time cut a corner and left out fraternité, but it was still inspiring.

I had two speaking appearances at the Grand Palais, the majestic 1910 Beaux-Arts building off the Champs Elysees, with its iron and glass vault ceiling. It housed the exhibit area open to the grand public — the public at large — and showcased the environmental booths of 100 or so big companies.

I missed the fireworks there a few days earlier, when French activists duked it out with police and climbed lampposts outside the building. By a few hours, I missed French President François Hollande’s visit to the booth of GreenFlex, the French consulting company that had invited me to speak.

What's French for “Eat your own dog food”?

Speaking on French panels was fun, like the GreenFlex panel on technology solutions for climate.  I sought to give the French multinational companies in the audience some insight into what is going on in Silicon Valley, peppering my talk with examples of companies bridging the gap between sustainability and technology, like ChargePoint, SunPower, Enlighted and View.

And even though I surely botched more than a few French words in my talk, I benefited as always from the shock effect of “Oh my God, zee American is speaking French!” My GreenFlex counterparts talked about their work in the food, tech and retail sectors. They used Franglais words like “Les Data Centers” and “Les Start-ups,” flipped around NGOs (ONGs in French) and didn’t catch the irony when they talked about the croissance of sustainability in the food sector.

I got a chuckle from the audience trying to explain the phrase “Eat your own dog food” while explaining why we built a functioning microgrid for our VERGE conference in October in San Jose. I ground to a halt, gave up and switched to English in a sentence that contained references to LCAs and PLDs.

I spent most of time in the center of Paris at the business conferences and only one afternoon out at Le Bourget, where the UN negotiations were happening. Over the week I saw an amazing lineup of speakers and stars.

Bono has the gifted politician’s ability to blurt out the right thing at the right time, like when he said Nous sommes tous Parisiennes (“We are all Parisians”) post-Bataclan.

First off, hours after my arrival, I got a chance to see U2, just there weeks after it had cancelled its concert, originally scheduled just after the November 13 attacks. It was a moving performance, thinking about the Bataclan massacre to the strains of songs like “Sunday Bloody Sunday.” Bono has the gifted politician’s ability to blurt out the right thing at the right time, like when he said Nous sommes tous Parisiennes (“We are all Parisians”) post-Bataclan.

At the business events, it was as difficult to pick out which big companies were not in the room as it was to see who was there. There were plenty of “subnational actors,” in UN speak — mayors, governors and the like.

All sizzle, no tofurkey

Lest you think the COP21 conferences were all sizzle and no tofurkey, so to speak, be reassured the city with crawling with deep experts on SDGs, PLDs, PPAs, LCAs, NZE, GHG, Circular Economy, Green Bonds and more. The high-eco-IQ and scientific grounding of the speakers and attendees ensured that greenwashers, if they were even present, were called out quickly at COP21.

Since I’m both a smartass and polyglot, I got a chuckle from more than one speaker. A French NGO kicked off a session on the “I’m PORT TAUNTS off ASH EVing” deep carbon reductions. A Spaniard rolled his R's impressively through a discussion of reductions, renewables and recycling, and decried “e-sprawl in e-cities.” My one trimester of Mandarin paid off as I recognized at least two words when Chen Zhen, Secretary-General of CEDAAB, China's Exploration and Design Association architecture branch (I wonder who their branding firm is) spoke through a translator. Shi!

But did we save the planet?

U.S. congressional climate foes have already declared that Paris was just one big party, a waste of time and money at best. On the other side, radical activists were outspoken in painting big businesses as greenwashing their way through COP21 without real change.

I’ll leave it to others to analyze the substantive outcome of COP21. That said, I’m confident that Paris will be seen as a seminal moment in the fight to arrest global warming. To quote Ronald Reagan, the godfather of neo-conservatism, as he applied it to Soviet arms reductions, the key is to “trust and verify.” That is, trust that governments, businesses and NGOs can together set ambitious efforts to halt global warming, and verify that they live up to them.

It’s refreshing to hear about companies like Dow and General Mills, not who you might think of as crunchy green companies, getting lauded for ambitious climate targets.

The tension we saw at COP21 is healthy and leads us down a strong path. Businesses stepped up commitments, sometimes courageous in the face of investor scrutiny, and were increasingly called out when they didn’t. It’s refreshing to hear about companies like Dow and General Mills, not who you might think of as crunchy green companies, getting lauded for ambitious climate targets. As BSR’s Ed Cameron said at the WBCSD event: “I have never seen so much buy-in from major companies. “

Countries like Canada, not exactly a traditional foe of heavy-emitting and extractive industries, stepped up to the 1.5° Celsius ceiling pledge. NGOs worked to keep governments honest and ambitious, keep commitments substantive and represent important “non-state actors.” And cities rolled up their sleeves and showed a path to how it all gets done.

It all feels like the realistic path we need to keep our planet “unfettered and alive.”

How business can participate in Paris

A change of climate in how activists view business