The Future (and Past) of the 'Office of the Future'

This week marks the 30th anniversary of the publication of my first book. Titled, Office Hazards: How Your Job Can Make You Sick, it chronicled the transformation of office environments and office-based work that was taking place at the time. Looking back three decades later, a lot has changed — and some things haven't.

(The book, long out of print, can be found online from anywhere from a few cents to a few dollars. See here, here, and here, for example.)

First, some context. When I wrote the book, in 1980-81, several trends were taking place in offices. Buildings were being sealed tight to save energy; windows were no longer operable. Interior walls were being demolished to make way for "systems furniture," the open offices that derisively became known as the "cubicle culture." Synthetic materials were being introduced: carpeting, wallcoverings, particleboard furnishings, and more. Computers were being introduced (primarily as workstations connected to mainframe computers; personal computers would come along shortly).

The result: Workers could no longer open or close doors or windows, or turn on or off lights. The temperature was controlled by a computer in the basement. Workers were adjusting themselves to accommodate the newfangled computer terminals, rather than the other way around. (Ergonomic furniture was just being introduced.) Some of the work itself was becoming machine-paced, broken down into "processes," much like in a factory.

The impact of all these changes was being felt increasingly on office workers. As I wrote in the book's intro:

The nature of the problem is such that the individual hazards in offices are often rather small, seemingly trivial things. Office workers rarely drop dead or lose limbs on the job. An uncomfortable chair does not seem like a major calamity; neither does stuffy air or a few ringing telephones. But put an office worker in a bad chair in a noisy, stuffy office, require that worker to perform a dead-end job for low pay on a video display terminal with a dirty screen made worse by the harsh glare from fluorescent lights, add a dash of pressure — a ruthless supervisor, for example, or economic pressures or family problems — and you’ve got an explosive situation, the stuff from which headaches and heart attacks are made. 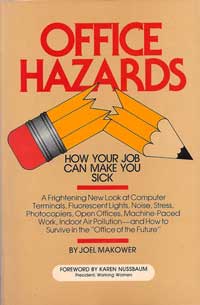 OK, three decades later, I’ll admit to a little hyperbole. But the overall trend was unmistakable. Companies were beginning to offshore data processing and other rote chores to office factories. Office workers, overwhelmingly female, were beginning to organize. The movie Nine to Five, starring Lily Tomlin, Jane Fonda, and Dolly Parton, came out as I was writing the book. The first office workers union — Local 925 — was formed in 1982 by the Service Employees International Union. (The woman who would become president of Local 925, Karen Nussbaum, wrote the foreword for my book while she headed the working women's group 9to5.) It was time to reexamine what had become known as the “cushy office job.”

Thirty years later, much has changed. Indoor air pollution (or, in its extreme, "sick building syndrome"), while still a problem, especially with legacy buildings, is being addressed through more effective and energy-efficient heating, ventilation, and air-conditioning equipment. (Also from office smoking bans: According to research I cited in 1981, fully 35 percent of office employees still smoked at their desks.) The aches and pains of computer work have been partially mitigated by ergonomic furniture and, in some companies, preventive wellness programs that train employees how to work more comfortably. Office furnishings are much more flexible; some workstations have controllable lighting and air conditioning.

Buildings themselves have become, over time, green, high-performance, and smart — at each step further improving their efficiency while making their working conditions more hospitable.

Having tracked the state of office buildings and environments these past three decades, I can tell you that the changes we’ve seen over the past 30 years are only a warm-up for what’s to come. A combination of technological advances and societal shifts will continue to reshape the work environment. For example, telepresence and telework — not to mention the ability to receive and send email anywhere, 24/7 — are making all of us less dependent on going to offices. And they are giving employees more choice about how, where, and when they work.

Meanwhile, building technology continues to expand rapidly, along with our ability to manipulate it. As we learned in our recent VERGE roundtables, a good-sized building generates 80,000 points of data from every fan, switch, computer, plug, light, and appliance. If you sampled just 10,000 of those data points every 15 minutes around the clock, you’d end up with 6.7 million data points a week. That’s a lot of information with which to measure, monitor, and optimize a building (and, potentially, its occupants).

Beyond that, there is growing recognition of the impact buildings themselves have — not just on the environment, but on the fabric of a community. Where and how they are sited, designed, and operated can impact local infrastructure and affect community well-being. They can also affect company brand, both positively and negatively.

As my friend Angela Nahikian, director of global environmental sustainability at Steelcase, the office furnishings giant, told me recently: “The boundaries are dissolving between traditional architecture, building automation, human behavior and community infrastructure, and as they do, the implications for companies extend beyond their brand to the very well-being of their people and society at large.”

The systems thinking behind offices remains nearly as absent today as it was in 1981. We still see people, furniture, technology, and buildings as separate components, largely independent from the others. We don't view them as parts of a system that are interdependent — never mind the other components: the nature of the work being performed, the community in which a building exists, etc. And by failing to see offices as systems, we sometimes miss opportunities.

There's no better illustration of this than the story of the Air People and the Chair People.

The story, which I encountered while writing Office Hazards, involved a large office building in midtown Manhattan, where office workers complained that the heat was being turned off in late afternoons. Management insisted this wasn't the case and brought in a succession of experts over the next few months to determine why so many employees were experiencing chilly climes.

First came the building engineers, who demonstrated that all systems were operating as they should. Next came the HVAC professionals, who checked and rechecked the heating and ventilation system and declared it, too, in working order. Then came industrial hygienists, work-flow experts, even organizational psychologists, none of whom could discern the nature of the problem.

Finally, one enterprising soul, a secretary, promulgated a plausible theory. The company, it seemed, had recently introduced computers into the workplace. Because workers were using their old desks and chairs, which were not adjustable, they had to adapt their bodies to accommodate the new technology, rather than the other way around.

It turned out that many employees were being forced to sit in a way in which the edge of their chairs cut into the back of their legs behind the knee, restricting blood flow to their lower legs. The result: As the day wore on, people's feet and lower legs got cold. By mid-afternoon, it felt as if someone had turned off the heat.

I tell this story in part because of the delightful (and poetic) simplicity of it all, and the sheer audacity that a secretary could figure out what so-called experts could not. It also speaks volumes about the power of diversity: the richness that can come from tapping the potential of everyone in the organization. It underscores what can happen when folks cross traditional boundaries to share information and discuss ideas — that is, when the Air People talk to the Chair People. And it underscores the need for systems thinking, that everything and everyone in an office environment are connected.

I am continually astounded at how little holistic thinking happens inside buildings and companies. But I have no doubt that there are countless problems that could be fixed — and countless dollars saved — if only the Air People would occasionally sit down with the Chair People.