The future of ferries is electric, too

Docked between San Francisco's famous Fisherman's Wharf and rows of vendors hawking clam chowder-filled bread bowls sits what could be the future of ferry transportation.

There you'll find the Enhydra, a 128-foot-long hybrid ferry operated by Red & White Fleet, a tour guide company that's one of San Francisco's oldest businesses. The boat can shuttle up to 600 passengers for over an hour using lithium-ion batteries. For a ferry, that can mean a few things: It can cut dirty diesel fuel use, reduce air pollution and operate silently.

Last month I took a tour of the Enhydra and checked out the batteries developed by Corvus Energy, a company that makes energy storage solutions for the maritime industry. BAE Systems integrated some of the technology, which also includes gear from Cummins.

Red & White Fleet engineer Paul Smith was kind enough to show me around down into the engine room where the batteries are housed and up to the control room, where computers and crew manage how the boat switches on and off the battery power. Smith maintains the Enhydra, and said of battery-powered ferries: "I think the market is going that way. And I think the company is at the forefront and wants to continue in this direction." 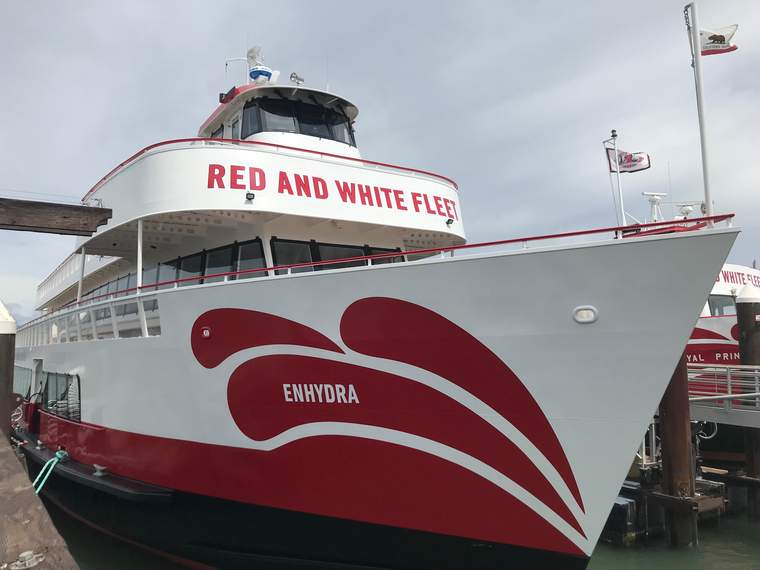 Red & White Fleet plans to have a zero-emissions fleet by 2025. Ferries, like ground transportation, are starting to electrify.

Bloomberg recently reported that 185 battery-powered marine vessels either are operating or planned for delivery around the world, including 58 passenger ferries. So yes, it's not a lot yet, but it's an area that's growing.

Many of those electric ferries are in Norway, which wants two-thirds of the boats that carry passengers and cars around its coast to be electric by 2030. The country uses a lot of ferries to cross its fjords, and by 2021, plans to have 60 battery or hybrid-powered ones in operation.

Similar to the way that transit buses swiftly are going electric, passenger ferries provide a good use case for batteries because they generally go short distances, start and stop regularly and don't need to go particularly fast. The silent operation, and reduction of diesel fumes, also make the electric ferry experience particularly nicer than the traditional diesel-powered one.

Alas, ferries aren't the real problem with maritime greenhouse gas emissions. That would be all those huge container ships moving the world's goods across the seas.

Alas, ferries aren't the real problem with maritime greenhouse gas emissions. That would be all those huge container ships that are moving the world's goods across the seas and run on heavy crude bunker fuel.

It's unlikely that those ships will use batteries to move across the oceans in the near term, but instead will try to cut emissions using things such as alternative fuels, efficiency measures, slower speeds or even sails.

Until, or unless, the battery gets substantially better and efficiently can move a hulking container ship, passenger ferries are some of the best possibilities to see batteries on the high seas.

In the U.S., the Maid of the Mist company, which ferries people up to Niagra Falls, is working with ABB to deploy two all-electric ferries. Washington State Ferries, which has an extensive ferry business, is adding in hybrid ferries as its ridership and routes grow.

Currently, the biggest barriers to the growth of the electric ferry include the still-high price of batteries, the need for more policies that call for maritime greenhouse gas emissions reductions and the early stage of the market (so a lack of players making these vessels economically). Still, ferries are another area of transportation that will continue to electrify.

One reminder: I'm hosting a webinar June 11 looking at how retailers are trying to decarbonize e-commerce shipping. We'll be looking at how Etsy, IKEA and 3Degrees have been working on this complicated issue. It reminds me of the early days of the Internet companies, such as Facebook, Google and Apple, trying to figure out how to buy clean energy.