Sponsored: Doing more with less has decreased U.S. beef's emission intensity by 29% and total carbon emissions by 30% since 1975

This article is sponsored by National Cattlemen's Beef Association, a contractor to the Beef Checkoff.

Let’s clear the air on something up front. All those "cow farts" you’ve heard about? It’s actually cow burps. Having spent much of my life around cows and conducting research measuring methane emissions from cattle (I’m sure most readers are jealous), I can confirm the vast majority of methane emissions emanating from cattle come out the front end. Also, despite the sensory experience "gassy cows" may evoke, methane itself is an odorless gas.

Methane emissions from cattle get attention because methane is 28 times (PDF) more potent at trapping heat in the atmosphere than carbon dioxide over a 100-year time frame. Additionally, methane from cattle represents nearly half (PDF) of the carbon footprint of U.S. beef when emissions over the entire life cycle, from feed production to the consumer, are considered. However, methane also can be viewed as the necessary tradeoff for the upcycling services that cattle provide.

A key misconception about methane emissions from cattle is how the animal’s diet (PDF) can affect emissions. When cattle eat more forage, or whole plants, that contain a lot of fiber (think grass and hay), they tend to emit more methane gas. Cattle diets that include more grains, like those of most feedlot cattle in the United States, produce fewer methane emissions. In the United States, beef production is a combination of cattle spending about two-thirds of their life grazing and eating mostly forage, followed by the finishing period where cattle are typically housed in a feedlot and fed a grain-based diet (50-85 percent grain).

For example, in Brazil, a country with more cattle than people and the second largest beef producing nation in the world, methane emissions from beef cattle accounted for 21 percent and transportation represented 20 percent of that nation’s greenhouse gas emissions in 2014, according to calculations using the UN FAO’s FAOSTAT database and WRI’s CAIT Climate Data Explorer tool. Globally, the UN FAO has estimated that beef production accounts for 6 percent of global emissions when feed production and land use change impacts are included. When discussing the relative climate impact of beef production, or any other economic activity, it is key to be specific as to what region of the world is being referenced.

Table 1. Greenhouse gas emissions from beef production, agriculture and other emissions sources in the United States for 2016. All data are from the 1990-2016 EPA Inventory of U.S. Greenhouse Gas Emissions and Sinks (PDF) report. 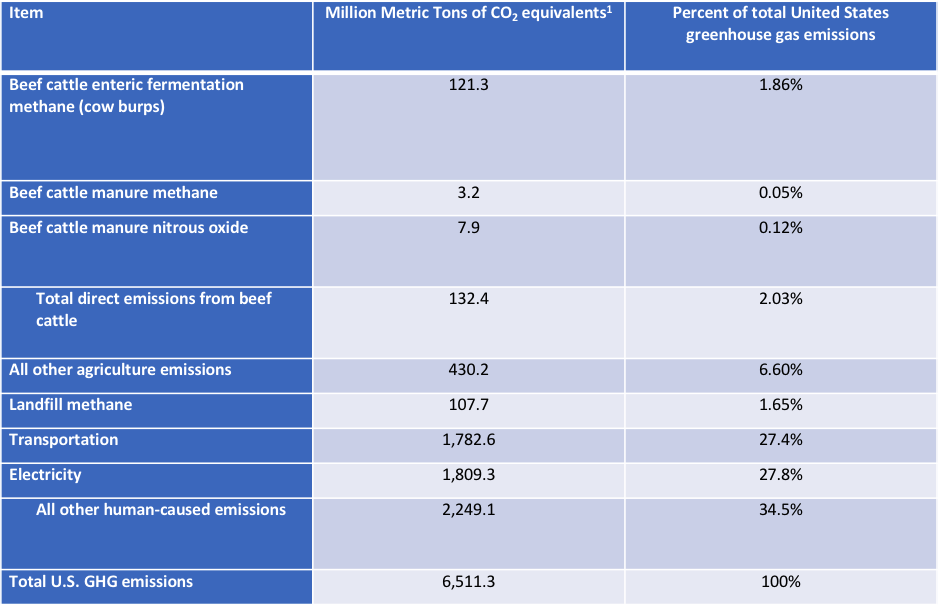 Greenhouse gases have different potentials to trap heat in the atmosphere, thus a system of global warming potentials (GWP) have been developed to compare across gases on a similar time-scale, expressed in carbon dioxide equivalents. The EPA’s report uses the 100-year time horizon GWP of 1 for carbon dioxide (CO2), 25 for methane and 298 for nitrous oxide.

In 1975 there were 132 million beef and dairy cattle in the United States, and we produced 24.9 billion pounds of beef. Fast forward to 2016, we had a beef and dairy cattle herd of 92 million and produced 25.3 billion pounds of beef. Fewer cattle required to produce beef translates into fewer methane emissions, less feed required and less manure generated per pound of beef produced. Doing more with less has decreased U.S. beef’s emission intensity by 29 percent and total carbon emissions by 30 percent since 1975, according to calculations using the UN FAO’s FAOSTAT database. Put another way, we’ve avoided about 2.3 gigatons of CO2 equivalent emissions since 1975 because of efficiency improvements in U.S. beef production (Figure 1). 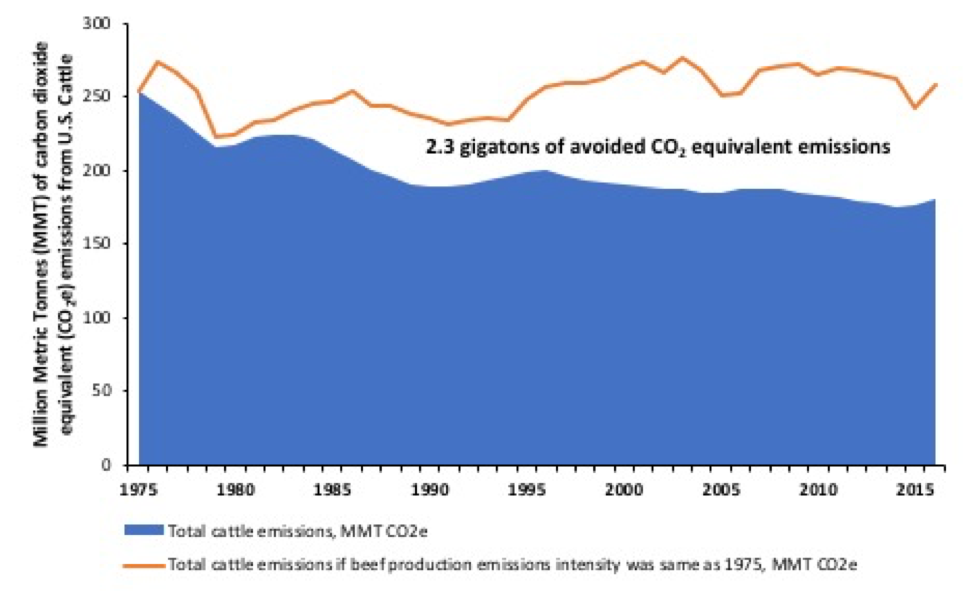 Figure 1. Trends in total greenhouse gas emissions from beef and dairy cattle in the United States from 1975 to 2016 (blue) and calculated total cattle emissions if the emissions intensity of beef remained the same from 1975 to 2016 (orange). The cumulative difference between the two scenarios is 2.3 gigatons of carbon dioxide equivalent emissions. Emissions include enteric fermentation methane and methane and nitrous oxide emissions from cattle manure sources, as reported in the UN FAO’s FAOSTAT database.

While substantial improvements have been made by the people that raise beef, great opportunities to further reduce beef’s emissions remain. Approaches include targeting methane production in the cattle’s digestive system directly with innovative feed additives, using genetic selection techniques to breed for animals or even microbiomes that require less feed for each pound of beef produced, and improving grazing management techniques to enhance carbon sequestration particularly on land that has been degraded (suffered from erosion and decreasing organic matter content).

The men and women that make up the U.S. beef community are serious about their shared responsibility to cut greenhouse gas emissions and do more with less overall. Enhancing productivity will be a key way to achieve further reductions in the United States and holds great promise for global beef production as well.