General Electric and four venture capital partners are offering $200 million to back the best ideas for technology that will speed transformation of the electricity grid into a digital energy network that is smarter, cleaner and more efficient.

GE, which is putting up half the capital for the challenge fund, also took the opportunity to introduce two new smart grid compatible products -- a sleek charging station for electric vehicles and a device to help homeowners manage energy use.

"We believe the digital energy space is going to move fast and big -- we think this is really the key to the future," Immelt said before detailing the challenge fund, which he described as a "call to action and a call for innovation."

Immelt pointed to his company's long history as well as the success of its 5-year-old ecomagination line of 90-plus products -- ranging from household appliances to jet engines, locomotives and turbines -- that deliver high performance and energy efficiency while enabling their users to cut their greenhouse gas emissions. "We want to be known as a company that innovates, but we can't invent everything," he said.

With the Ecomagination Challenge, the largest innovation fund of its kind, GE and its VC partners in the effort seek to "jumpstart new ideas and deploy them on a scale that will modernize the electrical grid around the world," Immelt said.

The challenge works this way:

Companies and individuals have until September 30 to submit proposals for new, original technology that can be applied to creating, connecting or using power. The entry categories are titled:

Participants must be at least 18 years old to enter the challenge. The best proposals will be selected for investment and development of a commercial relationship with GE, and cash awards of $100,000 each will go to the five most innovative and entrepreneurial proposals. 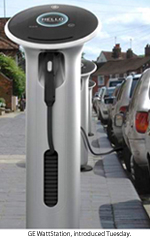 GE and the VC firms will review the entries for investment potential. A committee of industry experts, including Wired magazine Editor-in-Chief Chris Anderson who helped develop the challenge, will also provide input on candidates for possible commercial relationships and select winners of the cash prizes.

While GE has the ultimate say on the outcome, the firm and its challenge fund partners are taking a cue from popular reality TV talent shows and inviting the public to vote on the proposals by logging onto the challenge site at www.ecomagination.com/challenge and clicking on their favorites. The entry with the most user-submitted votes will receive a cash award of $50,000, subject to GE's review.

"I think we'll be shocked about the number of ideas we'll get and where they come from," Ray Lane, managing partner of KPCB, in a media roundtable following the presentation.

Earlier in the day, Lane and his challenge fund colleagues were asked what the investment partners are looking for. "Think about the value chain, from the devices that use energy all the way up to generating energy," he said.

For many entrepreneurs, Lane said, the problem isn't a dearth of ideas, but understanding how to bring good ideas to scale in the marketplace -- which is where the challenge fund can help. "Scale is the key to affordability and deployment," said Steve Fludder, GE's vice president for ecomagination.

Mark Little, GE's senior vice president and director GE Global Research, also offered a suggestion to challenge participants. "I wouldn't be too constrained by what you think GE wants," he said.

GE also introduced two new products today supporting its bid to be an innovation leader in the arena of digital energy: 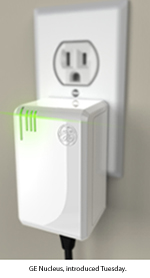 The GE WattStation -- The smart grid compatible charging station designed by Yves Behar, founder of fuseproject, will be pilot tested at Purdue University and the University of California, San Diego, and is expected to be commercially available in 2011. With a commercial price ranging from $3,000 to $7,000, the GE WattStation delivers a faster full charge for electric vehicles, cutting charging time to as little as four to eight hours, compared to 12 to 18 hours. GE plans to introduce a residential version of the device, priced at $1,000 to $1,500, later this year.

The Nucleus -- The home energy management device is designed to help homeowners collect and store information about their household energy use in order to control consumption. Working in conjunction with smart meters and smart appliances in the home, the Nucleus enables users to get a read on overall house energy use and drill down on the energy use of various appliances via PC, laptop or smart phone. The device is expected to hit the consumer market in early 2011 at retail prices ranging from $149 to $199.

For more on GE's strategy to cement a position as a digital energy product leader and an interview with Yves Behar, see GE's Charge Toward the Smart Grid.