General Electric is committing $10 billion to ecomagination research and development in the next five years after reaching a $5 billion investment milestone for its portfolio of environmentally sensitive products, services and technology.

GE, the world's largest industrial company, announced the new goal today with the release of its annual ecomagination report. The 50-page report details the firm's progress in 2009 toward a series of ambitious environmental goals that were set in 2005 -- when the company launched ecomagination -- and include increasingly higher benchmarks for performance.

The report highlights the company's accomplishment of surpassing its goal for ecomagination R&D investment by hitting the $5 billion target in 2009, a year early. The commitment to double the investment in the next five years means that GE plans to put a total of $15 billion toward ecomagination by 2015 when the initiative marks its 10th anniversary.


The company also pledged to maintain its engagement with the public and said it will update ecomagination.com to foster the dialogue.

GE summarized its progress and ongoing goals in this chart: 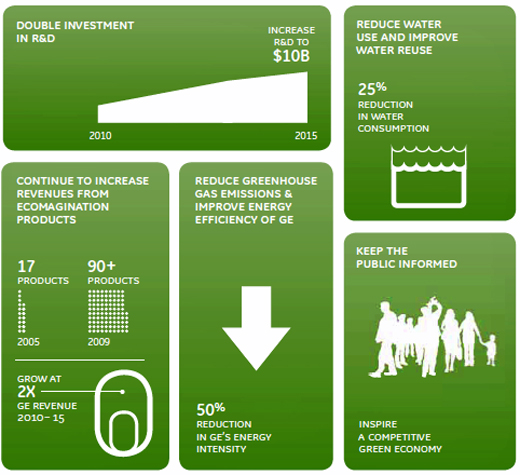 Ecomagination offerings range from energy efficient smart appliances for the home to high-performance engines for industry, and GE investments in projects and technology to generate and save energy span everything from solar power systems to using cow manure to produce biofuel.

In the report today, the company noted:

"Global energy use continues to grow, while interest in renewable energy is at an all-time high. World demand for electricity is expected to double by 2030, driven in part by the increased needs of developing nations."

"Ecomagination is one of our most successful cross-company business initiatives. If counted separately, 2009 ecomagination revenues would equal that of a Fortune 130 company and ecomagination revenue growth equals almost two times the company average," GE Chairman and CEO Jeff Immelt said in a statement. "We have made bold investments in ecomagination research and development and it has resulted in strong returns for shareholders."

The 2009 and previous ecomagination annual reports are available at www.ge.ecomagination.com.html/.