Get set for take-off in electric aircraft, the next transport disruption

Move aside, electric cars; another disruption set to occur in the next decade is being ignored in current Australian transport infrastructure debates: electric aviation. Electric aircraft technology is rapidly developing locally and overseas, with the aim of potentially reducing emissions and operating costs by over 75 percent. Other countries are already planning for 100 percent electric short-haul plane fleets within a couple of decades.

Australia relies heavily on air transport. The country has the most domestic airline seats per person (PDF) in the world. We also have witnessed flight passenger numbers double (PDF) over the past 20 years.

Infrastructure projects are typically planned 20 or more years ahead. This makes it more important than ever that we start to adopt a disruptive lens in planning. It’s time to start accounting for electric aviation if we are to capitalize on its potential economic and environmental benefits.

What can these aircraft do?

There are two main types of electric aircraft: short-haul planes and vertical take-off and landing (VTOL) vehicles, including drones.

The key issue affecting the uptake of electric aircraft is the need to ensure enough battery energy density to support commercial flights. While some major impediments are still to be overcome, we are likely to see short-haul electric flights locally before 2030. Small, two-to-four-seat, electric planes are already flying in Australia today.

A scan of global electric aircraft development suggests rapid advancements are likely over the coming decade. By 2022, nine-seat planes could be doing short-haul flights. Before 2030, small-to-medium 150-seat planes could be flying up to 310 miles. Short-range VTOL aircraft also could become viable in the 2020s.

If these breakthroughs occur, we could see small, commercial, electric aircraft operating on some of Australia’s busiest air routes, including Sydney-Melbourne or Brisbane, as well as opening up new, cost-effective travel routes to and from regional Australia. 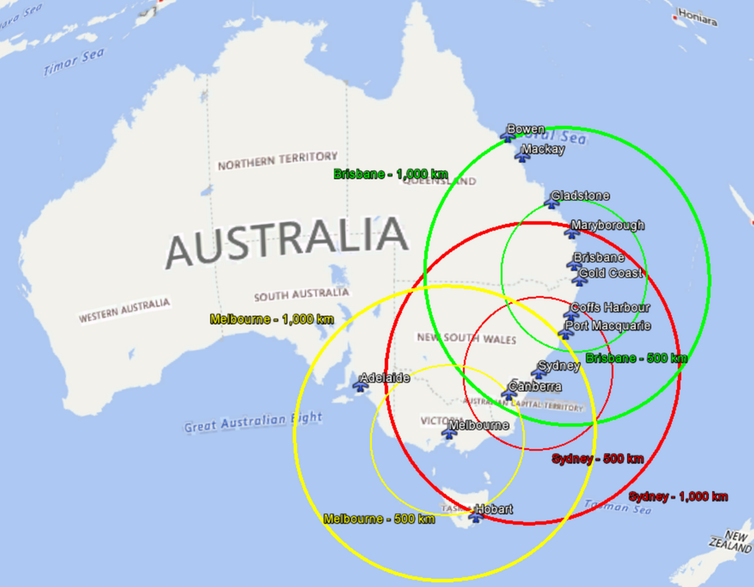 In addition to new export opportunities, as shown by MagniX, electric aviation could greatly reduce the financial and environmental costs of air transport in Australia.

Short-haul electric aircraft are particularly compelling given the inherent energy efficiency, simplicity and longevity of the battery-powered motor and drivetrain. No alternative fuel sources can deliver the same level of savings.

With conventional planes, a high-passenger, high-frequency model comes with a limiting environmental cost of burning fuel. Smaller electric aircraft can avoid the fuel costs and emissions resulting from high-frequency service models. This can lead to increased competition between airlines and between airports, further lowering costs.

What are the implications of this disruption?

While benefiting smaller airports, electric aircraft also could improve the efficiency of some larger constrained airports.

For example, Australia’s largest airport, Sydney Airport, is efficient in both operations and costs (PDF). However, due to noise and pollution, physical and regulatory constraints — mainly aircraft movement caps and a curfew — can lead to congestion. With a significant number of sub-621-mile flights originating from Sydney, low-noise, zero-emission, electric aircraft could overcome some of these constraints, increasing airport efficiency and lowering costs.

The increased availability of short-haul, affordable air travel could actively compete with other transport services, including high-speed rail (HSR). Alternatively, if the planning of HSR projects takes account of electric aviation, these services could improve connectivity at regional rail hubs. This could strengthen the business cases for HSR projects by reducing the number of stops and travel times, and increasing overall network coverage. 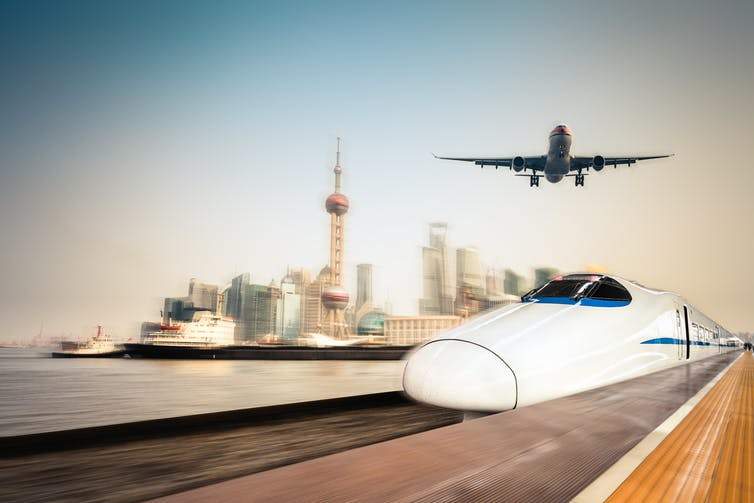 What about air freight?

If properly planned, electric aviation could complement existing freight services, including road, sea and air services. This would reduce the overall cost of transporting high-value goods.

Plan now for the coming disruption

Electric aircraft could significantly disrupt short-haul air transport within the next decade. How quickly will this technology affect conventional infrastructure? It is difficult to say given the many unknown factors. The uncertainties include step-change technologies, such as solid-state batteries, that could radically accelerate the uptake and capabilities of electric aircraft.

What we do know today is that Australia is already struggling with disruptive technological changes in energy, telecommunications and even other transport segments. These challenges highlight the need to start taking account of disruptive technology when planning infrastructure. Where we see billions of dollars being invested in technological transformation, we need to assume disruption is coming.

With electric aircraft we have some time to prepare, so let’s not fall behind the eight-ball again — as has happened with electric cars — and start to plan ahead.

The University of Queensland

Can Air Travel Ever Be Green?