Getting the economic opportunity right on food waste

Now that some heavy hitters — multinational conglomerates, the USDA and EPA, influential think tanks and the U.N. — see tackling food waste as a major humanitarian, financial and environmental imperative, the question remains what to do about it.

After all, food waste happens all along the supply chain, from unharvested crops left to rot on farm fields to food damaged during transportation to aesthetics sorting in wholesale and retail channels to excess preparation at dining halls, restaurants and family dinner tables.

In the U.S., it is essentially a $165 billion logistics, efficiency and consumer education business opportunity — as that is the amount of food produced and wasted in this country each year, according to a research effort called Rethink Food Waste through Economics and Data.

Sodexo, the food services and facilities management company, Deloitte consulting, Mission Point Capital Partners impact investment firm and the Closed Loop Fund have taken it upon themselves to study the economics and data points of food waste in the U.S. and develop a road map for action.

"REFED goals are to create a roadmap for reducing food waste in the United States, for reducing, recycling and recovering" food that would otherwise be wasted, said Sarah Vared, principal at Mission Point Capital who is coordinating the effort.

"The most overarching finding is a lot of investment is needed in this issue, but then again, there are a lot of savings to be realized," she said. 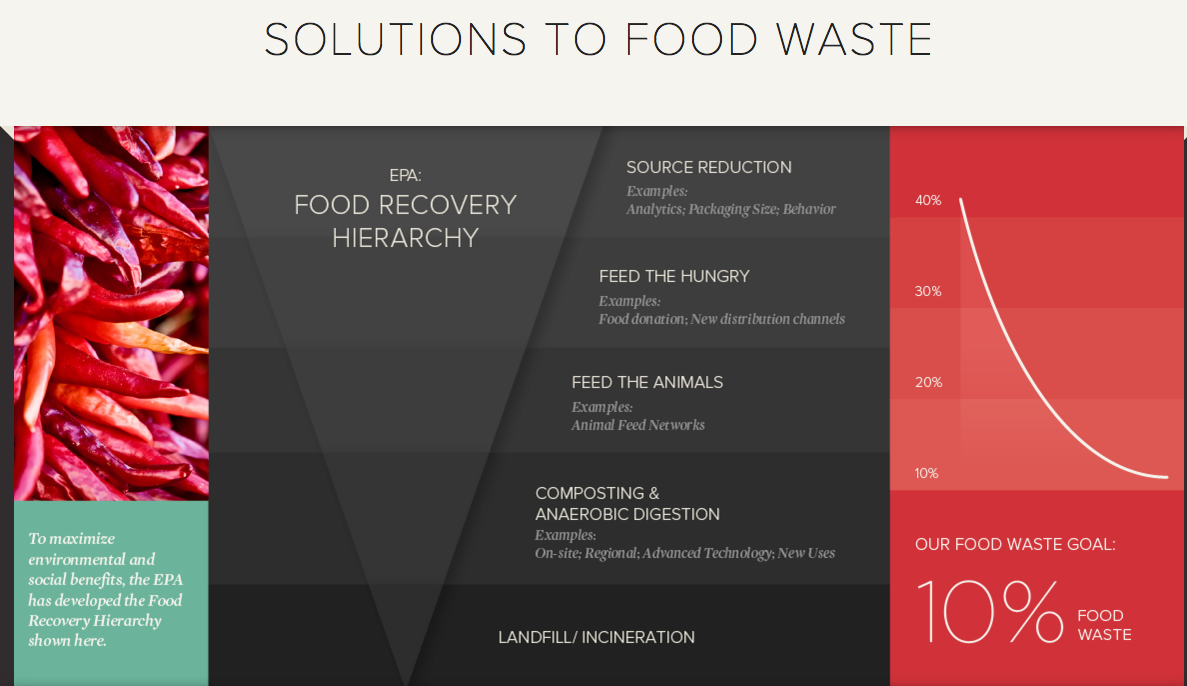 The REFED group plan to release details on the logistical and infrastructure changes needed, investment required and opportunities apparent when it releases its report in early March.

Sodexo, which describes itself as a quality of life services company, providing food servies, faciilties management and other services to some 32,000 clients worldwide, has been honing in on reducing food waste.  In recent years it has committed to share its best practices through the EPA's Food Recovery Challenge.

Now Sodexo sees a collective will emerging around tackling the national and global food waste problems.

"There are several reasons why now is the time" to tackle this, said Christy Cook, Sodexo’s director of sustainability performance and field support. She lists the U.N. Sustainable Development Goals, particularly goal 12 section 3, as elevating the problem as well as the recently launched target by the U.S. Department of Agriculture and Environmental Protection Agency to reduce food waste in half by 2030. "And the Food Recovery Act is currently a rule out in Congress and things are happening in the municipality space around organic bans in landfills."

Globally, $750 billion worth of food and $940 billion in economic activity (PDF) is squandered through waste, according to the U.N., while about millions of people go hungry.

The Rethink project already has provided some quantifying data about the problem in the U.S., available on its website. The dollar value of food thrown away each year in the U.S. is $165 billion. Growing food that is eventually wasted consumes 25 percent of all water used in the U.S. and 31 percent of its cropland. If even just 15 percent of current annual food waste were recovered and delivered to the hungry, 25 million people could be fed.

While the group, speaking on a conference call, were not ready to reveal specifics, the roadmap starts with the premise of three broad places along the supply chain to cut waste — what they described as "reduce, recycle and recover."

The first is reducing production and procurement of food at the outset through better logistics, planning and just-in-time delivery mechanisms. Any wholesale purchasers of food and many retail channels could be involved and benefit here.

The second broad area is recycling food waste. Key to this approach is diverting waste from landfills or collecting it from farm fields and restaurants and to use as feedstock for anaerobic digesters to produce fuel and fertilizers.

The third broad place in the supply chain is after food is prepared but not consumed or likely to be consumed — to recover it or rescue it in time to reroute it to soup kitchens, food pantries, even grocers who do not reject aesthetically different food, such as oval apples or yellow oranges.

Sodexo North America does that through its partnership with the Campus Kitchens project. Working with students on the 134 college campuses where it provides food services, the company and students have recovered excess food from college cafeterias and with it served millions of meals to people in nearby communities, developing logistics and outreach systems to do so.

Elsewhere companies such as Global Green in New York City and Lean Path in Portland, Oregon, have gotten the logistics and infrastructure in line to recover excess food waste and redistribute — before it goes to waste. Global Green works with restaurants in a logistical delivery system that relieves the restaurants of waste issues and provides meals to thousands of people in surrounding communities. Lean Path provides a software platform for organizations to track where food waste happens, a first step toward reduction.

Global Green, which has won awards for its food recovery and distribution programs, figures it saves about 1 million tons of greenhouse gases from entering the atmosphere each year by picking up restaurants' excess food before it becomes food waste sent to landfills.

The most overarching finding is a lot of investment is needed in this issue, but then again, there are a lot of savings to be realized.

REFED aims to answer what investment is required in this country to reduce waste by substantial amounts. "One of the things we’re looking at is what are the resources actually needed, what is needed for businesses to be economically engaged in solutions," Vared said. Investment from government and philanthropic organizations are also needed, in that this is one of those problems where the private and public sectors each need the other to make traction.

According to the U.N. Food and Agriculture Organization, the worldwide problem is $750 billion in producers' lost revenue and something like $940 billion in total economic activity of producing, transporting and preparing food that eventually is wasted.

Sodexo, whose U.S. headquarters is in Maryland, sees the problem as both an economic opportunty and a humanitarian cause.

"Stopping hunger is one of our core beliefs of the company," Cook said.  But as a business Sodexo is always looking for efficiency opportunities. "We are ensuring we are doing everything we can to reduce waste before it happens," she said.