Global Banking Industry Stands to Benefit from Green IT Practices

Although banking is far from top-of-mind when the topic of green IT arises, the financial services sector is the industry with the largest IT footprint, rather than the Googles, Amazons and Microsofts of the world.

Because the energy consumption of the banking sector is so high, with its large-scale global infrastructure and constantly growing demand for storage and near-instant transaction, a new report from Fujitsu lays out just how well the financials services industries in four countries -- the United States, United Kingdom, Australia and India -- have adopted green IT practices.

"Increasingly, IT practitioners are realizing that the general term "Green IT" is about specific areas of operation, and that the key driver is cost. Energy costs, as a proportion of IT budgets, are increasing substantially in most countries," Alison Rowe, Fujitsu's Global Executive Director of Sustainability, writes in the report's introduction. "Green IT is an obvious, and easy, way to improve the bottom line. This paper highlights areas where financial services can achieve this, by concentrating on IT efficiencies."

The findings show that, in all four countries, financial services score just above the average score for all industries, with a score fo 57.3, compared to ICT -- unsurprisingly the most mature industry -- with a an average maturity score of 62.6.

The U.K., which scored higher across all measures than both the average of all industries within the country and among all four countries surveyed, shows how the attention given to IT issues across the board have paid off, and especially within the financial services sector.

The UK has the most stringent carbon reduction and carbon reporting regime of any of the countries, and across all the areas surveyed there is scope for implementing practices and technologies that will further boost performance. The U.K. government in 2009 announced that its at-the-time-fledgling green IT initiatives had already saved £7 million (US$11.5 million) in energy costs.

The figure below lays out how the U.K.'s banking sector compares to the rest. (Click image for full-sized version) 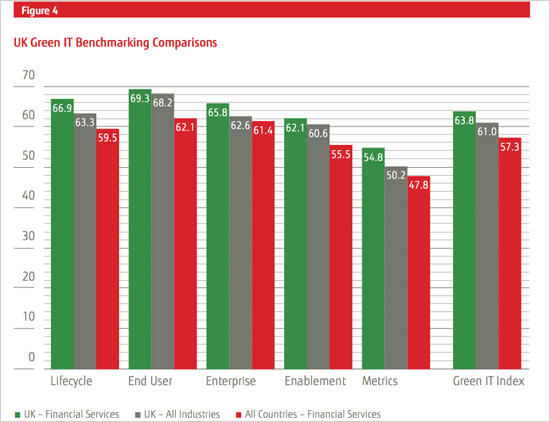 The report's authors write that U.S.'s second-place ranking in the survey is due primarily to its performance in the lifecycle and end-user categories, although the country still has considerable room for improvement.

Across all countries surveyed, the area that could most benefit from improvements is the Metrics category -- measuring how well financial services firms are performing in areas like energy efficiency and greenhouse gas emissions. The recent growth in demand for, and sophistication of, enterprise carbon and energy management software suggests that companies are taking steps to improve their performance in this category.

The full Financial Services Green IT Benchmark report is available for free download from Fujitsu.com.