When finance ministers from the G7, the world's biggest industrial democracies, took up the circular economy in recent months, it became clear the concept has some economic heft.

The G7 deals in economic emergencies.

Given that more than half of all raw material inputs to industry wind up as waste in a year’s time, and given that those inputs are on a trajectory to grow 35 percent in the next 15 years, it’s clearly important: We are going to run out.

"Unsustainable raw materials use," said Mathy Stanislaus, EPA assistant administrator for the Office of Land and Emergency Management, has made materials reuse "an imperative" for global economic players to address. Moreover, about 40 percent of greenhouse gas emissions stem from how materials are managed.

Stanislaus last week hosted G7 officials and executives from about 80 companies to a meeting on "the use of life cycle concepts in supply chain management," the first U.S. meeting on that topic since the G7 countries — the U.S.,  Canada, France, Germany, Italy, Japan and the U.K.  — decided at last summer's summit that addressing "resource efficiency" was a must. Meetings in Germany and Japan ensued.

Stanislaus’ approach, he said in an interview with GreenBiz, was to feature the private sector where some "real leaders" have shown not only the steps involved in planning and carrying out raw material reuse but also that doing so can be a profitable business model.

GM produces "the business case," he said, in its zero waste to landfill aspirations and vast materials reuse program, while Johnson Controls and other U.S. companies have shown how to scale programs.

GM, which churns out some 9.9 million cars a year, has such a sophisticated materials reuse program that 131 of its facilities produce zero waste. That includes 65 of its North American plants.

GM not only reuses its own metal pieces, worn tires and the packaging that arrives wrapped around supplies as source material in manufacturing new cars and trucks, but it is a major power behind the creation of the materials marketplace database whereby industries trade their used or surplus material resources. It's a project of the U.S. Business Council for Sustainable Development.

So, metal from GM's door stamp processes is found in heating and cooling products around the U.S. Its used battery covers are everthing from garden planters to wildlife refuge habitats. 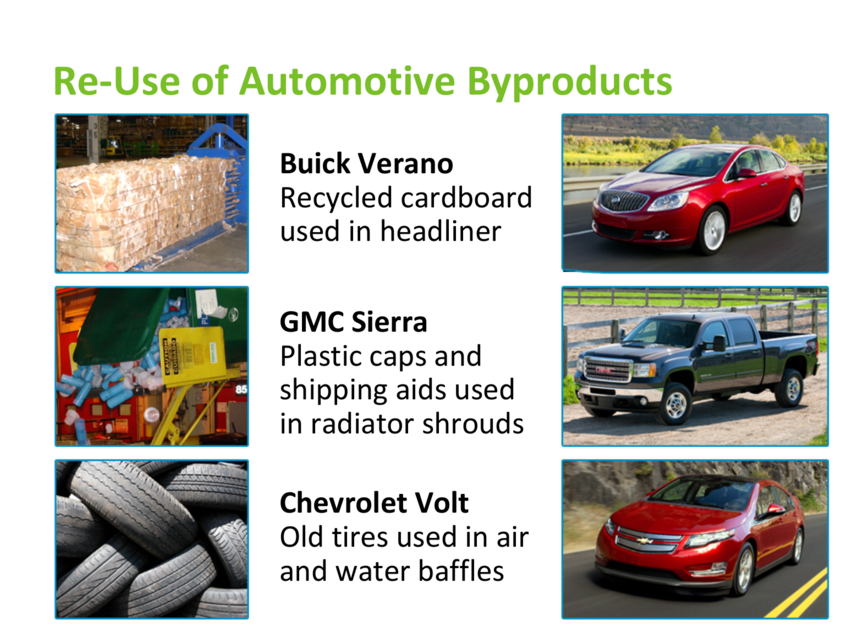 John Bradburn, GM’s global manager of waste reduction, said, "Our landfill-free status is not the finish line. It’s only a significant point in time, enabling more improvements" in the process of creating what he described as a web of resource reuse among companies and its suppliers and customers.

In an email to GreenBiz following the G7 meeting he said the gathering "validated" to him that GM's role or responsibility in sustainable materials management has evolved into something greater than its own zero waste.

He said the consensus among auto industry and supply chain execs was that the next crucial step is to "deploy tools that enable scaling programs" across industries — and continents.

While U.S. and Europe car makers have embraced the materials reuse concept, more needs to be done in Eastern Europe, Asia, Africa and the Middle East.

But an individual company’s work in creating a closed loop with its product is also a worthy topic for teaching wider lessons. Johnson Controls, the largest U.S. supplier of auto batteries for conventional car engines, worked its supply chain, network of sellers and consumers for a decade to get the whole chain to accept a norm of recycling car batteries. Now, Johnson Controls says that 99 percent of its car batteries are returned for reuse.

Adam Muellerweiss, the company's global director of sustainability and environmental affairs, said they had to work at it step by step — going back to the design stage.

He said Johnson Controls found it had to start the process "around the design of the product and the materials that are used — the choice of those materials.  And then there’s the importance of informed consumers."

Johnson's program prevents the leaching of toxic materials into landfills in that it captures lead and polypropylene in its recycling process.

As he listened to the G7 presentations, Muellerweiss said he grew alarmed at the larger picture of what is happening, particularly that growth of raw material use is outpacing population growth and GDP growth.

As its rationale for taking up resource efficiency, the G7 warned "the consumption of natural resources and production of waste have increased to a greater scale than ever before" in a document about its 2015 decisions.

Global raw material use rose during the 20th century at about twice the rate of population growth.

It added, "Data indicate that global raw material use rose during the 20th century at about twice the rate of population growth. For every 1 percent increase in GDP, raw material use has risen by 0.4 percent."

Some companies talked specifically about how that decoupling can be done. Ford Motor Co. has been on a campaign to reduce its water and energy use and its carbon dioxide emissions while still growing earnings by 9 percent a year and growing revenues.

In its 2012-2013 fiscal year, Ford saved $7 million just through switching lighting in its own operations to LED bulbs.

At the G7 meeting, Ford announced an effort to expand its environmental and resource conservation goals down its supply chain, unveiling what it calls its Partnership for a Cleaner Environment.

Working with 25 suppliers representing 800 manufacturing plants in 40 countries, Ford's Partnership will share with these suppliers what it considers best practices around reducing water, energy and carbon dioxide as well as materials reuse.

Mary Wroten, Ford's senior manager of supply chain sustainability who presented at the G7 meeting, said that by sharing what it has discovered works in-house with its legions of suppliers, Ford is able to multiply the reductions in water and energy use and GHG emissions.

“Climate is not a competitive space, and more that we can talk about this and share what we are doing, a stronger planet we can create,” Wroten said in an interview.

Its PACE program provides a software tool to suppliers, she said. With it, suppliers can set a target, say on water use reduction, and the tool offers potential practices from what Ford has found to be its best practices.

Because of this program and other policies, Ford was named to the 2016 Ethisphere Institute's List of the World’s Most Ethical Companies.

Suppliers can manage up, as it were, in sustainably managing raw materials and that is what Gage Products Co. is doing. The company, which supplies Ford, GM, FCA (formerly Chrysler Group) and other automakers, remanufactures auto solvents and fluids by reclaiming solvent materials from automakers' operations and filtering them. It has reclaimed over 100 million gallons of solvent materials to date, it told the G7.

Suppliers Partnership for the Environment is an industry group of auto parts suppliers that has been pursuing materials reuse and paring down the auto industry's need for raw materials.

In one full circle example, the group orchestrated the use of auto manufacturing trim scraps to use as filler in absorbent booms which in turn were used to capture the oil that spilled in the Gulf of Mexico — oil extracted by BT to produce fuel for to cars.

Steve Hellem, executive director of the Suppliers Partnership for the Environment, said in an interview that there's actually much to be optimistic about at the moment because most manufacturers get the need to reduce raw materials use.

That is particularly true in the once beleaguered auto industry as it has remade itself from the brink of collapse it faced during the economic recession and has had to win back consumers. One way they've approached this is by trying to be more environmentally responsible as well as growing mobility businesses rather than only selling new cars.