General Motors (GM), one of the world’s largest automotive companies, is bringing new energy to Detroit these days — literally. Just a week after the presidential election this year, more than 200 renewable market participants gathered at GM’s headquarters in Detroit, Michigan, for the Business Renewables Center’s (BRC’s) biannual conference to discuss the current state of the corporate renewable energy market and how to accelerate the adoption of renewables by companies globally.

At the same time, as part of its commitment to go 100 percent renewable energy by 2050, GM announced its largest energy purchase to date — 50 MW of Texas wind power. GM, a BRC member, is just one of many Fortune 1000 businesses dedicated to renewables today.

The crowd consisted of corporate and non-utility buyers interested in making connections and learning best practices, along with developers and service providers who want to keep a finger on the pulse of the market. Conference attendees represented 87 percent of the megawatts announced by corporates thus far in 2016. The two-day event allowed market players to tackle the real issues facing the market today.

While the uncertainty of the extension of the Investment Tax Credit (ITC) and Production Tax Credit caused a rush of projects at the end of 2015, this year has shown a return to the steadier growth seen in 2010 through 2014. So far in 2016, over 1.5 GW of deals have been signed by 13 corporate buyers, half of which are signing their first offsite renewable power purchase agreement (PPA). Eight new developers are also entering the corporate renewable market for the first time. This is substantial growth in both megawatts and number of parties involved over 2014, and about a week still remains in the year. 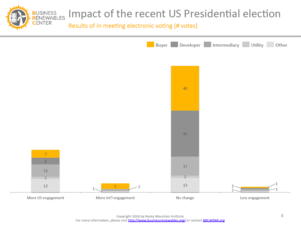 The potential effects of a new administration on the market was a hot topic. Attendees sent a strong signal early on that their renewable energy strategy and goals would not change: 67 percent stated that the election has no impact on their renewable engagements in the U.S., while 25 percent said that it actually will increase their engagement.

Furthermore, as of November, 45 percent of Fortune 500 companies have stated sustainability goals. GM is one of those companies, announcing an impressive goal to procure 100 percent renewable energy for its operations worldwide by 2050. Rob Threlkeld, GM global manager of renewable energy, affirmed the company’s commitment to this goal, stating that GM is "helping transform the way electricity is produced, distributed and consumed around the world" and "investing in Texas wind energy is an important step on [our] journey." As the future of federal policies on energy and climate change remains murky, it is inspiring to see that over 220 highly influential companies are dedicated to expanding and accelerating the adoption of renewables.

GM is ... announcing an impressive goal to procure 100 percent renewable energy for its operations worldwide by 2050.

What needs to happen

While a wide range of issues, barriers and potential solutions were discussed in Detroit, four key themes emerged:

Here are some insights into each of these, coming out of the Detroit conference.

As the U.S. corporate renewables market exits its nascent stage, lessons learned by market leaders such as Amazon, Microsoft, Walmart, Equinix and General Motors provide valuable insight for new buyers. BRC members represent 94 percent of corporate PPAs in the U.S. and Mexico to date; by convening that brain power, we are able to help the next wave of corporations undertaking renewable energy PPAs to reduce project timelines and transaction costs.

In Detroit, the BRC held two Energy Market Fundamentals sessions during which buyers were able to ask and answer questions from their peers. The focus of these sessions was to educate new buyers on how electricity markets work and the mechanics of a power purchase agreement.

Service providers also have played a role by informing the BRC tools such as the recently released Term Sheet and RFP template. An upcoming opportunity for putting these tools and this knowledge to use will be the second Buyer’s Bootcamp II, coming up soon in Aspen, Colorado, which will bring together new buyers with experienced "faculty" in an intensive introductory course. Increasing collaboration and transparency between buyers, developers and service providers will continue to exponentially accelerate the growth of the corporate renewable energy market.

A key outcome of the conference was the call for a "Corporate Road Map" to codify and organize much of the shared knowledge discussed above. Many buyers, both new and experienced, shared frustrations on how to navigate the project development and internal approvals process, as well as cataloging all the resources available to them. BRC members proposed to create a timeline for key steps in the approvals process, and when to engage internal departments and external consultants by harvesting best practices from experienced buyers. BRC’s database, products and primers also will be integrated into this road map, so that all buyers efficiently can determine where they are in the process, and what materials they have to assist them.

Opening up the aggregation market

One major challenge voiced at the conference was how to expand the market to accommodate different sizes and types of companies. The leading solution is aggregation — pooling the load requirements of multiple, smaller companies to buy the electricity from one off-site, utility scale project. The average renewable energy project size of 100 MW alienates a large portion of the addressable market that does not have the appetite to contract for an entire project of that size. Right now, the lack of past examples and the difficulty of convening a group of like-minded buyers who have the same goals and will accept the same deal terms make it difficult to bring these smaller companies together to sign a PPA.

A few cases of aggregated deals exist, but for the most part developers, buyers and financiers alike are defining their own path and learning as they go. This increases the complexity and the time it takes to complete a transaction and discourages new buyers who are still grappling with the fundamentals. While we discussed many specific solutions to this issue, the overarching ideas coming out of Detroit included: creating a knowledge base of what deals have been completed; and creating a working group for market players specifically interested in aggregation deals to disseminate this information.

The second hurdle is efficiently grouping buyers to complete such deals. Differences such as geographic load profile and shape, ability to take on certain risks, creditworthiness and desired term length are just a few factors facing a potential syndicate of buyers. Attendees of the conference from different sectors felt strongly that a platform or process by which buyers easily can identify commonalities would be the most efficient way to tackle this problem. This information will help the buyers create a self-built community before the transaction stage that will encourage trust and decrease the transaction timeline. This idea gained a lot of traction — a group of more than 15 buyers wants to take part in the first replicable aggregation model.

Many corporate buyers in attendance expressed interest in procuring renewables for their loads outside of the U.S., but cited lack of knowledge and information as reasons why they have not done so already. Information as simple as where deals are even possible is scarce, and that causes most companies to focus on the markets that they are already familiar with.

Similarly to the market for aggregated deals, many international markets, such as Vietnam, Kenya or China, are in very early stages and therefore have limited historical data. In more advanced markets such as India or Mexico, there are further issues such as increased regulatory risk. If a U.S.-based company is unfamiliar with current energy policies or uncertain of policy stability, it can be very difficult to stimulate investment activity.

Similarly to expanding the aggregated renewable market, the first step to breaking open international markets is compilation and circulation of information. The BRC Marketplace provides a platform that connects buyers and developers worldwide. Developers can post their open or prospective projects and buyers can submit a Request for Information on projects in specific countries. Insight into which countries are intriguing to buyers as well as where developers are already headed will catalyze movement into international markets.

Next steps for the BRC

The market has continued to grow at a steady pace and corporate buyers are more determined than ever to fulfill their commitments to sustainability. Coming out of the conference, educating buyers who are new to the community and opening up new market sectors are the most important steps to accelerate the renewable energy transition.

Want to learn about aggregated energy deals? A university lesson