GMOs and Organics: Why Can't They Get Along?

What I'm struck by is the not just the discussion about what all agree is the big issue -- how to feed a global population that will grow to 9 billion by 2050 -- but persistent confusion about underlying facts, evidence and science. 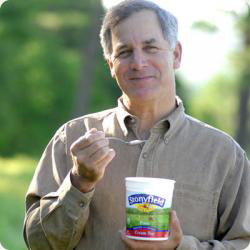 Particularly around the issue of genetically modified organisms, which may -- or may not be -- the key to driving agricultural productivity, there's confusion as well as disagreement. It surfaced during a panel on sustainable agriculture that featured, among others, Gary Hirshberg, the ce-YO of Stonyfield Farm, and Nina Federoff, a molecular biologist and president of the American Association for the Advancement of Science.

Hirshberg called organic agriculture -- which excludes GMOs -- a win-win-win-win-win for farmers, farm workers, consumers, the environment and, of course, businesses like Stonyfield. He started the company in 1983 when "very few Americans were eating yogurt and no one knew what organic was. We had a great business idea. Just no supply and no demand." That's changed, of course. Organic food is a $30 billion business in the U.S. Stonyfield is part of global giant Group Danone. It buys from about 1,750 dairy farmers who are paid a premium of 40 to 60% for their organic milk, he said.

Even better, he said, Stonyfield supports 40,000 of organic sugar cane production in Brazil where, instead of burning sugar cane fields before the harvest, a wasteful practice that generates global warming pollution, his growers return the green matter to the soil. Their costs are no higher than those of conventional growers.

But can organics feed the world? Not until they incorporate the practices of "modern agriculture," including genetically modified crops, said Federoff, who is the author (with science writer Nancy Marie Brown) of Mendel in the Kitchen: A Scientist's View of Genetically Modified Food. Using modern technology to genetically modify crops doesn't differ meaningfully from traditional cross breeding, she said:. "In the 20th century and before, we have completely transformed plants and animals to serve as better food sources."

Yet fears of genetically modified crops has led to overregulation and limited their adoption, she said. "That's a terrible tragedy," she said. In the U.S., only a few commodity crops -- corn, soybeans and alfalfa -- are big enough to justify the development of transgenic varieties. The result, she said, is that new varieties of specialty crops, i.e., fruits and vegetables, that protect them from diseases and pests aren't in the market.

Herbicide-resistant crops, she explained, allow farmers to spray herbicides after the crops are established. They don't have to till the soil, allowing carbon to be sequestered. "If we can't use modern science to improve productivity, I think we're not going to make it," she said.

Hirshberg disagreed, saying the benefits of genetically modified crops have been oversold. The seeds cost farmers more, threatening their livelihood. "It's a national security issue, keeping farmers profitable," he said. GMOs have led to "an explosion of superweeds" that resist herbicides. "GMOs might be a solution to long-term sustainability, but we don't know yet that it is," he said.

Federoff replied that "there are lots of inaccuracies" in his description of GMOs and their impact, and that "farmers aren't dumb" and wouldn't pay more for seeds unless they were getting more value from them. No one forces farmers to plants genetically modified crops.

And so on. Maybe Corby Kummer, the Atlantic food writer who moderated the panel, can try to settle the argument in his excellent blog.

Or maybe it shouldn't be so complicated. One tough issue in organic vs. GMO debate -- the possible contamination of organic foods by transgenic crops -- clearly needs government attention. Organic farmers have the right to be protected from contamination by buffer zones, regulation, tort suits, whatever.

Otherwise, though, there's no reason why genetically modified crops and organics can't live side by side -- or even better, complement one another. (See my blog post Biotech and organic food: a love story.) We've been eating GMO crops for well over a decade, with no demonstrable ill effects. Labeling of foods that contain GMOs -- which the biotech industry opposed -- would be a step forward, because it would enable those who want to avoid GMOs to do so. Some may be willing to pay more for GMO-free foods, just as some are now willing to pay more for organics.

Beyond that, why not let farmers decide what crops they want to plant? They're the real experts, in the end. And they'll have to live with their choices.

[Disclosure, and a final thought: I'm moderating a food & farm policy conference in Washington on May 12 for Croplife America, a trade association whose member include companies that make GMO seeds. We'll hear a variety of viewpoints on this, and other issues. You can register here.]