Late last year, General Motors delivered the first models of its new Chevy Bolt, the electric car with a 238-mile range and $30,000 post-rebate price tag that some say could make GM a serious rival for Tesla in the pursuit of mass-market EVs.

Now, GM technology spinoff Maven has forged a partnership with ridesharing giant Lyft — backed by more than $500 million from GM — to get more Bolts on the road by supplying the car to drivers in Los Angeles. Also in play is Maven's own app-based carsharing system, which executives say they hope could allay lingering consumer skepticism about going electric.

The initiatives could help make electric powertrains a more common option under the on-demand transportation services that have changed the calculus for driving in cities.

"We’re co-creating a modern, accessible mega city," Maven CTO Paul Pebbles told me, referring to the partnership with Lyft and the city of Los Angeles. "That’s a really good place to test out these concepts."

Analysts such as McKinsey say that we are at a tipping point, where macro-trends such as declining personal car ownership rates are colliding with electrification, connectivity and existing public transit systems. Longer-term, emerging technologies such as self-driving cars are expected to continue changing the playing field. 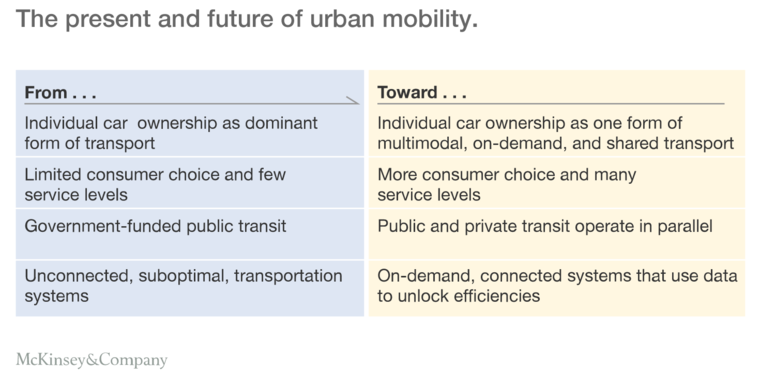 Of course, Maven and Lyft aren't the only companies looking to get ahead of the fast-moving transportation tech landscape.

Other players such as Moovel, the mobility offshoot of Mercedes-Benz parent company Daimler, are also pursuing new types of carsharing and ridesharing arrangements. Then there are the startups that helped catalyze the shift to shared transportation in the first place, such as ZipCar, Uber and Car2Go.

The initial selling points for shared mobility were tech-enabled features with obvious consumer appeal, like not having to park, replacing taxi cash fares with mobile payments, and much faster and more convenient service than traditional car rental companies. For city planners and environmentalists, though, the question has been what the rise of car rentals by smartphone means for traffic and related carbon emissions goals.

In notoriously gridlocked Los Angeles, for instance, the city aims to get 100,000 cars off the road by 2020; does that goal get easier or harder to reach with people hailing different types of private rides? It's an area only starting to be studied.

The big question  is which companies will be able to gain a foothold in the fast-moving mobility sector, and how cities and their residents may be affected as a result.

"We think we’re still really in the early days," Pebbles said. "We are learning an enormous amount."

For Maven, launched by GM in January 2016, the new partnership with Lyft's Express Drive rental program for ridesharing drivers may be a way to introduce more consumers to a new generation of EVs like the Bolt without the commitment of buying one themselves.

"In terms of range anxiety, that’s why we’re trying some of these things out," Pebbles said. "We provide the vehicles, the reservation system, the billing — a whole bunch of functions to be able to really help Lyft get more drivers on the road. It’s been very beneficial for us." 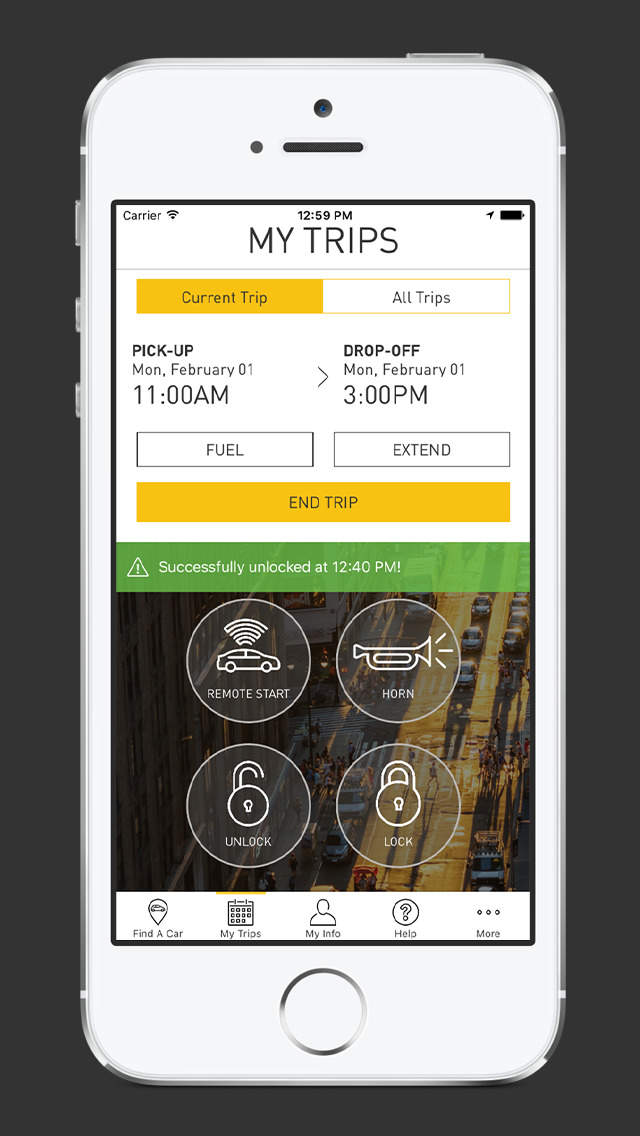 Maven
<p>A screenshot from the Maven app, which shows how carsharing customers can control the cars through their phones.</p>

Aside from introducing more Bolts to the Lyft fleet, there is also Maven's own carsharing platform to keep in mind.

The company's proprietary technology revolves around an app that lets members, who pay set per-rental rates, reserve, pay for and even unlock shared cars with their phone. The offering has been honed over the last year at Maven's office at GM corporate headquarters near Detroit, with the help of engineers at corporate R&D facilities and talent netted from acquisitions such as failed ridesharing business Sidecar.

"The entire experience is through the app," Pebbles said. "I can make a reservation, walk up to the car, use the Bluetooth to talk to the car, unlock the door and drive."

Including Los Angeles, Maven operates in 17 large and midsize cities, including Detroit, Denver, Nashville, Atlanta, Washington, D.C., and Jersey City, N.J. The company has signed up more than 24,000 members who have made more than 27,500 reservations, according to a press release.

Although the emissions-reduction potential of EVs alone is immense, one big question about the future of electrification is how the field might converge with autonomous vehicles (AVs). Analysts are divided on whether driverless cars are more likely to ease or add to traffic congestion, but air pollution obviously could be slashed with the introduction of electric engines.

"Without significant deployment and penetration of EVs, car sharing and supportive regulations, the advent of AVs will not, by itself, be sufficient to solve urban air pollution and congestion problems," the McKinsey report authors note. "Also, the convenience of driverless cars might increase vehicle miles traveled."

Longer term, a Maven statement said the company does aim to work with cities to build "a fully electric autonomous network of vehicles tied to mass transportation stations." Those efforts could start as soon as 2018, according to a Reuters report.

“If you talk about carsharing and ridesharing, I think the longer view of the world is as (autonomous vehicles) and other technologies come along, these are all building blocks," Pebbles said.

L.A. aims for the future of urban mobility with... Xerox?