<p>In this exclusive for GreenBiz, Covalence EthicalQuote rings up the companies and industries that grabbed headlines in 2013, for better or worse.&nbsp;</p>

Such was the finding of Covalence EthicalQuote, a reputation index tracking 2,800 of the world's largest companies on environmental, social and governance (ESG) factors, as well as on CSR, ethics and sustainability. Covalence shares the data it culls with clients such as IBM, Johnson & Johnson and Gap. Now, the company is exclusively divulging its year-end findings and charts with GreenBiz readers.

Based in Geneva, Switzerland, Covalence EthicalQuote aggregates thousands of articles gathered online. Then, using an international team of analysts, it classifies the coverage according to 50 criteria inspired by the Global Reporting Initiative. These include water management, pollution, biodiversity, product safety, emissions and waste management.

"This information should help make business leaders understand that reputation is especially important when it comes to ethics and sustainability," said Antoine Mach, Covalence EthicalQuote's managing partner and cofounder. "As real sustainability performance is very difficult to measure in a standard, objective way, reputation is a proxy of such performance. Also, reputation is a vector of the return on investment of sustainability programs: Doing green things is good in itself, but if the company's stakeholders aren't aware of such good things, they won't reward the company, which itself won't be motivated to do more."

From Google's news dominance to the automobile industry's steady rise in favorability, here are some of EthicalQuote's key findings from January through November of 2013 — and what you can learn from the results.

The 20 companies below garnered the greatest number of headlines pertaining to sustainability and ethics in the 2013 assessment. For those that earned mostly positive headlines, making this list is good news; for those often called out for malfeasance, it can be a wake-up call for change.

While Covalence didn't specifically differentiate between positive and negative coverage, it's not hard to draw a qualitative line in the sand.

The leader, Google, for example, had a banner year in sustainability. In 2013, it launched ambitious solar initiatives, jumped on the sustainability crowdsourcing bandwagon and joined forces with the likes of Al Gore to explore the greening of the Internet. Ditto tech giant Facebook, which nabbed headlines for several data center-related initiatives, and Microsoft, which made significant strides in the areas of carbon pricing and offsets as well as energy-efficient buildings. (That said, not all coverage related to these companies was favorable. Both Facebook and Google, for instance, came under fire for problematic relationships with climate change deniers.)

On the flipside, a handful of companies on the list garnered headlines with a more critical edge. Chevron, for example, made the news when shareholders pressured it to be more transparent about climate risks. Others received more divided coverage, such as Bank of America, commended for a U.K. effort to cut down on waste but also criticized for supporting coal.

Perhaps the most interesting entry on the list is Wal-Mart. It has not traditionally been thought of as a green leader, but it made notable and bold advances this year, ranging from introducing safer chemicals in products to leading the carbon pricing charge — proving that it's never too late to shift focus and public image.

The index's analysis of industries yielded similarly telling findings. In this case, Covalence did factor in positive and negative qualifications, using a naïve Bayesian classifier trained on 12 years of human-coded data, as well as human analysts to verify the sentiments.

The heat map below reveals the industries with mostly positive (greens) and negative (reds and pinks) media traction in 2013:

(The size of boxes represents the volume of information. The color indicates the ratio of positive news / total news from 0 to 100 percent)

This data emphasizes the importance of industry-wide communication efforts based on clear reporting and metrics.

"It's surprising to see the automobile industry is leading the ranking, while energy is last — after all, most cars still rely on oil," noted Mach. "The difference is that automobile companies communicate a lot about greener cars, while the energy sector has difficulties showing its positive impacts."

Indeed, the automotive industry has done an exemplary job of communicating sustainability efforts to the public, particularly regarding the rise of electric and alt-fuel vehicles. Conversely, energy companies have struggled to distance themselves from negative news events such as oil spills.

Banking, another sector often perceived negatively, similarly has floundered in its reputation-brandishing efforts.

"Automobile companies can improve products (greener cars make the news), as can F&B companies (which can tout, for example, less salt, sugar and fat or the responsible sourcing of raw materials)," Mach said. "But banks don't communicate a lot about their sustainable products, while facing many controversies."

Interestingly, the Automobiles & Components and Food, Beverage & Tobacco sectors — already the most favorably viewed in 2009 — also have experienced steady upticks in favorability over time. On the other hand, the Energy and Banks sectors — already low on the list — have slipped precipitously, as the chart below shows. 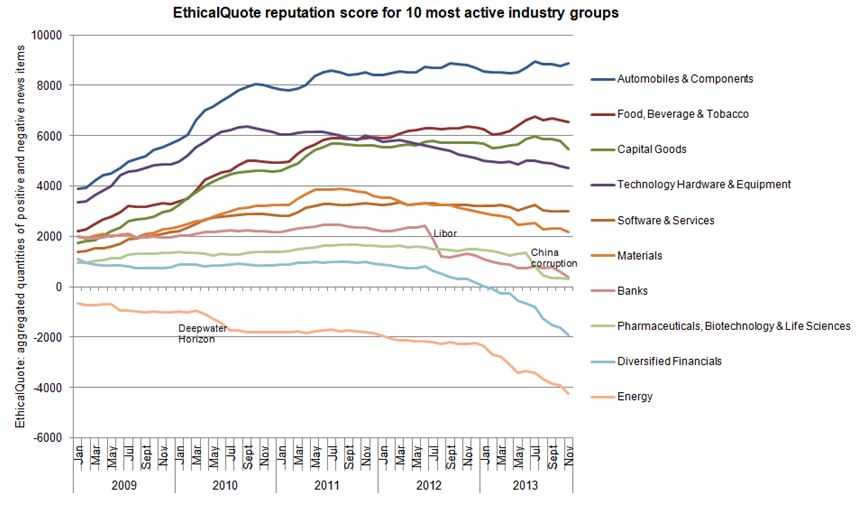 Surprises, takeaways and what's ahead

Negative coverage, though, also has amped up — although Mach says this too can be seen as a progressive development. "Over the last two years, there has been a sensible growth of negative comments in ESG-related news: more and more controversies, affairs and scandals are making noise," she said. "It may be that governments have adopted stronger regulations and are now punishing faulty companies more strongly (see recent fines relating to the Libor scandal). It seems societies are becoming less tolerant of business malpractices, perhaps in response to the 2007-2008 financial crisis."

For companies with positive news to share, the imperative is clear: It's time to grab the megaphone.

"Companies doing green/sustainable things should communicate about it and find external relays, so that stakeholders, the media and the public are aware of it and have an improved perception of them," Mach said. "This will then be rewarded through better relations with customers, consumers, regulators, investors, employees and future employees, as well as communities."

Top image of Google Doodles from 2013