Google redefines what it means to be '100% renewable'

The company's new carbon-intelligent software can switch loads between its data centers depending on the availability of clean power.

This week, Google announced the launch of a new technology designed to shift the electricity demands of its largest data centers to match clean energy supply. Never one to shy away from buzzwords, Google is calling this a "carbon-intelligent computing platform."

Developed by a small team of smarty-pants Google engineers, the technology schedules non-urgent computing tasks to correspond with when renewables are plentiful.

Using renewable forecasting data from Danish startup Tomorrow, a Google data center would plan computing tasks that are somewhat flexible — such as creating new filters for Google Photos or processing YouTube videos — for when renewables are plentiful and cheap. Meanwhile, the services people want on demand — such as accessing Maps, watching YouTube videos and generating search results — would continue to be powered around the clock. 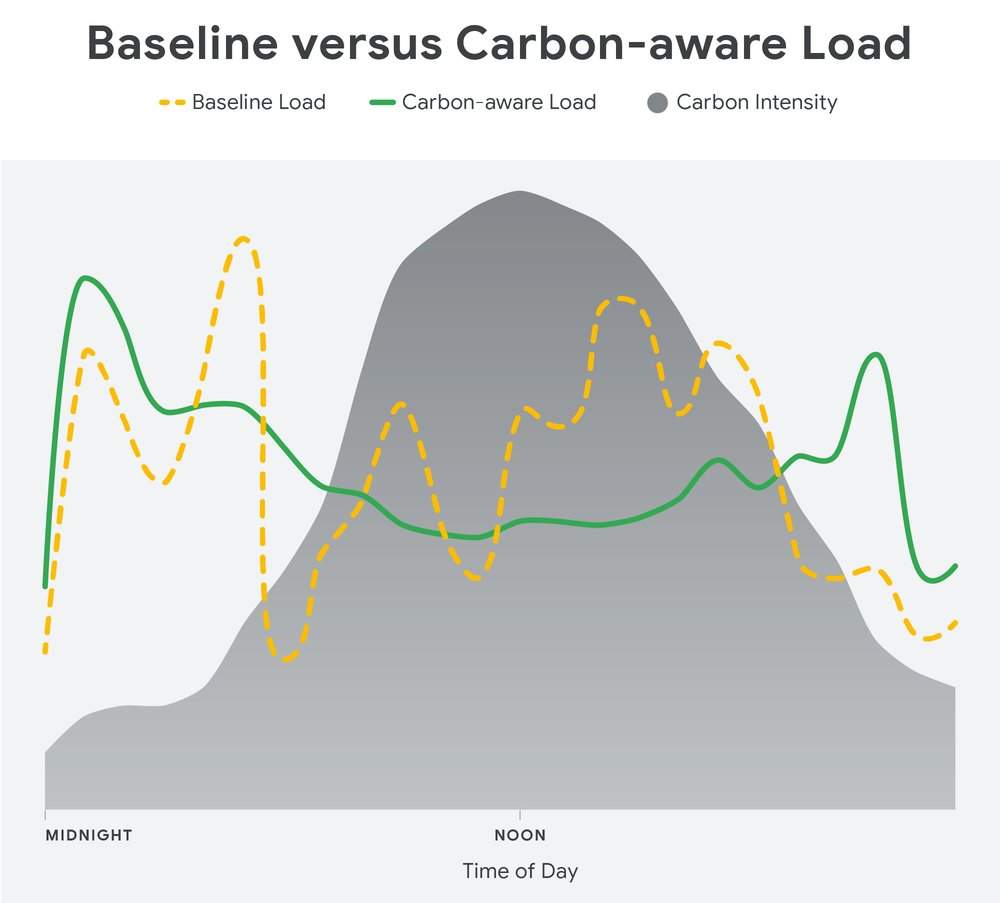 While hundreds of companies have committed to 100 percent renewable energy for their operations, that is based on annual electricity consumption. It doesn’t take into account what time of day — or even what season — the energy is generated.

The all-in-on-renewables strategy should be credited with bringing clean power into the mainstream, but it never will decarbonize energy completely. The next frontier is figuring out how to match supply with demand in real time.

If successful, Google’s new software will shift its own computing loads to better match its low-carbon electricity supply.

Data centers are energy hogs, using about 3 percent of all electricity in the United States, with energy traffic growing every year. They’re expected to be one of the major sources of growth in demand for electricity in the coming decade (according to Schneider Electric).

Data centers’ energy demands have a rather consistent baseload. They need to run all day and night, with relatively little fluctuation when compared to residential or commercial electricity consumption.

By bifurcating out non-urgent computing activities, Google’s new platform is looking at data centers’ ability to be flexible in an innovative way — one that could be important with data farms gobbling up more energy.

Google isn’t the only company thinking about this. Lancium, a technology startup, has a vision to create "Pausable Data Centers" that provide a higher level of grid flexibility. The company also projects cost savings by shifting loads to times with plentiful ultra-low-cost wind power.

Google wrote the book on 24x7 carbon-free energy — or, rather, the white paper — which popularized the idea in 2018. But it isn’t working on the problem alone.

Last year, Microsoft and Vattenfall began a pilot program that offered customers in Sweden the ability to match its power with renewables — solar, wind and hydro — on an hour-by-hour basis. The power matching uses smart meters that measure real-time energy consumption and offers guarantees of origin that verify the electricity is from a renewable source.

Google is also exploring energy storage to reach around-the-clock carbon-free energy. In January, it entered a PPA with the utility NV Energy that included 250 and 280 megawatts of storage to power a new data center in Nevada.

Tools to reach clean energy all day, every day

There isn’t a silver bullet to reach 24/7 clean energy goals. Solutions will include a combination of technologies that change our consumption habits and demands, and shift when clean energy is available.

Here are a few options in companies’ toolbox to get clean energy where and when it’s needed:

Energy storage — technologies that save clean energy for when it’s needed. This is the most obvious solution but currently too costly to deploy at scale.

Load shifting — moving electricity consumption from one time to another. Why not just do things when renewables are plentiful?

Flexible demand — reducing demand in periods of peak load. This could shift energy use to another time (load shifting) or just reduce energy consumption when electricity is dirty (or expensive).

Complementary renewable sources — diversifying clean energy resources to decrease the amount of time there are lulls in electricity generation.

Curtailment — overbuilding clean energy resources for deeper renewable penetration and reducing energy delivery when supply outstrips demand. This is a cheaper option than energy storage in many situations.

Energy experts have expressed concern (PDF) about how around-the-clock carbon-free electricity could push up the cost of renewables, especially as electricity demand increases with the electrification of buildings, vehicles and data centers.

While these concerns are well-researched, it is worth noting that most innovations in energy look impossible when looking at historical data. The speed and scale of clean energy disruption are consistently outpacing predication, leaving room for innovators, such as Microsoft and Google, to find new ways to do what we thought was impossible.