Google Says Energy Innovation Will Pay Off -- but When?

The folks at Google, not surprisingly, have enormous faith in the power of technology. So a group of them set out to see what technology breakthroughs in clean energy will mean to the economy, the environment and the typical American household.

They found good and bad news.

Specifically, as Bill Weihl and Charles Baron write on the Google blog, here are the benefits of energy breakthroughs, when compared with a business as usual scenario. In their parentheses is even better news; those numbers reflect what clean energy technology can do when combined with stronger U.S. policy to promote clean energy and discourage the burning of fossil fuels:

The not-so-good news is the last bullet: Reducing U.S. carbon emission by 13 percent by 2030, or even 21 percent under the more favorable clean policy scenario, won't do much to reduce the threat of catastrophic climate change. The report also found that by 2050, innovation in the modeled technologies alone reduced CO2 emissions by 55 percent and by 63 percent when combined with policy. Those are under best-case assumptions.

But, while there's lots of disagreement about all this, many reputable scientists, using respected climate models, say the world needs to reduce CO2 emissions by 70 to 80 percent by 2050, and that the U.S. share should be close to 80 percent. Here's the argument, as articulated by the Union of Concerned Scientists.

So, yes, by all means, let's invest in clean energy technology because it will be good for the economy in the long-term but let's also be clear-headed about how terribly difficult it is going to be to head off something that looks like a climate catastrophe. As White House science advisor John Holdren has said, there are fundamentally three ways to deal with the climate threat -- mitigate, adapt and suffer -- and this report suggests that we (more likely, our children or grandchildren) need to prepare for all three.

Yes, they do, and they will even if the costs of clean energy drop sharply. Here's a chart showing the U.S. power generation mix in 2030 under a variety of scenarios modeled by Google, using McKinsey's Low Carbon Economics Tool (LCET). Notice that even under the most optimistic scenario, a substantial portion of electricity generation will come from fossil fuels coal (the gray) and natural gas (the dark blue). You can click on the chart o enlarge it: 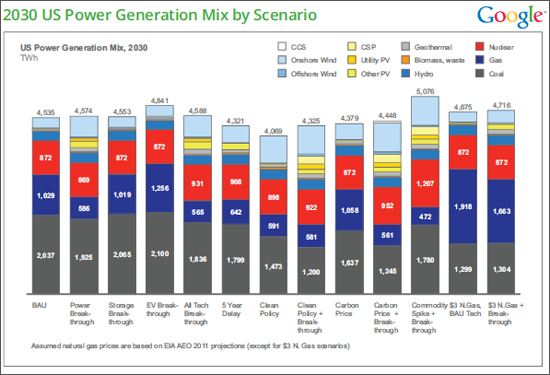 I asked Weihl what else he learned from the report.

"We were surprised," he said, "to see the extent to which aggressive innovation combined with modest policy gives you a kind of triple word score benefit -- economic gains, job gains and very significant emission reductions."

He wasn't trying to say that this is a "free lunch" solution. In the short run, he said, both government and the private sector will need to invest in research and development, and the scaling of newer, cleaner technologies. The government policies embodied in the models either put a price on carbon for the utility industry, which would raise the costs of coal-powered electricity, or they would mandate renewable energy generation for electricity, which would also mean that homeowners and businesses would initially pay more. 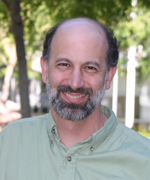 Washington policymakers are one of the target audiences for the Google study. The company wants to see investment in research.

"If there is one bottom-line recommendation in the short term, for the current budget discussion, it would be, 'don't cut R&D,' " Weihl told me.

There's lots more in the report, and Google has made the raw data available on a website that will occupy energy-policy geeks for hours.

Several other findings struck me.

First, reaching tipping points in electric-car battery technology "could be transformative." Rapid decreases in battery costs and increases in energy density could lead to electric cars and hybrids achieving 90 percent of new vehicle sales by 90 percent. This is great news for those who want to reduce America's depending on oil imported from repressive regimes.

Second, cheap grid-storage creates both significant opportunities and unintended consequences. Grid-scale storage makes it easier to bring large numbers of intermittent, renewable energy sources like solar and wind onto the grid. But, in the short run, if the costs of wind and solar power do not come down, low-cost utility scale storage could actually drive an increase in coal consumption because coal is so cheap.

Third, and this is obvious but worth saying, cheap natural gas could reduce GHG emissions in the short term by replacing coal but it is also likely to slow the deployment of clean energy sources in the long term.

Put simple -- and you knew this -- getting the change we need, when it comes to energy and climate, isn't going to be easy.