So far, it is helping add 2.6 gigawatts of wind and solar power to the global grid.

Sometime within the next 12 months, internet search and cloud services giant Google will be buying enough clean power on an ongoing basis to account for the electricity needs of both its 13 data centers (so far) and offices in more than 150 cities around the world.

This is not an insignificant load. Since Google declared its 100 percent commitment to renewables back in 2012, it has signed contracts that will help add almost 2.6 gigawatts of wind- and solar-generated electricity to the grid by the time all the projects are completely. While each of those installations has its own timetable for completion, at least 900 megawatts of those projects should come online within the next four to six weeks alone, according to one of Google’s energy strategy executives. In 2015, Google officially used 5.7 terawatt-hour of electricity — about the same amount of power used by the entire city of San Francisco.

The company’s agreements cover sites in five countries touching at least 20 projects, which are as close to the company’s actual operations as possible.

If you want to think about Google’s influence in a slightly different way, the contracts and power purchase agreements that Google has negotiated will account for about $3.5 billion in capital investment by renewable energy developers, said Neha Palmer, head of energy strategy, global infrastructure at Google.

"Access to renewable energy is something we look at when we site a data center," she said. 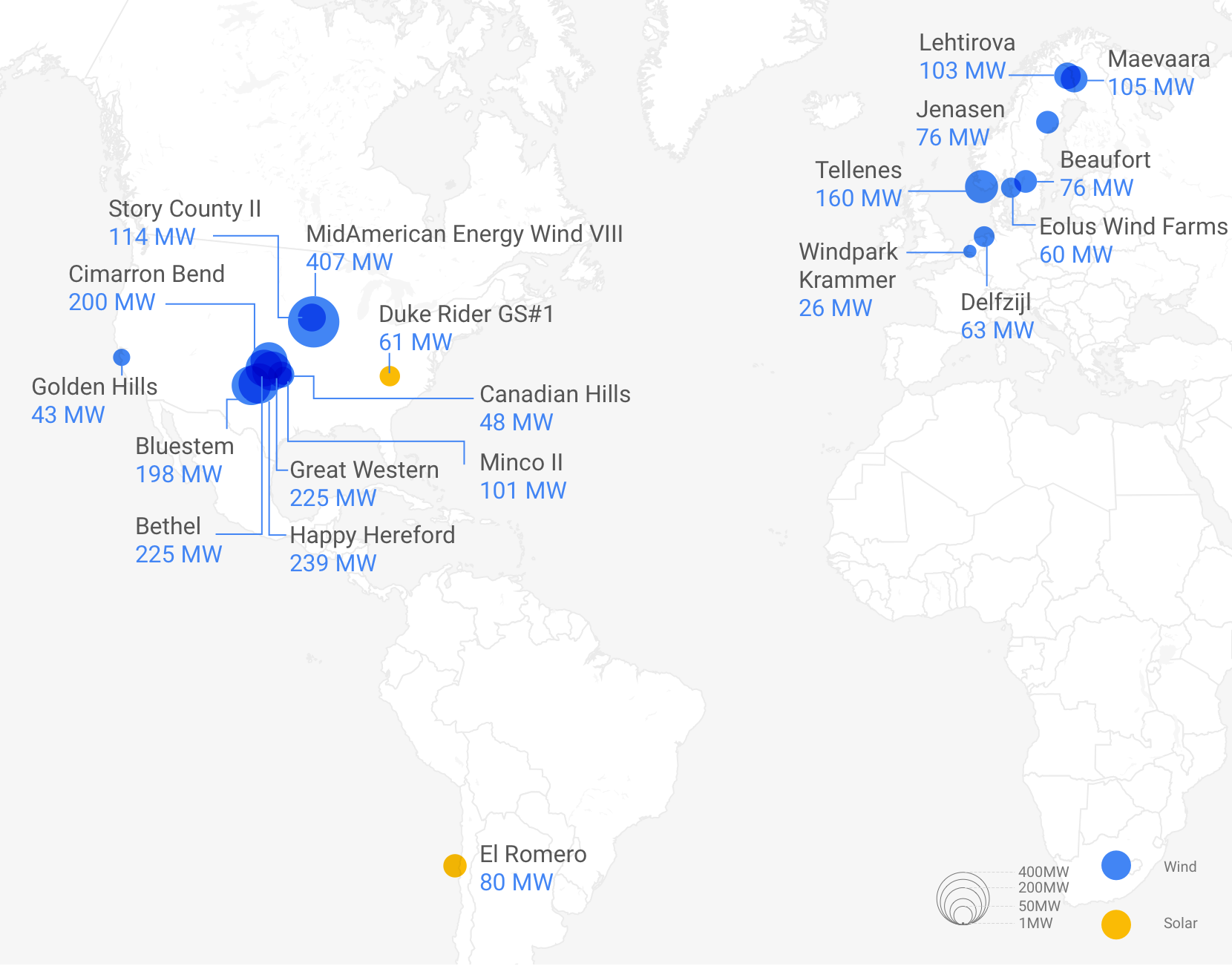 Reaching the "100 percent" goal required considerable ingenuity, and the declaration means something different, depending on the location.

In many places, for example, Google isn’t necessarily using electricity generated by a solar or wind farm, mostly due to the limitations of today’s grid, Palmer noted. Rather, the company has entered into a complex string of contracts whereby it is "buying" the output of an installation — and the related renewable energy credits — that it has helped add to a local grid. The actual power it uses directly at a data center or in an office building may or may not be generated with renewable technologies. In Oklahoma, for example, Google’s projects are structured in this way. It’s a balancing act. Literally.

Google also has helped inspire completely new contract frameworks. In North Carolina, it worked with utility Duke Energy to help develop the "Green Source Rider" tariff program. Under a contract disclosed by the two companies in November 2015, Google is buying a portion of the electricity required for its Lenoir, N.C., data center through Duke, which in turn is buying the power from the 61-megawatt Rutherford Farms solar project.

"Not only does it enable us to purchase renewable energy for our North Carolina operations, it will empower others in the state to do the same," Google’s data center strategy head, Gary Demasi, noted when the deal was announced.

Similar programs are being considered in eight other states, Palmer added. "We do a lot of transactions that are bilateral," she said.

In other places, including Chile and some locations in northern Europe, Google is able to buy clean power that feeds more directly into Google’s facilities. But even in those places the realities of today’s electric grid mean it can’t count on that power 24-7. "You can’t direct where the electrons go," Palmer said. "Regardless of the arrangement, we have changed the grid mix."

We do a lot of transactions that are bilateral.

That said, over the course of next year, all the clean power that Google is adding to the grid will offset what it’s using in aggregate. It "overbuys" in the central United States and northern Europe, where the economics make sense. And moving forward, Google wants to ensure that more of the electricity it actually uses can be traced to renewable generating sources. It insists on "additionality" — that is, any project it support must be adding more clean power to the grid. As the company notes in a white paper issued Tuesday:

For us, reaching 100 percent renewable energy purchasing on a global and annual basis is just the beginning. In addition to continuing to aggressively move forward with renewable energy technologies like wind and solar, we will work to achieve the much more challenging long-term goal of powering our operations on a region-specific, 24-7 basis with clean, zero-carbon energy.

Google describes itself as the largest corporate renewable energy purchaser in the world, although its two biggest rivals in corporate cloud computing services — Amazon Web Services and Microsoft — are doing their best to catch up.

For 2016, Bloomberg ranks AWS and Microsoft as the No. 1 and No. 2 biggest signers of corporate renewable deals, respectively. And that was before both companies disclosed massive new agreements in mid-November.

AWS is adding 180 megawatts of solar power in Virginia before the end of 2017, which makes it the biggest corporate backer of solar projects east of the Mississippi. Its cumulative buy will be 2.6 million megawatt-hours, through 10 U.S. renewable energy projects.

And Microsoft just doubled its wind energy purchases — it backs projects that will help bring more than 500 megawatts onto the grid in Illinois, Kansas, Wyoming and Texas.