<p>An expansion and extension of the NY-Sun Initiative aims to turn the Empire State into a solar powerhouse.</p>

In the last year, New York has become something of a solar powerhouse, jumping to 10th in the country in installed solar power in the third quarter of 2013. That growth is due not only to the precipitous drop in the cost of solar power in recent years — falling at least 40 percent since 2008 [PDF] — but also, in large part, to Gov. Cuomo's NY-Sun Initiative. Since 2011, that's been a coordinated program to stimulate the solar marketplace, create clean energy jobs and businesses, cut solar prices and reduce the Empire State's carbon footprint, which make it less vulnerable to extreme weather events such as Superstorm Sandy. NY-Sun already has produced impressive results. In fact, since the program began, more customer-sited solar photovoltaics have been installed in New York State than in the entire previous decade.

Now, as part of an expansion and extension of the program that the governor announced in the printed text of his State of the State address [PDF] on Wednesday, there's even better news for New Yorkers, who overwhelmingly support solar power: The already-impressive NY-Sun Initiative is about to become one of the most ambitious solar programs in the nation, with the governor committing, through a filing with the state's Public Service Commission, $1 billion to the program — that's right, $1 billion — over the next 10 years. (Gov. Cuomo's text also announces a major new program to help K-12 schools throughout New York go solar.) The governor's goal is to install 3,000 megawatts of solar across New York. That's enough solar to power 465,000 New York homes, cut greenhouse gas emissions by 2.3 million tons annually — the equivalent of taking almost 435,000 cars off the road — and create more than 13,000 new solar jobs.

The program has accomplished amazing things already. At colleges and universities across the state, for instance, it's helped fund solar arrays that cut energy costs and with them, the skyrocketing price of higher education. Better yet, these on-campus arrays are inspiring and educating a generation of young people about the benefits of pollution-free, renewable energy. (Most of these installations are run-of-the mill. But check out SUNY Buffalo's 750-kilowatt Solar Strand, designed by internationally renowned landscape architect Walter Hood.) 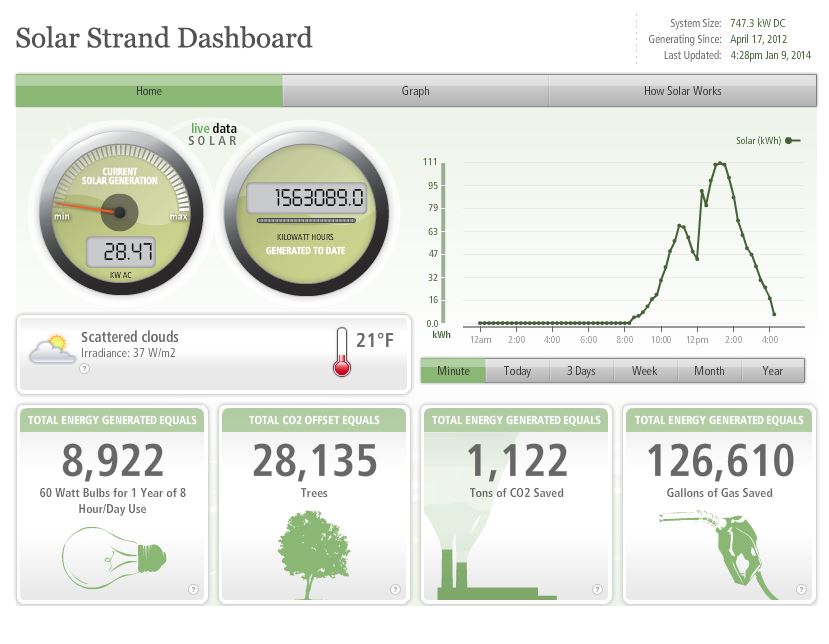 At manufacturing facilities including Owens Corning's Bethlehem factory upstate, not only are NY-Sun-funded solar arrays producing clean energy, they're also helping keep New York companies competitive, nationally and internationally, in this still-difficult economy. Homeowners, too, have benefitted from programs that are making solar a more affordable investment than ever.

The NY-Sun Initiative isn't just expanding the marketplace, though. A major function of the effort is to drive down the cost of installed solar power by establishing new, cost-effective and efficient practices and technologies. NY-Sun has set up its incentives in ways that yield the biggest bang for the program's buck. For large-scale solar arrays, for instance, NY-Sun requires a competitive-bidding process, so it can pick the lowest-cost contractor to design and install each system. That helps establish a going rate for solar in the state. Then, while some of its incentives are released during construction, the rest are paid out over the three years after the project is completed, to make sure the arrays work as promised.

The program has been instrumental in creating and incentivizing a unified solar permitting process for municipalities that streamlines the currently complicated and cumbersome process of local solar permitting. The adoption of this permitting process has the potential to knock as much as $1,000 off the cost of a residential system. NY-Sun is also promoting innovative, cost-saving solar equipment and system components.

That might all seem a little dull to the non-wonks among us. But some of the NY-Sun Initiative's projects are simply mind-blowing. The upcoming web-based New York State Solar Map, funded jointly by NY-Sun and the U.S. Department of Energy and to be released later this year by the City University of New York, will allow residents to type their addresses into the website, and, with the click of a mouse, calculate their site's solar potential, along with annual energy cost savings, return on investment, carbon reductions and local, state and federal incentives. The upcoming website, developed by CUNY and based on the amazing NYC Solar Map, is a transformative educational and outreach tool. It also has the potential to reduce solar costs for homeowners, businesses and institutions and cut the cost of customer acquisition for solar companies as well, by allowing potential solar customers to get the ball rolling without requiring an expensive initial onsite evaluation. Watch a video on how to use the map below:

Solar energy can be an important driver of economic growth in New York. The state already has more than 400 solar businesses at all levels of the supply chain that employ at least 3,300. The New York-Sun Initiative can help increase those numbers significantly, further cut the fast-dropping cost of solar, reduce our greenhouse gas emissions and produce electric power without the harmful air pollution that aggravates and sometimes even causes asthma among our kids.

NRDC commends Gov. Cuomo's efforts to realize the Empire State's incredible solar potential and finally turn New York into the real solar powerhouse it deserves to be by expanding and extending his already innovative NY-Sun Initiative.

Why are so many veterans serving in the solar industry?

See all by Pierre Bull