Three years ago, modular builder Project Frog made a splash at the international Greenbuild Expo with an eye-catching, energy-neutral classroom that was built on-site in just six days.

Today, the San Francisco-based company is setting its sights on accelerated growth with $22 million in funding from General Electric and some of GE's VC partners in its ecomagination Challenge.

The funding will fuel expansion of Project Frog's sales pipeline, including an increase in the size and types of buildings in its portfolio and the number of projects the company takes on, according to Project Frog CEO Ann Hand.

"This is a step-change year for us," she said of her company's plans and the investment that will enable Project Frog to pursue them. 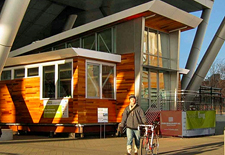 I first talked to Project Frog executives in 2008 as the company opened its "Frog Zero" classroom (pictured right) to the thousands who attended the U.S. Buildings Council conference that year in Boston. The structure became part of a three-classroom building that Project Frog created for the Watkinson School in Connecticut.

The school was among the early projects for the firm that specializes in high performance, energy efficient buildings. The buildings are constructed from pre-engineered components in shapes that can be put together in different ways to meet the needs of their owners. Think of a life-sized Erector Set or LEGOs for green building and you have an idea of how Project Frog's building systems work. 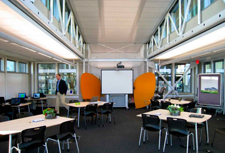 A Project Frog building is designed to be eligible for a LEED-Silver USGBC green building rating "out of the box," but be cheaper and faster to build -- and less expensive to heat and illuminate -- than a comparably sized, stick-built structure.

Completed building costs for a Project Frog structure can be 10 percent to 25 percent less per square foot than a traditionally built structure, not counting the benefits of reduced operating costs resulting from energy efficiency, said Hand. The company's structures generally use at least 25 percent less energy than those that comply with the strictest buildings codes in the U.S.

Initially focusing on classrooms and structures best-suited for learning, Project Frog is branching out to buildings for healthcare, retail and other commercial businesses. By the end of last year, the 5-year-old firm had completed 15 projects that encompass about 40,000 square feet of space. By the end of this year, the company intends to almost double that amount and bring total built square footage to "somewhere north of 70,000 square feet," Hand said. Project Frog hopes to more than double that amount next year.

In the challenge, GE's crowd-sourced star-search for green innovation, the industrial company called for the best ideas to advance the smart grid. It also was looking for green startups with potential for rapid growth that would benefit from investment by GE and ecomagination's VC partners.

Project Frog has increasingly integrated fixtures, equipment and technology in its buildings so that clients who wish to aggressively go green can buy a Project Frog structure fully loaded with the systems that can take them there. It would not be a long stretch for products from GE's portfolio to be included among the options for a Project Frog building. 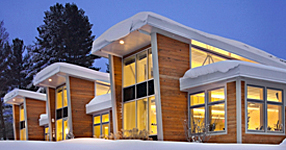 GE technology and systems will be showcased in a building that Project Frog will construct at the John F. Welch Leadership Development Center in Ossining, NY. The 4,000-square-foot building (see the rendering at the top of the page) will house networking, meeting and brainstorming space at the campus. The project, called the Green House, is expected to be complete by the end of the year.

Interestingly, the representatives for the center had identified Project Frog as the leading candidate to handle its building project, and Project Frog was in talks with another arm of the vast company about possible products for a Frog project with a municipal client, when the investment plan emerged.

"It was the ultimate trifecta," Hand said.

According to GE,  the situation was the latest example of the many touch points it can have with firms it invests in. "We like to bring more than money to all our investments," Angel said.

Image credits: Rendering of the planned new building at the GE Learning Center from Project Frog via GE. Photos courtesy of Project Frog.