Eco-conscious grocery shoppers say they remain committed to their green purchasing habits, but they've grown wary of "natural" labels and say there should be standards for products bearing that description.

The findings are among the results of a poll conducted by Mambo Sprouts Marketing to gauge the buying habits and the outlook of 1,000 consumers of organic and natural products. Mambo Sprouts is releasing its results in a study that will be available for purchase in January.

According to Mambo Sprouts:

Interestingly, Eco Pulse -- the annual survey conducted by green advertising firm Shelton Group -- has shown for the past two years that mainstream American consumers are more likely to reach for products labeled "all natural" or "100 percent natural" rather than "organic," often because shoppers mistakenly believe that use of the term "natural" is regulated. 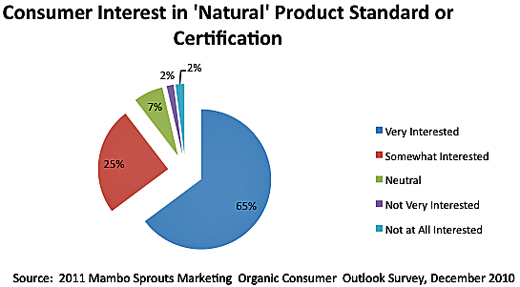 In its recent survey, Mambo Sprouts also asked green consumers whether their buying habits will change in the coming year if the economy improves. Mambo Sprouts specializes in marketing natural and organic products and provides free coupons for green grocery items and products and services provided by businesses that promote health, wellness and green living.

For the most part, respondents said they won't be scaling back practices adopted during the Great Recession -- such as finding the best value on eco- and healthy products, clipping or downloading coupons, and opting for store brand organic products -- even in better times.