Green Jobs, Green Technology in the Spotlight in New Report

In the run-up to the release of the federal government's national broadband plan, a coalition of groups are detailing the ways that green technologies can grow the economy while cutting the country's carbon footprint.

The report, "Networking the Green Economy: How Broadband and Related Technologies Can Build a Green Economic Future," was published yesterday by a coalition of groups, including the Blue Green Alliance, the Sierra Club, the Communications Workers of America and the Progressive States Network. It looks at how technologies including smart buildings, smart grids, teleconferencing and digital education opportunities can cut carbon emissions and create and retain green jobs in the United States.

"The broadband revolution is ‘Made in America,' and continues to create millions of jobs while fundamentally transforming business, education and government," U.S. Representative Ed Markey said in a statement. "Ensuring access to broadband while investing in new smart grid technology, the American Recovery and Reinvestment Act and the Waxman-Markey clean energy jobs bill will empower the consumer with money-saving energy-efficiency tools." 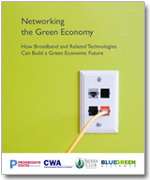 {related_content}The report outlines the technologies that can be applied to creating a low-carbon economy, and lays out the policy steps needed to achieve the goal of an efficient, highly networked economy.

Smart grid technologies figure prominently into the report's plans. Increasing the efficiency of transmission and distribution of energy along the electric grid could lead to energy savings equivalent to removing 53 million cars from the road. And applying smart meters to homes and office buildings could save the U.S. $20 billion or more in the next 10 years.

"The National Broadband Plan is an opportunity to build capacity in our states and communities to strengthen this critical infrastructure," Nathan Newman, Executive Director of the Progressive States Network, said in a statement tied to the report's release. "This report illustrates the positive impact that broadband and smart grid expansion will have for both people and the environment."

Among the policy recommendations in the report are increased access to broadband technologies, which can boost the impacts of initiatives like tele-health systems, projected to save 850,000 trips to emergency rooms per year and save $537 million in associated costs. The report also advocates funding and promotion for smart meters and real-time pricing strategies to create green jobs and save on individuals' energy costs.

Download the full report from GreenBiz.com; more details about the initiative are online at GoodJobsFirst.org.