Do you remember the heady days of the stimulus program, with all the talk of green jobs and "shovel-ready" projects?

Those days seem long gone (though they're likely to be back in the public consciousness as the American Reinvestment and Recovery Act funding ends at the end of the year) -- but green jobs and the businesses that create them are here to stay.

A new report, "Sizing the Clean Economy," was published today by The Brookings Institute and Battelle and offers what they bill as a first-ever look at current green jobs figures, including the number of jobs and how much they contribute to the economy.

The report covers green jobs between 2003 and 2010, and serves as a useful map of just where the clean economy can be found. The short answer: Everywhere.

There are about 2.7 million jobs that fall under the report's definition of green jobs, and they span a wide range of industries and sectors, from public transit to organic food and farming to smart grid. That's more workers than are currently in the fossil-fuel industry, and it's only going to rise.

Looking at the growth of jobs overall, the clean economy grew more slowly overall than the larger national economy in these eight years -- but look at the chart below to see the steady growth and the rapid boom that took place in 2008. 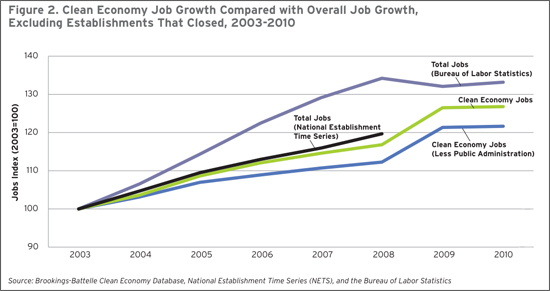 The report says that part of the intent of the research is to dispel some of the "speculation, assertion and partisanship" that have long surrounded debates about the green economy and green jobs.

And the findings solidly support the belief that building a green economy will be a panacea for our many economic and environmental challenges. From the report:


• The clean economy offers more opportunities and better pay for low- and middle-skilled workers than the national economy as a whole.


• The clean economy permeates all of the nation's metropolitan areas, but it manifests itself in varied configurations.

In short, supporting the green economy can rebuild the domestic manufacturing base, create new jobs at all pay and experience levels, and take a bite out of our trade deficit -- each clean economy job exports $20,000 per year, compared to $10,000 for the economy's average. All while spurring improvements in and adoption of low-carbon technologies.

The growth of clean jobs has taken place nationwide, in each of the 100 biggest metro regions -- but the biggest boomtowns are not where you might expect. Although New York and Los Angeles have the largest total number of clean economy jobs, they've also got the largest populations. The table below shows where clean jobs make up the biggest slice of the overall pie:

And here is the breakdown for what sectors have the most clean jobs:

Of course, the key to continuing the promising growth of clean jobs comes in support for the businesses that are creating those jobs. Far beyond passing another Stimulus Act (though that would no doubt help), the report offers four suggestions for how governments can keep the clean economy growing:

• Scale up the market by taking steps to catalyze vibrant domestic demand for low-carbon and environmentally-oriented goods and services.


• Drive innovation by investing both more and differently in the clean economy innovation system.


• Focus on regions, meaning that all parties need to place detailed knowledge of local industry dynamics and regional growth strategies near the center of efforts to advance the clean economy.

The full report, as well as detailed state-by-state and city-by-city breakdowns of clean economy activity, is available for download from The Brookings Institute.