Green marketing 101: Sell what they're buying

<p>In 2003, coal was king in Utah -- it meant cheap energy and plenty of jobs -- so the market for renewables was virtually nonexistent. Then two professors found a new way to talk about wind power.</p>

Here's how popular coal was in Utah in 2002: When the Winter Olympics were held in Salt Lake City, one of the official mascots of the games was a jolly black bear named Coal. Let others decry the air pollution and greenhouse gases that come from burning the stuff, in Utah coal was seen as an inexpensive source of energy, a reliable job creator, a huggable dancing bear.

Now imagine it's your job to break up this romance. Specifically, your twin assignments are to whip up public support for wind power and convince state legislators to pass tax incentives for renewable energy. Keep in mind that you'll be doing all this in a region where hunting, fishing and snowmobiling are higher priorities than protecting the environment. And did I mention that the last bill requiring utilities to develop clean energy went up in smoke?

Such was the task taken on by Cathy Hartman and Edwin Stafford, two marketing professors at the Jon M. Huntsman School of Business at Utah State University. In 2003, Hartman and Stafford volunteered to be part of the Utah Wind Working Group, a cross-sector forum of environmentalists, coal utility executives, educators, community leaders and other stakeholders who generally didn't play well together.

Given their considerable marketing expertise, Hartman and Stafford were confident they could help design an effective public awareness campaign, but they had no illusions about the team they had to lead. "I often felt after meetings that we hadn't made any progress and were just stumbling around," Hartman told me. What started as a forum of 50 quickly evolved into a smaller working group of about a dozen. First task: come up with a slogan for the campaign.

Repositioning Wind Power: Take 1
One of the first slogans to emerge from the brainstorming was "The Answer is Blowing in the Wind." While it was a clever play on words, the group agreed it evoked a 1960s feeling that didn't match the cutting-edge aspects of the technology they were marketing. "Homegrown Alternative Energy" enjoyed a brief moment in the sun, but the group worried that the first word would suggest something you smoke, while the second would conjure an entire lifestyle that was inconsistent with local values.

Anticipating the arrival of summer -- which meant drought season and water shortages -- the working group considered a more topical angle. Coal and gas-fired power plants require millions of gallons of water to generate electricity, but wind turbines use none at all. "Wind Power Saves Water" promoted a distinct benefit and seemed like a timely message, so this was the first slogan to go public.

The campaign was a dud. Pitches to the media fell on deaf ears, a web site that was set up to provide more information saw no increase in traffic, and the only noticeable response was anger from power plant representatives who felt they were being unfairly picked on. Reflecting on this initial stumble today, Hartman and Stafford acknowledged a fundamental mistake. While they knew in advance that environmental protection was a low priority for their audience, they opened their campaign with a conservation-themed message.

Take 2: It's the Children, Stupid
Fortunately, Hartman and Stafford's group had a back-up plan. In September, children around the state would be going back to school, so public education would be top-of-mind once again. Utah ranks last among the 50 states in funding per student, so a plan that could generate more money for schools would clearly be a hot topic. 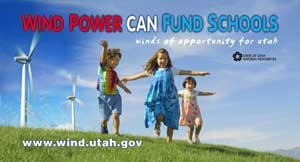 In Utah, about 75 percent of property taxes go directly to local schools. If an empty piece of land was developed into a wind farm, its value would increase, property taxes paid by the landowner would go up, and more money would funnel to schools. So the group felt it was fair to use the slogan "Wind Power Can Fund Schools." The group plastered this on billboards and bumper stickers. They also pitched it to op-ed writers and politicians during the next phase of the campaign.

This time around, Hartman and Stafford knew they had a winner. Hits on the web site spiked as residents tried to find out exactly how wind power could help fund their schools. "We could see legislators quoted in print saying, 'Hey, this is going to fund our schools,'" said Stafford. Wind Powering America, a nationwide initiative of the US Department of Energy, picked up the slogan as well.

With public support building, politicians were more inclined to consider tax incentives that the working group had been recommending all along. In 2004, Utah's state legislature passed a sales tax exemption on equipment used to produce renewable energy. "If you're buying wind turbines," Stafford told me, "that [exemption] represented hundreds of thousands of dollars in savings." This incentive paved the way for construction of a large-scale wind farm in Spanish Fork in 2008 and a second farm in Milford the following year.

Wind power is still a small contributor to the electricity produced annually in Utah, but the conversation about renewable energy has definitely changed. "Before the campaign," Hartman said, "it was considered unreliable. If the wind doesn't blow, my lights go out!"

And after the campaign? "Wind power can fund schools," Stafford chimed in.

How to choose a customer engagement strategy that works

See all by Andy Goodman