The 'Green New Deal', carbon pricing and other policies that could shape 2019

Here are 3 legislative and regulatory battlegrounds likely to affect business strategies in the 12 months to come.

As the threat that climate change poses to civilization becomes clearer, more voices across the political spectrum call for governmental action to slow average global temperature increases and adapt to the impact on natural and human-made infrastructure.

Here are three developments likely to shape business strategy in 2019.

A growing number of government and business leaders are talking up policy options that put a price on carbon, levying a fee or tax on companies, organizations or individuals that reflects the negative socio-economic impact of carbon dioxide emissions (CO2). The idea is to encourage the marketplace to develop the best possible tools and systems to reduce greenhouse gas emissions and to make emitters more directly responsible for funding those solutions.

Market-based policies to curb greenhouse gas emissions are already in use in 11 states, covering more than a quarter of the U.S. population and a third of GDP. While more work needs to be done to integrate the effects of climate change further into economic models, many leading economists agree that a global price on carbon is the way forward (PDF).

Last year, William Nordhaus and Paul Romer were awarded the Nobel Prize in economics for explaining how climate change and technological progress affect long-term economic growth. Nordhaus’ work has led him to the conclusion that part of the solution to climate change is a universal carbon tax.

And according to a 2018 World Bank report, carbon pricing is gaining global traction. As of this writing, 46 national and 24 subnational jurisdictions around the world have or are planning to put a price on carbon. This includes China, the world’s top greenhouse gas emitter, whose Emissions Trading System is scheduled for implementation in 2020.

However, a 2018 Organization for Economic Co-operation and Development report points out that national governments need to raise carbon prices much more quickly if they are to meet their commitments under the Paris Agreement.

More voices across the political spectrum call for governmental action to slow average global temperature increases and adapt to the impact on natural and human-made infrastructure.

Critics contend that a carbon tax does not guarantee a specific level of emissions reduction, but studies have shown that design elements such as a "ratcheting mechanism" that adjusts the tax upward if initial reductions are too low can solve that problem.

A number of conservative and libertarian groups favor some form of carbon tax, including RepublicEn (an "eco-right" advocacy outfit that supports free-market climate change solutions), the Niskanen Center (a libertarian organization that embraces the scientific consensus on climate change) and the R Street Institute (a right-leaning Washington think tank).

The Climate Leadership Council, a research and advocacy group formed for the purpose of advancing the "most cost-effective, equitable and politically-viable climate solution," proposes a revenue-neutral carbon dividend plan. The conservative-leaning Chicago Tribune editorial board published a resounding endorsement of the plan, noting, "Americans don’t have to choose between a free, thriving economy and a healthy planet."

In November, three Democratic and two Republican members of Congress introduced the Energy Innovation and Carbon Dividend Act, which places a price on carbon pollution and adjusts that price to meet emissions reduction goals. It's just the latest in a series of proposals swirling around Washington over the past 12 months.

While it’s too soon to tell if this latest bipartisan bill will have enough support to pass in the new Congressional session, it has been endorsed by a number of activist groups and think tanks across the ideological spectrum, including the Climate Leadership Council. Some NGOs, including the Natural Resources Defense Council, are concerned that the bill includes restrictions on carbon pollution limits under the Clean Air Act but even it still support the bill’s overall design.

As of this writing, at least 15 Democrats have committed to the "Green New Deal" proposal put forth by Rep.-elect Alexandria Ocasio-Cortez (D-NY). The idea describes a massive economic stimulus package aimed at tackling climate change and environmental issues by 2020. 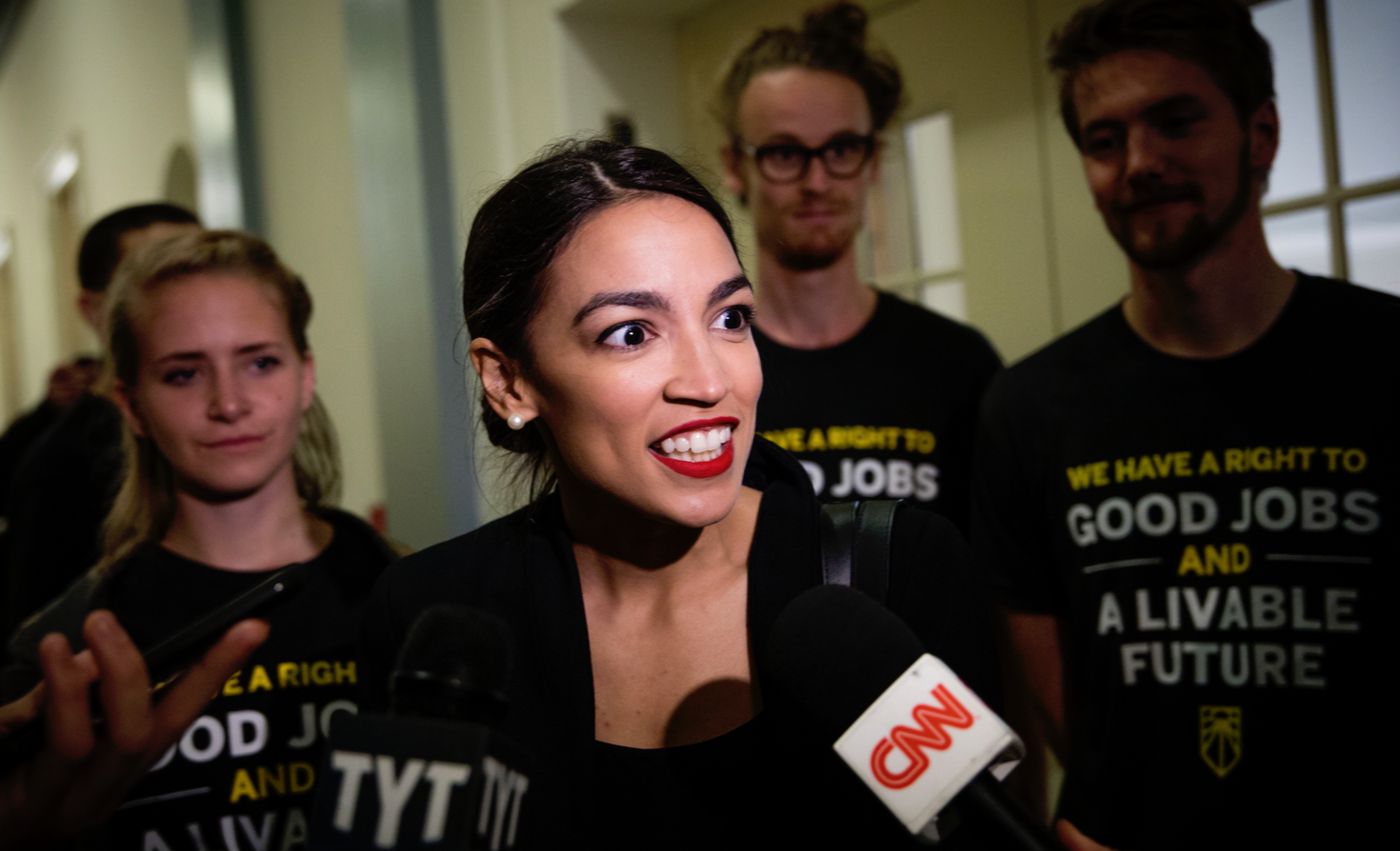 While there is no unified consensus on what would constitute a Green New Deal, some elements likely would include:

Ocasio-Cortez also has called for the United States to transition to 100 percent renewable energy within 10 years. However, a recent scientific study supported by the Dutch Ministry of Infrastructure warned that the renewable energy industry could be about to face a fundamental obstacle: shortages in the supply of rare metals that are critical components of such technologies as solar panels and wind turbines.

Any proposal along the above lines is likely to face a major uphill battle. Not only does it have no Republican support, but there are ongoing, mounting signs of tension among Democrats between party leaders and insurgent progressives such as Ocasio-Cortez.

House Democrats’ selection Dec. 20 of Rep. Kathy Castor (D-FL) to head a revived panel on climate change all but ended Ocasio-Cortez’ efforts to create a select committee tasked with drafting legislation for the Green New Deal. Nevertheless, even if the specific proposal she envisions does not materialize, the movement behind The Green New Deal — including the youth protests that have surrounded it — is likely to push Congress closer to some form of federal climate plan.

3. Regulations to put the brakes on transportation emissions

Transportation has surpassed electric power to become the top greenhouse gas emitter. At the same time, the Trump administration has been working to ease emissions and fuel economy restrictions on cars and trucks as part of its broader deregulatory agenda.

This has put the administration at odds with California, which, under federal law, has a unique authority to write its own clean-air rules and to mandate more zero-emissions vehicles. President Donald Trump is challenging California’s rule-writing power, while California and 17 states that follow its lead have vowed to retain their stricter standards. A lengthy court battle is likely, and it could split the U.S. auto market in two.

Other states are teaming up to reduce transportation emissions, too. Twelve Northeast and mid-Atlantic states have announced a collaborative plan to cap and reduce carbon emissions from transportation in their region. Any plan that could drive up gasoline prices raises the specter of disproportionate impact on low-income populations, so the states’ announcement included an agreement that the program should "improve transportation equity for currently underserved and overburdened populations."

While details of the Transportation and Climate Initiative have yet to be ironed out, the participating states — Connecticut, Delaware, Maine, Maryland, Massachusetts, New Hampshire, New Jersey, New York, Pennsylvania, Rhode Island, Vermont and Virginia, along with Washington, D.C. — say they intend to funnel revenues from the initiative into "low-carbon and more resilient transportation infrastructure."

One thing is clear: Despite an extended period of lukewarm action at the federal level, efforts to address climate change with policies seem to be gaining momentum.

In a development that surprised many, the U.S. Environmental Protection Agency announced plans in November for more stringent nitrogen oxide emission restrictions on diesel-powered, heavy-duty trucks. It was a move that won the administration rare praise from environmental groups. The Cleaner Trucks Initiative also enjoys support from the industry.

The EPA did not put forward a specific proposal, but it plans to begin a formal rulemaking process. The initiative constitutes an uncommon point of general agreement between the Trump administration and California officials. However, as it does not cover carbon dioxide and methane emissions, it is unlikely to cool states’ other efforts to mitigate and tame emissions from the transportation sector.

Much remains to be seen about how the above policy proposals and initiatives play out. But one thing is clear: Despite an extended period of lukewarm action at the federal level, efforts to address climate change seem to be gaining momentum at both the national and subnational level that clearly could affect future business strategies.