Despite efforts to improve operations, cruise ships that ply North American waters must go a lot further to become environmentally responsible, says Friends of the Earth, whose latest report card on the industry gives 11 major cruise lines green grades ranging from B- to F.

Holland America Line, which received a B-, had the highest cumulative grade in the review of 11 cruise lines and 113 of their ships. Norwegian Cruise Lines came in second in the rankings, also earning a B-. Luxury travel line Crystal Cruises received the worst final grade, an F, which the firm disputed as unmerited.

While acknowledging that some lines are stepping up their environmental efforts, all of them should be doing more, said Marcie Keever, the director of Friends of the Earth's Clean Vessel Campaign.

"If they're going to be coming into our waters, they need to be behaving better -- they need to be the best they can be," Keever said in a phone interview with GreenBiz.com about her organization's second annual "Cruise Ship Environmental Report Card," which has set off an ocean storm of controversy about the validity of its assessments.

The cruise lines responded through the industry group Cruise Lines International Association, which called the report card and process used to produce it "flawed." Crystal Cruises spokeswoman Mimi Weisband echoed the assessment, saying the report card doesn't present a full picture of cruise line environmental practices. If it had, Crystal Cruises -- whose environmental management system has been ISO certified since 2004 -- "deserved an A ... if not an A+," she said.

“It is unfortunate that instead of contributing to a meaningful scientific dialogue about protecting our oceans, FOE continues to use innuendo and misstate the facts to advance its agenda," the cruise line association said in a statement emailed to GreenBiz. "This 'report card' is not based on science, law, or the facts, and like its last one, is rooted in FOE’s own arbitrary and flawed criteria.

“CLIA member cruise lines meet and often exceed all applicable international and federal environmental standards enforced by U.S. authorities and others around the world."

The force of the association's salvo matched that of FOE's strongly worded news release on the report card in which Keever is quoted as saying:

“From ending the use of dirty fuel that pollutes the air to stopping the disgusting practice of dumping sewage and other waste into the sea, it’s time for the cruise industry to clean up its act. The unfortunate reality is that, at present, many cruises harm marine ecosystems and the health of people who live near ports of call.”

A snapshot of the report card appears below. An interactive version that provides information on each of the lines, the ships included in the review and the basis for their grades is available at www.foe.org/cruisereportcard. 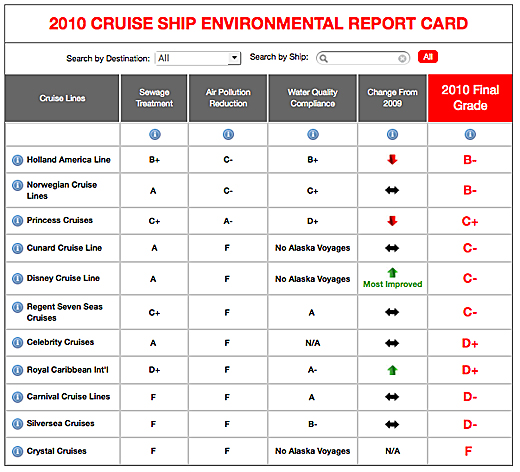 The report card singled out Disney Cruise Line as the "most improved" among the lines that were graded and recognized Royal Caribbean International for making improvements. In 2004, Royal Caribbean was hailed by the nonprofit advocacy group Oceana for installing advanced waste treatment systems on three ships and saying that the equipment would be added to the rest of the fleet and any new ships, although no timeline was set for the process.

To compile the report card, Friends of the Earth graded each ship in each line in three categories -- sewage treatment, air pollution reduction and water quality compliance -- in relation to its travel in North America. The three grades were averaged to come up with a grade for each ship. The ships' grades in each category were averaged to produce the final grade for each line

Keever said her organization used information culled from the Internet, government and other public sources, the cruise lines and their sustainability reports as a basis for the grades. Then it provided its findings to the cruise lines for verification before issuing the report card. Some responded, most didn't.

The environmental group thought all 15 ships in the line have the equipment; Holland America said 12 do. With 80 percent of its ships having an advance system in place, the line received a B+ grade in that category.

As to the other areas in which grades were given, the organization based its:

Keever said the organization based the water quality score on performance in Alaskan waters because the FOE considers the state a model for regulating commercial passenger vessels.

In 2006, a voter-approved initiative called for strict limits on wastewater discharges by large cruise ships in Alaskan waters. Faced by industry protests that the limits were too difficult to meet, state lawmakers passed compromise legislation last year that postpones the measures from taking effect until 2016.

Until then, big cruise ships that discharge wastewater in Alaskan waters are required to use the “most technologically effective and economically feasible” wastewater treatment available, according to the Alaska Department of Environmental Conservation. In issuing its cruise ship discharge regulations in April for the 2010-2012 seasons, the department said that for now advanced wastewater treatment systems are deemed "the most effective approach currently available for vessels."

In taking exception to the FOE report card and its grading system, the cruise industry association and Crystal Cruises criticized the environmental group for downgrading ships that are not equipped with shoreside power plug-in technology or advanced wastewater treatment systems.

The industry organization and the cruise line maintained that the FOE criteria didn't take into account that ships can use other methods to treat wastewater effectively and be in compliance with discharge regulations. The cruise line association also said FOE used "wastewater targets in Alaska not yet in effect" in grading ships.

"We felt it was a very limited and flawed report," said Weisband for Crystal Cruises, which issued a "setting the record straight" statement yesterday.

"We're the Four Seasons of cruise lines and we take this very seriously," she said, pointing to the company's Crystal Clean Environment practices and policy. "In fact, there are so many efforts that are in place that I felt this was a really, really incomplete report that was based on selective research and subjective criteria."

Crystal Cruises hasn't traveled to Alaska since 2005. But when it did and was home-ported in San Francisco for the trips, the city's Environmental Advisory Committee awarded the company for exceeding regulations and industry standards for reducing air and water pollution. Last year, the company's ship Crystal Symphony became a three-time winner of an environmental award for wastewater management from the Ports of Stockholm. And in Italy, Venice recognized the company's efforts to reduce emissions with a "Venice Blue Flag" award.

The company is set to resume Alaska cruises in 2011, said Weisband, adding that Crystal Cruises satisfied "a rigorous environmental review" to do so.